Happy Jack: A Day in the Life of one of Southwest's Biggest Fans 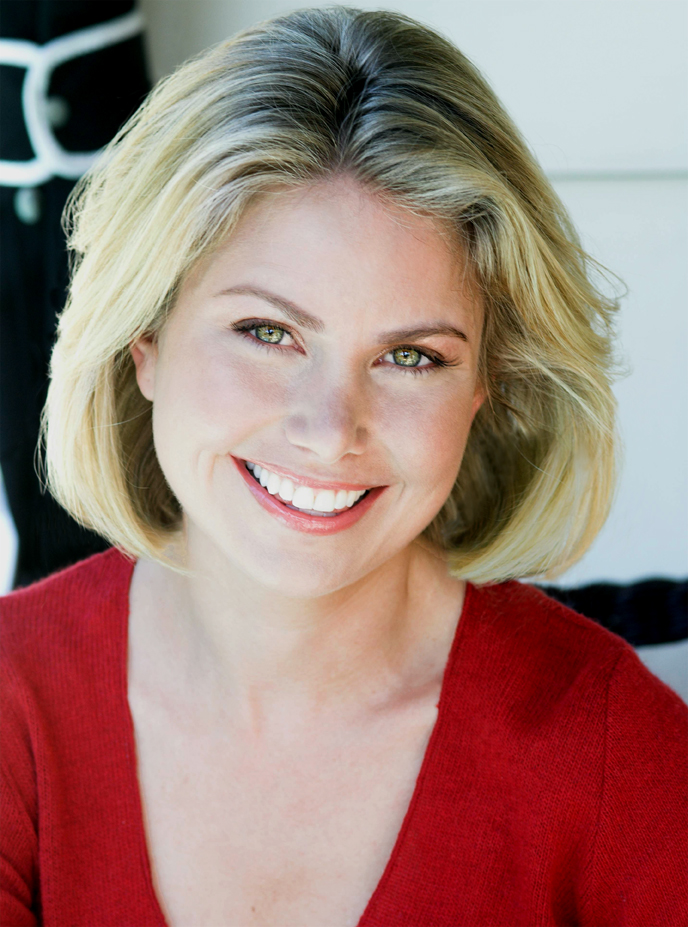 Jack Henry has been ‘geek chic’ for Southwest Airlines since his first SWA flight 2 1/2 years ago. Like most little boys, we considered his penchant for planes to be fairly typical, but Jack’s love of planes was specific to SWA.  He talked so much about Southwest that the following year, when we made our summer vacation plans, we specifically decided to fly Southwest as we knew it would thoroughly delight Jack. This flight only fueled his fire for all things SWA, which we found useful in negotiating that tricky period in the morning of trying to get breakfast made with two hungry toddler boys. While I prepared breakfast, I would let Jack watch a YouTube video of SWA on the condition that he had to type out “Southwest Airlines” into the computer.  So at the age of 3 1/2, although he couldn’t spell his first name, he could most definitely spell Southwest Airlines!  I thought, of course he would want to watch videos with planes taking off, but he quickly learned how to navigate YouTube and his favorite videos included information about SWA and general air travel.  Jack’s favorite videos are, ‘A Day in the Life of Reservations’, ‘A Day in the Life of Cargo’ and his number one favorite, ‘A Day in the Life of the 25 Minute Turn’.  And, oh yes you can bet he’s a bit sweet on Miss Christi McNeill.

With all of Jack’s SWA enthusiasm, we wanted to do something special for his 4th birthday.  We thought it would be great if we could get him a tour of SWA at our local airport in Los Angeles.  As you can imagine, this is not as easy as you would think.  However, SWA’s customer-friendly team (led by the amazing Ashley Pettit) went out of their way to make it happen! 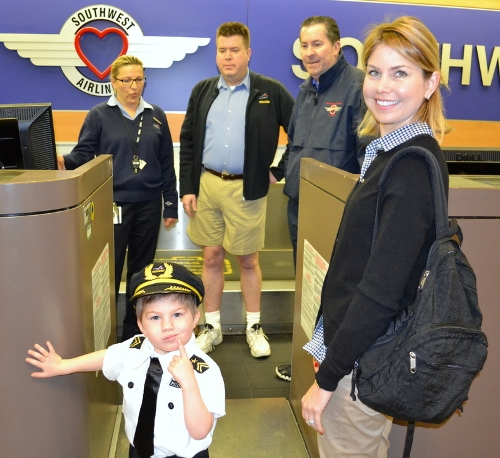 Our young pilot’s day began at 5:30 a.m. in preparation for our 7 a.m. tour at LAX.  There we were greeted by SWA’s John B., who gave Jack a gift of an official toddler-sized SWA pilot hat and a SWA toy set. Talk about knowing how to get straight to Jack’s heart! Jack dressed in his pilot uniform, capped with his official SWA pilot hat, relished in the attention and proceeded to tell everyone he was a pilot for SWA and that his little brother James was his Copilot. 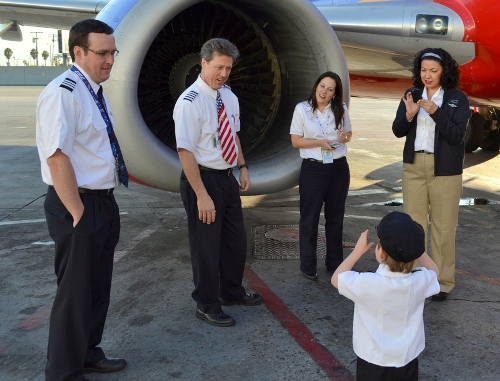 John gave Jack a VIP tour, spending over an hour and a half with us, taking us to baggage, to maintenance, and to the flight tracker room, (you'd think boring, but oh no, Jack was eating all of it up).  Afterward, John took us onto the tarmac where Jack checked out air stairs, a provisioning truck (or as Jack calls it, ‘the food truck’), aviation pushbacks, the wheels of a plane, and the baggage compartment.  One of the ground crew guys came over to say hi and gave Jack a lift up into the baggage compartment. Then he did the ultimate and gave Jack a pair of light sticks!  (Since then he’s been waving in planes from our front balcony!). 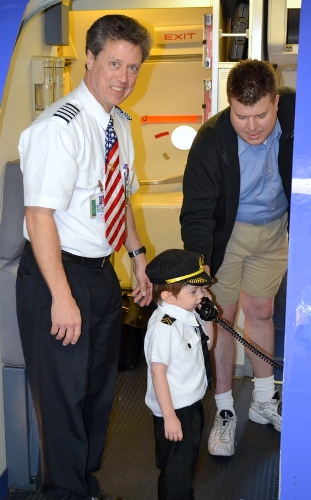 You may be wondering if this tour could get any better…well, it did.  Captain Scott Kirk and First Officer Drew W. graciously agreed to arrive early to greet our birthday boy.  Captain Kirk was so delightful with Jack in the giving of his time and enthusiasm. Not knowing John had already given Jack the SWA toy set, he also purchased one for Jack, which really touched us. 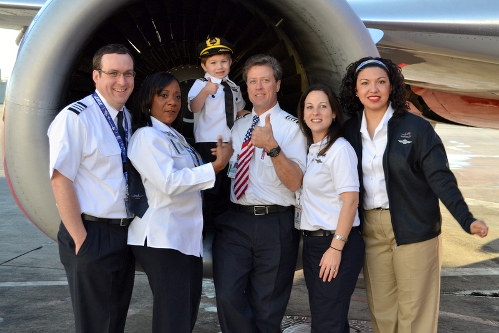 I feel that my words do not convey the generosity of Captain Kirk, the crew and John B. shared with Jack Henry and all of us that day, but I hope you can start to get a glimmer of it. And so, it is with heartfelt gratitude, we thank the magnificent team at Southwest Airlines: Ashley Petit, John B., Captain Scott Kirk, First Officer Drew W., the Flight Crew, and all the other SWA team members who contributed to a most wonderful ‘Day in the Life of Jack Henry’ that will likely become a cherished lifetime memory.

470 Loves
14 Comments
Hayley
Not applicable
Wow, what a great day for a very cute little boy. Southwest, you are absolutely the BEST!
5 Loves
Jeanne_Landry
Not applicable
Jack is adorable! He certainly has great taste in airlines! We are a Southwest family all the way! All 5 generations of my family fly Southwest, from my Mom, myself, my daughters, my grandkids, & my great-grandson! I look forward to the day that I can fly with Captain Jack Henry! I bet he'll be an awesome pilot!
5 Loves
megan
Not applicable
Wow! What a great story. Happy Birthday Jack! The pictures are priceless!
6 Loves
Liz_Clifford
Not applicable
Arriving at curbside check in at Port Columbus, Ohio at 9:00 a.m. for a 9:20 flight,on Tuesday, Feb 21st, I was thinking no way am I going to make this flight. (I will be honest....I overslept and add to that it was a rainy messy morning trying to get to airport through rush hour morning traffic which was horrible). One of the gentlemen quickly took my bags, got them tagged (late check-in tag of course!) and said he would do his best to get my bags on the flight. No guarantees. As I was hurrying to get to security check point, I crossed paths with this gentleman personally wheeling my bags through the terminal himself! I made my flight with 5 minutes to spare....whew, now wondering if my luggage made it. Arriving at my destination (Houston Hobby)....found my way to baggage claim. As the luggage began to come through and go around and around (saw the same yellow bag 4 times!), was beginning to think my bags did not make it. Then realized I was standing at the wrong belt!! When I got to the right belt.....there they were!! :) Once at my daughters house and opening my luggage, found that one of the bags had been opened and inspected. I have no problem with this, we must do what we have to do. The contents of my bag had not been disturbed at all! I only mention this because this extra step, added to my late arrival, just surprised me even more that my bags made it. In my panicky, stressed state at curbside, I didn't even try to dig into my purse to find a tip for this gentleman. He SO deserves one. I only wish I could find out who he was and honestly get something to him. I love Southwest!!
6 Loves
jennifer_Castro
Not applicable
What an awesome story! And a big giant Thank You to SWA for making it happen. I bet he'll remember it for the rest of his life! You guys rock!
22 Loves
Brett_Brennan
Not applicable
Back in the 1950s when I was Jack's age, I was lucky in having a father who flew constantly for business, and, thanks to the society of the times, took me with him on many business trips. I had the same experience little Jack has been lucky enough to have been given: tarmac tours, seeing the maintenance hangar up close, sitting on the pilot's lap an "flying" the airplane. It was wonderful experience! I am so proud of Southwest being able to do the same for a youngster today. Thank you all for giving me a warm story to brighten up my day!
19 Loves
Anne_Lewis
Not applicable
What a great story! And you couldn't get better PR for SWA...
25 Loves
Howard
Not applicable
Jack Henry's parents should get him Microsoft Flight Simulator. He can fly SWA's 737 there on his computer. Warning - you must have afast computer.
14 Loves
Ruth_Crook
Not applicable
This little boy WILL be a pilot when he grows up. My son had a similar obsession with the fire department at the same age. And he is a firefighter.
17 Loves
Amy_Denton
Not applicable
What a delightful story! Jack is absolutely beyond cute. My family is Southwest all the way, been flying them since we moved to Texas in 1981.
18 Loves
Joyce_Ownbey
Not applicable
I know this was a great day for Jack, how cute is this! I know my grandson, Connor (11) was excited the day he got to sit in a cockpit seat of a Southwest Flight leaving Raleigh, NC. He felt right at home, since he wants to become a pilot like his Uncle Andy who is a SW pilot. Yeah for the personal touches of SW!
22 Loves
Nita_Gamache
Not applicable
What a GREAT UPLIFTING story and a cute "little man". SWA is always my carrier of choice. Today when daily news is so gloomy, nice to see SWA providing some sunshine...Time for America to "move about the country"!
19 Loves

rvoit
New Arrival
Looks like the next great Southwest TV ad, to me! Produced correctly this would go viral! Way to go, SWA.
24 Loves

rvoit
New Arrival
Looks like the next great Southwest TV ad, to me! Produced correctly this would go viral! Way to go, SWA.
19 Loves

Building a Foundation: An Update on our Commitment to Inclusion

Traveling to Cancun on Saturday

Southwest points are no help

Apply to be a Southwest Airlines Flight Attendant