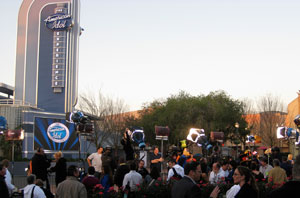 American Idol has become a juggernaut of American TV and has launched a number of similar shows in other countries—but if you want to experience American Idol without actually having to wait with thousands to audition, or know someone who works at Fox to get you in the TV audience, you need to go to Disney’s Hollywood Studios and the American Idol Experience in Orlando. (pictured above with the media in front.) The following is my first hand report to accompany my Red Belly Radio podcast about this event.

It was sort of a last minute thing, I was asked to go to cover the event with Olga Romero from our Public Relations Department and one of our superstar Flight Attendants Bruce Campbell (pictured left with Mitch English from the Daily Buzz) to go interview and be interviewed at this year’s Disney Resort Showcase. As it worked out for me, the showcase was to feature the new American Idol Experience, and I am a huge fan of the show. (My boss had no idea.)

It began with a parade. Each idol perched on the back of his or her own convertible 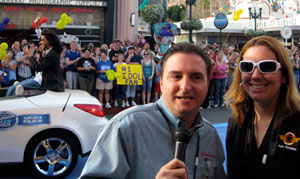 was driven down the main street of the Disney Hollywood Studio theme park. (me pictured below Olga and Sanjayah) The Oscar’s and other award shows have red carpet—this one had blue. Not just any color blue—American Idol blue!

After all of the Idols were driven down the carpet lined street waving and being interviewed by former Idol Kimberly Locke for Entertainment Tonight, they one-by-one got out, worked the line, and made their way into the theater. Lucky for me, we were already seated (on the fourth row—cool!) and got to see a lot of them come in.

After a very funny comedian kicked off the event, the host (not the actual Ryan Seacrest, but a good facsimile) took over. He welcomed the crowd and instructed us to be very quiet, just as they do on the show before Ryan announces the now famous……”THIS, is American Idol!” So we all got quiet, the theme music started, and, of course, the real Ryan Seacrest made the announcement.

Ryan kind of took over emceeing at this point, I guess he’s earned it, and introduced the five contestants who would be singing that night. These fab five had gone through the audition process earlier that day and wound up singing to what was the most musically and media-influential audience they will probably ever sing to. I can’t imagine the nerves they were feeling but they all sang very well. 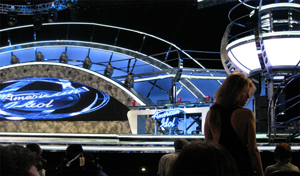 At 750 seats, the American Idol Experience Theater (right) is smaller than the Kodak Theater, but it looks like the real deal. You know that animated logo on American Idol that is several spinning concentric circles? Disney recreated them on each side of the stage—just like in the Kodak. That big arch of a video monitor that plays all the patterns of video behind the singers? Yep it’s there, too.

And of course there are the judges. The three judges seemed to remind me of three other judges I have seen somewhere. The first judge typically proclaimed a solid performance and called the performers “Dawg.” The second judge was a pretty woman who commented on the outfits and "loved their spirit," and the third said what everyone is thinking. He happened to be a Brit, and he also happened to be named Simon. Coincidence? Is anything left to chance at Disney?

While the contestants were singing, a camera operator jumped up on stage and ran around behind the singer to get the shot with the SteadyCam. Seeing the workings of the show is very different than watching it on TV—I have never been to an airing of the American Idol TV show, but I feel pretty safe in saying that the American Idol Experience is a LOT like actually going to Hollywood! 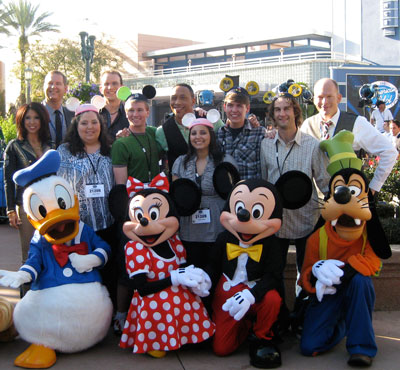 They each took their turn singing and the audience watched a recap—just like on the show. Unlike the TV show, we used a keypad in the armrest of our seats to vote. They eliminated the bottom two, and then the third place, and then went to the old “And the winner will be announced after this!” On cue, the audience groans but we were well rewarded for the wait. (Pictured right: the five contestants, the three judges, and the two producers. The four in the front row are believed to be unknown gate crashers.)

American Idol season seven winner David Cook came out and sang a song with his band. Then Carrie Underwood came out with her group, sang one song, and then started “Go your own way” by Fleetwood Mac and David Cook joined her to make it a duet.  Maybe because I had not heard the song in some time, or because I was so star-struck by Carrie (trust me, she looked good), or because I was just so pumped from the event, their version was fantastic!

They went back to the show-at-hand and announced Mark Ellis as the winner. I talked to him later that night, and he was very excited and a real nice guy. He won the golden ticket which can put him at the front of the line at any real American Idol audition. As it works out, Mark will be testing one quality of the Experience. Anyone can audition and sing and even win, but if you are too old to actually be on the TV show, you can give your ticket to someone and they can attend the audition and laugh at the thousands waiting in line. So Mark, being the heck of a guy he is (and technically too old to be on the TV show), opted to give his go-to-the-head-of-the-line card to that night’s second place singer, Alaina.

Back to the show: With David and Carrie already on stage there was only one thing left to do. Have you ever noticed that the winner of American Idol does not get some kind of trophy for their accomplishment? Well they do now. 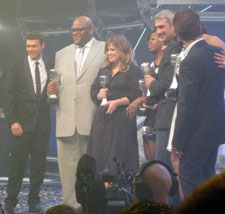 The other five Idols were brought out and presented with the new trophy, and all Idol winners going forward will receive one on the season finale. It was the first time all of the American Idols were assembled in one place.

For details on what happened the next day, you will need to listen to Red Belly Radio. I talk with Chris Sligh, Phil Stacy, Brooke White, Melinda Doolittle, Mandisa, Jason Castro’s mom, and Taylor Hicks tells his story about how Southwest Airlines was responsible for his attending his Idol audition. 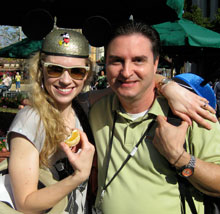 Now for a few pictures: Me with who may be the nicest person I have ever met Brooke White from Season 7, me with David Archuleta (sort of) also from season 7, 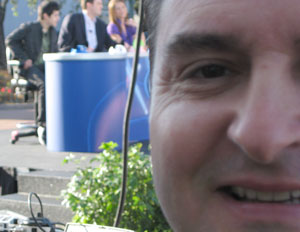 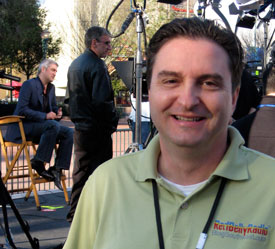 o the audition in Las Vegas that year.

It took several tries to get this picture. Mickey kept blinking!