The End of an Era for Southwest and the Airline Industry

blusk
Not applicable
An era has ended not only here at Southwest but in the airline industry as a whole.  The current paper timetable that was released on June 28 is our last.  Not only that, as far as we can tell, only Lufthansa will be left with a paper timetable.  In fact, most of the other carriers eliminated the printed system timetable a long time ago.  We held out as long as possible, but we found that very few Customers were using the booklets, and discontinuing their printing will save us money at a time when every penny counts. Another factor was that the books were growing into the size of small novels when we added additional existing connection opportunities for sale.  There is also an environmental benefit by saving paper and reducing trash.   Don’t worry, our schedules can still be accessed easily at southwest.com by clicking on “Travel Tools,” then “Flight Schedules,” or Customers can call our Customer Support and Services number at 1 800 I FLY SWA for flight information.  So let’s take a moment to reflect upon the alpha and omega of Southwest timetables.  The little one at the top is the front and back of our first timetable from June 1971. (I collected this on my first Southwest flight in July 1971.) At the same time, we also put out a more traditional paper schedule with flight numbers, but it is extremely rare. 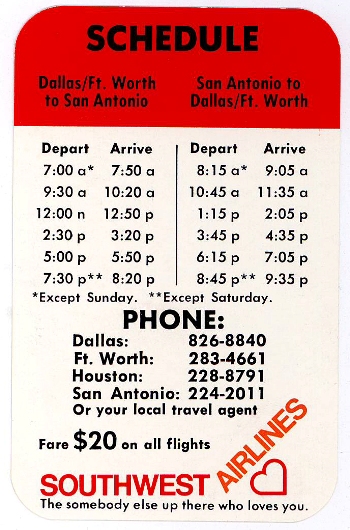 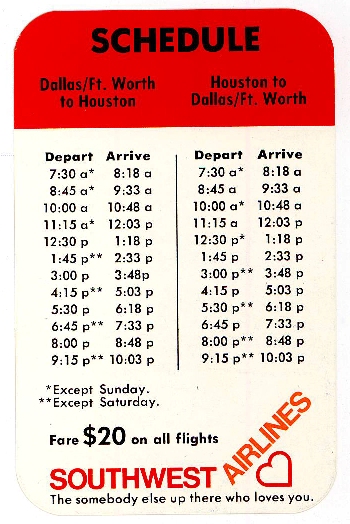 Contrast the first timetable with our last one.  For approximately the last ten years, our timetables have featured Employees from just about every area of the Company (that's Brian Bond below), and I have known a good number of these folks.

As I mentioned, this is really an industry-wide story, and the history of airline timetables is really the history of the airline industry.  Those of you who are regular readers know that I am a huge aviation buff, nerd, geek, etc.  Besides reading books and watching airplanes at the , collecting timetables was one of my first steps into the world of aviation, and I wanted to share with you some of those images to illustrate the rich history of schedules.  One of the oldest timetables I own, is from the eve of World War II and is the Jun-Aug 1941 Latin America timetable from Pan American.  The bold art deco cover reflects the ambitions of our first international carrier who besides the service throughout the Western Hemisphere, was also flying from the to and had just started service from to .

Even during the height of the war, airlines continued to serve domestic passengers and to print their timetables.  The stylized DC-3 of Transcontinental and Western Air (TWA) September 15, 1944 timetable proclaimed the shortest and fastest coast-to-coast service (which still took almost a full day).Until the advent of the jumbo, each airline strived to have the fastest and newest aircraft.

Just four years later, this TWA timetable brags about 300 mph Constellation service.  Sharp-eyed readers will also see that, with the addition of routes to , TWA has become Trans World Airlines.

The April 26, 1959 Continental timetable is the oldest one that I collected directly from an airline (well, actually my Dad who brought it home to me).  The ones above were purchased as an adult.  This was Continental’s last timetable before they joined the jet age that summer.

My collection spans the world and goes behind the old iron curtain.  For me it represents a repository of my dreams.  For the ones that were current when I obtained them, they represent the possibility of traveling to places I had never been, to fly on exotic airliners, or to return to a familiar and favorite location.  The older ones I purchased represent those great airlines and airliners of the past that will never be again.My boxes contain an honor roll of the industry.  Successful carriers like Southwest, Lufthansa, and share space with carriers like Lot, Aeroflot, and Infterflug (from ).  And there are the once-familiar names that exist no more like Western, Eastern, TWA, PanAm, Swissair, and Canadian Pacific.  But the timetables live on, representing a slice of 20th century achievement.
188 Loves
37 Comments