An odd thought ran through my mind the week before Christmas. Spending my second night in a hotel while the "BLIZZARD OF '09" dumped a couple of feet of snow on Baltimore and much of the Northeast, I began to realize, we have this all wrong. We need to have Christmas in summer like they do in Australia. That way our Christmas travel plans would never be interrupted by snow or ice storms. Perhaps we could all go to the beach and have a "barbie." (However, I am not sure I could wrap my brain around snowstorms in July...)


Having your travel plans interrupted by Mother Nature is no fun. (My vacation started the next day but I wasn't going anywhere.) But, given that we have no choice when massive storms blow our way, I made the best of it and took pictures. The sights in the terminal at Baltimore/Washington International were bizarre indeed for the week before Christmas: The place was deserted. When can you see a airline terminal in a major US city completely empty?


Here's the Bad News Board. Even the flights that were still listed didn't make it in. Better to keep those planes out in the system moving other people. Getting them needlessly frozen to the ground only inconveniences more people. I can't remember having seen this many cancellations for a long time.

The main ticket counter out front. About five Passengers and ten Employees. Hard to believe it's the week before Christmas.

A peek outside shows why. The storm has just begun to bear down on the airport. Major highways are passable but will be closed by midnight.

Inside the Main Terminal there is one passenger, on his laptop. Cleaning staff vacuum around him.

The food court, usually a bustling place, serves only a few Employees who have taken a break from snow removal operations on the ramp. 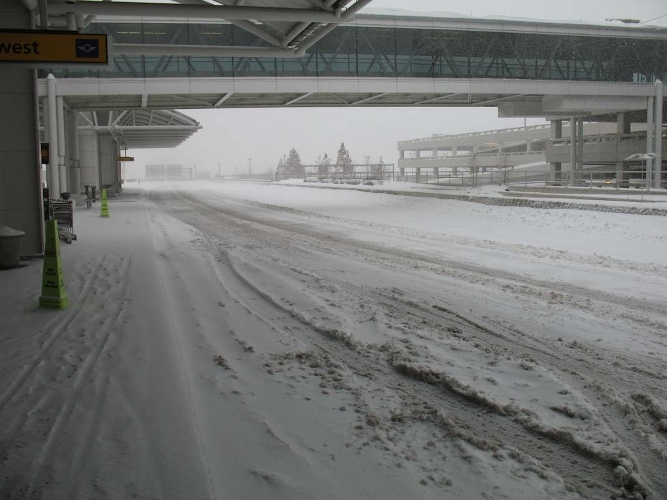 Me, getting off the hotel van for my second night at the Holiday Inn. Notice the SUV behind me.

Here's the same SUV the next morning.

This was a shot of the gates mid-blizzard. Crews are trying valiantly to keep the jetbridge areas as clear as possible.

Only 12 hours later, the same area after the storm passed. The ramp had been cleared of most of the snow though, it was still ice covered.