Forget Will Smith, Tom Cruise, Miley Cyrus, or whoever else Barbara Walters selected as "The Ten Most Fascinating People of 2008." My personal pick would have to be Ms. Mary Creason, a Senior Customer Relations Telephone Rep here at SWA Headquarters in Dallas.

Mary is one of those people in the midst of what people are calling their "second career." It's a unique life event reserved for women who have gotten married, raised children, and re-entered the workforce. As for Empty Nesters Syndrome? Fuhgeddaboutit! And it turns out she's in good company. A study done by MetLife Foundation and Civic Ventures, a think tank on baby boomers and their work habits, indicated that many people wish to use their "encore career" not just for income purposes, but to make a positive difference in the world. She's for sure made a positive difference here at Southwest. As for Mary's first career, well, it was a bit of a whirlwind...

Mary began working for Braniff Airlines in 1959 at the tender age of 19--against her father's wishes, who warned her Flight Attendants were just "glorified waitresses." She left her hometown of Wichita, Kansas, to fly to Dallas--it was her first time on an airplane, but it certainly wouldn't be her last. Braniff had moved into the newly completed Dallas Love Field Terminal just two years prior--in October 1957.

The competition to be a Braniff Hostess (other airlines still used the term Stewardess) was fierce. Women were subject to the strictest of standards: one had to be 18-32, unmarried, and weigh between 110-132 pounds. All this while looking elegant, keeping your hat pinned, and serving drinks to 30-odd passengers--completely alone. Yes, it was one hostess per plane back then, if you can imagine that. Although I'm guilty of glamorizing the golden days of aviation, it was hard work being dressed to the nines and working in an unpressurized cabin with no air conditioning. Until WWII, all attendants had to be registered nurses as well. Hostesses also had to purchase their first uniform, which often cost more than a month's salary.

The chances of becoming a Braniff Hostess were one out of 400 back then--and Mary was one of them. When she describes receiving her letter of acceptance in the mail, a wave of emotion washes over her, and her voice falters as she struggles to convey her excitement on that momentous day.

Mary worked on reserve out of Kansas City, and had to ask permission from the Flight Handler before even leaving the house to mail a letter. One never knew when they could be called in for a flight. There were frequent layovers in Omaha that could last from 24 to 36 hours. But one such flight to Omaha carried a very special passenger: the one and only Ms. Joan Crawford, whose husband at the time (the CEO of Pepsi-Cola) had just passed. Ms. Crawford was flying to Omaha to dedicate a Pepsi plant in her late husband's honor. Mary remembers her wearing "a green dress, ankle-strap shoes, red hair--and just covered with freckles. She brought an entourage of seven people with her, and a cooler full of drinks, since we didn't offer them on board yet."

Mary was a Hostess from 1959 to 1961 before getting married and moving to Reservations. She stayed at Braniff on and off until the airline collapsed in 1982--taking two-thirds of her retirement. Through acquaintances, Mary was offered a job at Southwest in 1996. Even though it was a pay cut, she made the move.

"Like Braniff, Southwest is very family-oriented. I've made a lot of lifelong friends." Now on her "third career," Mary has a sassiness and bravado that puts even me to shame. Two of her Braniff uniforms are now hanging in the halls at Southwest--a summer blue suit (once worn with blue-and-white spectators!), and a gray wool for winter. And as much as I'd love to try one on, there is no way I could squeeze into a 1950's size 8--comparable to a size 2 of today.

Mary is a well-known figure throughout the Southwest halls, but when you dress as "The Pantless Pilot" on Halloween, how could you not be? If you're really lucky, you just might hear Mary on the end of the line if you call Southwest Customer Relations. As a Senior Telephone Rep, she can spend up to eight hours talking each day to our Customers about concerns or complaints (luckily, we have pretty few!) Our interviewer for the video, Mr. Kim Seale, is of the privileged few who gets to work with Mary every day in Customer Relations/Rapid Rewards. We have him to thank for bringing her amazing life story to our attention. 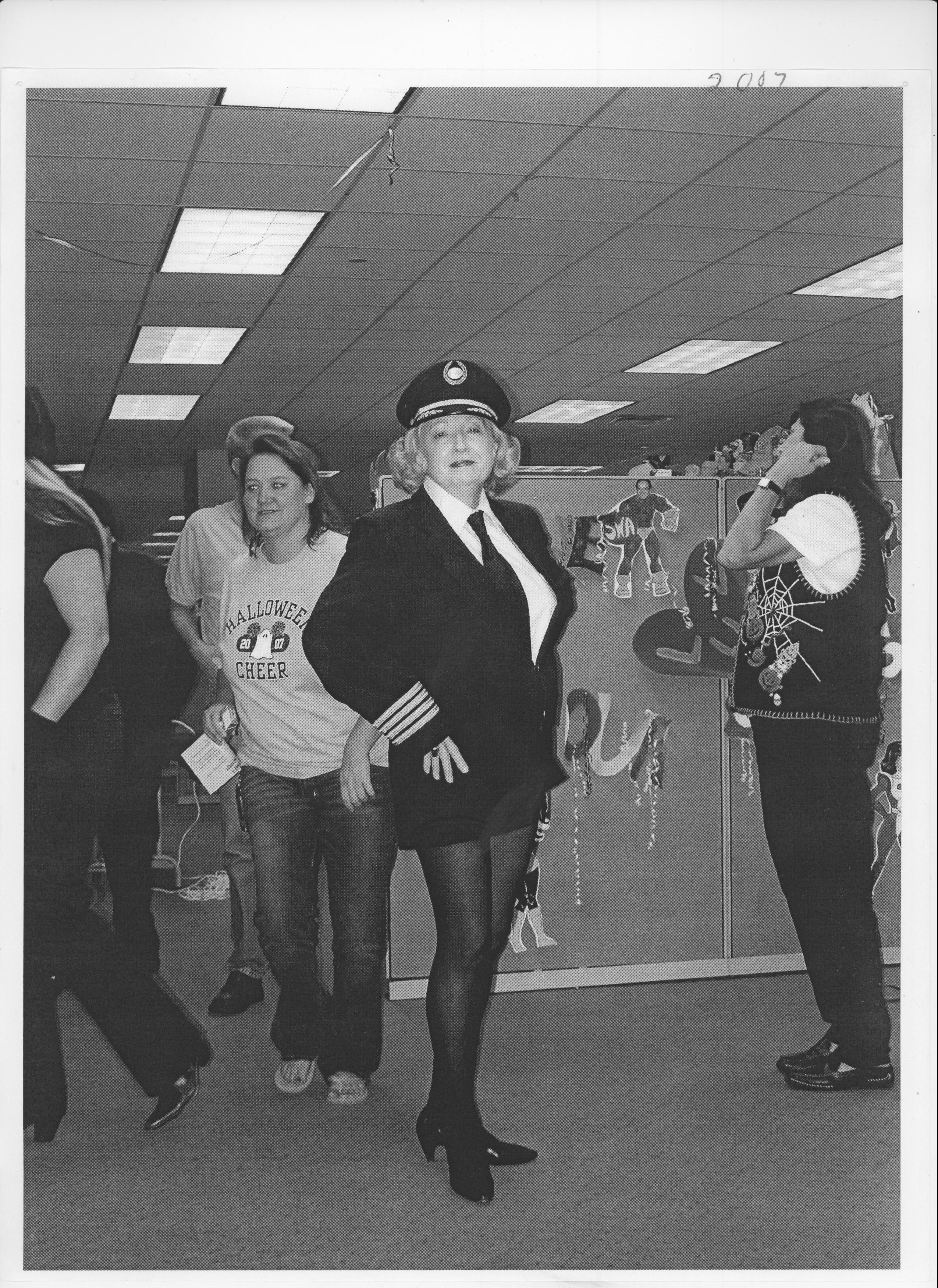 And if you're ever in Dallas, do visit the Dallas Historical Society. The Clipped B's is a organization of former Braniff Hostesses, and they've donated many of their elegant uniforms to the museum. The name 'Clipped B's' comes from the two Braniff pins Hostesses were given at the start of their career. When you left the airline, you had to give one pin back--but the other "B" was yours to keep.

We're so lucky to have Mary and her aviation history as part of the Southwest Family, and we hope she'll stay on for a "fourth career!"

cadams
Adventurer C
Lindsey, what a great story! I wish we had Mary on the Inflight side - I'd love to work with her. And thank you to Kim Seale - another great job fit for SWA!
11 Loves
kim-seale
Active Member
Yay! What an awesome tribute to an awesome lady!! I am indeed VERY fortunate to be able to work with Mary, and have been so blessed to be able to count her among the many new friends I've made at SWA. Mary has had such an incredibly interesting life with so many fascinating stories to share. After you read the above story, I hope you will jump over to the related section of our video blog and watch the great production done by Caleb and Terry Riley, a very creative videographer who helped us on this project. What you don't realize about that five-minute video is that it was edited down from an hour's worth of interview! Mary had such a rich collection of memories, but unfortunately, we couldn't include everything. Caleb and Terry did a masterful job of presenting the "best of" the stories Mary told us. Kudos also go to Lindsey for all of her work on this project, including the wonderful write-up above. Lindsey is even newer to the Company than I am, but she has hit the ground running by contributing some terrific Blog threads in a short time. Of course, it isn't surprising that she's doing so well; she's a fellow Longhorn who may be a part of the Canyon Blue Family now, but her blood runs burnt-orange like it does for the rest of us UT graduates! But, none of this would have been possible without the treasure that we have here in Customer Relations. Mary lights up this department, and her joy for life is truly infectious. Thanks for sharing your story with us, Mary -- we LUV you! Kim CRBB 🙂
11 Loves
Tom_H1
Explorer C
Hi Mary, I read your story with a little bit of heartbreak regarding your father's comment that flight attendants are "glorified waitresses". As a 35 year old man, the only thing I ever truly wanted to be was a F/A. I am embarrased to admit this, but as a teenager I used to practice (by myself) making inflight annoucements and the look of pride on my face when I would get there. I remember my mother yelling at me that I am "wasting my life" wanting to be a F/A. I went on to a career with various airlines on the grounds ops side, but was a heavy heart that I never got to wear the wings and fly....It just never happened for me. God bless you.... wonderful life that I wished I lived.. As I sit at a desk, in my faceless cubicle working in insurance...... I can still dream...... Tom
13 Loves
Leah3
Adventurer B
Oh, Tom, I'm sorry! I, too wanted to be a flight attendant for a long time! Even when I was in college (& I really am glad I received the degrees I did), I still thought that's what I wanted to do. Even though I interviewed 8 times for 3 positions (one being FA) with Southwest, I was never selected for training after my one-on-one interviews. Yes, I was crushed & definitely cried! It stil makes me sad sometimes. I am going back to college again this Fall because I want to go into the mental health field, which is another big, long time interest of mine. Believe me, if I could work as an FA, a CSA, & an RSA with Southwest, as well as in the mental health field, I would do it! I have some friends where I live who work for SWA. I LUV them a lot!! :) I'm glad you did get to work for various airlines. I like to use my imagination & pretend I'm an FA with Southwest; for example, after church, I like to pretend my church bulletin (which is trifold) is the safety demo card! I also like to pretend I'm a CSA! I wish you wouldn't give up! Go ahead & send in your resumé again! I bet you'd get on! God bless! I flew Branniff in sixth grade to STL & back, but that's the only time I flew that airline. SWA LUV!
12 Loves

lreynolds
Frequent Flyer A
Mary was an absolute delight to write about! And thanks so much to Kim for helping us out with the interview. I'm on the lookout now for a Braniff Airlines 1960s hostess uniform to add to my vintage collection...
11 Loves