The day started very early on February 3, 1986, as I anxiously boarded Southwest’s first flight out of San Antonio headed to Dallas.  It was the first day of my new job as Executive Assistant to Ron Ricks and Jim Parker, who were also on the plane (thankfully, headquarters was located at the end of the terminal, so it just meant a long walk each morning and evening during our six-month commute).  We eagerly made our way to Gary Barron’s office, only to find out that not one thing had been done to prepare for us – we had no offices, no phones, no typewriter (yes, I said typewriter) – nothing!  However, by end of day, space was found in Ground Ops next to Jim Wimberly, Julie Dowlearn, and Bob McNeil – so the journey began from life in San Antonio at Oppenheimer, Rosenberg, Kelleher & Wheatley, to Southwest Airlines.

Months later, offices were built for us right across from Howdy’s, and the General Counsel Department was officially formed (which, at the time, included Properties, Facilities, and Technical Services).  Mind you, this was coveted real estate, because Howdy’s was the most convenient place for lunch (you could run a tab), and the closest beer or wine at 5:00.  It was a joint, plain and simple, but they made a mean burrito, and provided a welcome spot for all to gather. 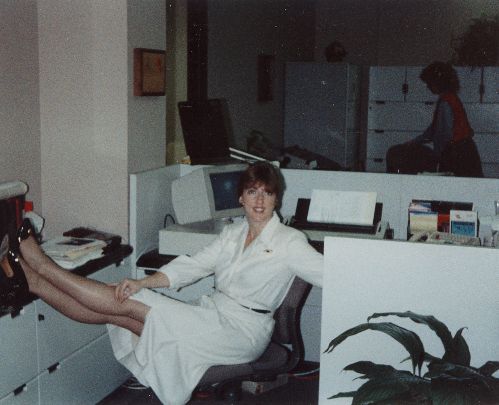 Two very distinct memories come to mind from 1986.  We bought Southwest’s first word processing computer (Colleen was still using her Wang, which you could not pry out of her hands), and “Jams” on summer Fridays.  Jams, of course, were the original Fun Wear.  They were not flattering at all (I don’t care how good you thought you looked), but hey, it beat wearing dresses and suits, so we were all in (well, most of us).

My Southwest career path has changed over the years.  I have been in our Facilities Maintenance group now since 2007, where I serve as Programs Manager.  For the past several years, it has been my pleasure to develop the groundwork for Southwest’s more robust Onboard Recycling Program, and I proudly participate on the Green Team.  Watching our environmental efforts grow and become more successful has been extremely rewarding.

Twenty-five years have gone by like the blink of an eye.  The sad moments are far outweighed by the heartwarming memories and countless blessings.  The greatest of which came in 1991 when I traded in my “marry me, fly free” keychain (given to me by Jim and Ron), and married my SWA husband, Bron Milczewski.  If memory serves, we are LUV couple #499.  Some day we’ll retire to our home in the mountains, but for now, we’re still having FUN!!