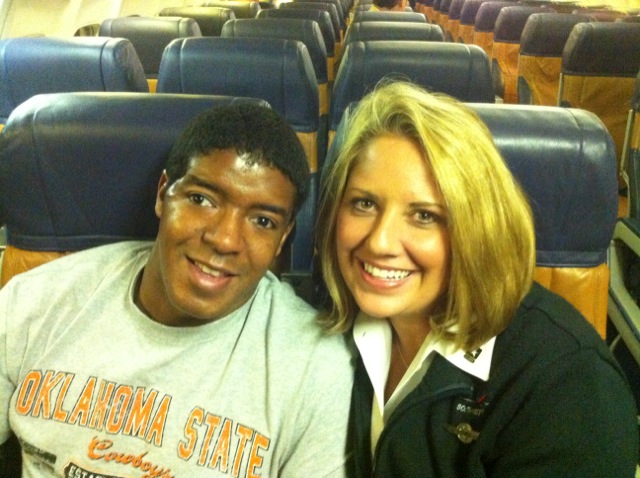 cwelch
Not applicable
Thank you for sharing this story with us, Haley. More importantly, thank you for showing such love to our Customers. I'm moved.
8 Loves

Kevin_Scott
Not applicable
Haley, that was an awesome story! You just showed a lot of people what I've known for many years now. That is what a compassionate and genuinely amazing person you are! I've known you since we were in 7th grade, and you continue to amaze me by what a special person you are! I feel very blessed to call you my friend! Fly safe!
11 Loves

Gayle1
Not applicable
SW airlines has fair prices, no extra fees, and very professional employees. I wish they had flights everywhere I want to go! Keep expanding your flight bases. We were so touched by SW honoring veterans in a special way for their sacrifices.
11 Loves

John_Smalling
Not applicable
Hey Halie! What a beautiful, touching story. Thanks for taking the time to make a difference in that young man's life just as he made a difference in yours. Your heart is, and always has been, BIG. (well, maybe not for awhile in high school!!!! 🙂 Just kidding. Our servicemen truly are our heroes and give the ultimate sacrifice so that we can keep on living this life we've become so accustomed to. Sometimes it takes something like this to wake us up and count our blessings.....it happens when we least expect it, but sometimes when we need it the most. God has slapped me upside the head a many times in my life and continues to do so. 🙂 Thanks for sharing story and for honoring this young man and of course, our hero, Adam, as well. You are a special young lady.....and your parents ain't too bad either. 🙂 Now, your brother and sister.....well......:-) Keep flying safe and keep making a difference in the lives of others. God Bless, John Smalling
9 Loves

w5pda
Active Member
Even though I've never had the honor and pleasure of working for SWA, it's because of moments like these that I'll never hesitate to consider the any of the loving and caring souls of this wonderful company as part of my family. From your "brother" in CRP, Paul
7 Loves