Antlers Up to a Remarkable Rangers Season 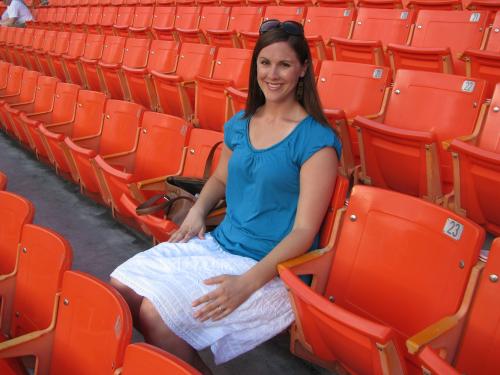 As the saying goes "there’s no crying in baseball". So while, admittedly, I’m a bit bummed that the World Series is over, I’m trying to focus on the positive. My beloved Texas Rangers made it to the big show for the first time in franchise history and I got to be there in person to witness their big win in Game 3! You’ve been able to feel the excitement in the air throughout the entire month of October in the Dallas-Fort Worth area, and hosting the Fall Classic for the first time in history was the icing on the cake!

Hailing from Austin, I never had a true home team to root for when it came to Major League Baseball. But for some reason, from day one, my family gravitated toward the Rangers. Even after marrying a born and bred Houstonian (read: Astros fan), my loyalty remained strong. Ruben Sierra, Julio Franco, Steve Buechele, and of course, the often imitated (never duplicated) Nolan Ryan….those were my boys!

Not just a Rangers fan, but a die-hard baseball fan in general, my husband and I set out on a quest to visit each and every Major League ballpark the second I got hired at Southwest. We couldn’t think of a better way to put our newly acquired flight benefits to work! I have to admit that I got a bit of a head start….my family started visiting ballparks back when I was in junior high, so my better half had a bit of catching up to do. But we were determined. Between 2005 and 2010, we managed to catch games at all 30 Major League ballparks! And whenever a new stadium opens, you can bet we’re on the first flight out! Here are a few fan favorites:

But even after criss-crossing the country taking in games in some of the most iconic parks around, nothing compares to what we experienced during this year’s Rangers playoffs run. To see the entire "claw & antlers" nation come together in a sea of blue and red to support this year’s star team on the Dallas sports scene was simply incredible. And the fact that Southwest has been a partner of the Rangers (and currently the official airline) for 13 years made the experience even more special.

So I’d like to tip my cap to the entire Rangers organization in celebration of a season that was destined for the history books. From winning the AL West to paving the way for the first-ever World Series held in North Texas, they’ve given us fans memories that will last a lifetime. Here’s to an off-season full of rest, relaxation, and successful contract re-negotiation (oops, did I just say that?!?!). Anxiously waiting to hear the words "Play Ball" on Opening Day 2011!

blusk
Not applicable
Erin, It's less than four months before pitchers and catchers report to spring training. It was rare air indeed having the Rangers play baseball in November! Oh, I am more than a little bit jealous of your and your husband's quest. I'd love to do that, but at least I have seen games in stadiums that are no more or that aren't being used for baseball--Atlanta Fulton County Stadium, Candlestick Park, San Diego's Jack Murphy Stadium, and of course Arlington Stadium. And although I didn't get to see a game in them, I did see these former stadiums in person that were home to MLB Teams, the Kingdome (Mariners) and Sicks Stadium (Seattle Pilots) in Seattle, Three Rivers in Pittsburgh, Shea and the old Yankee Stadium in New York, County Stadium (Braves and Brewers) in Milwaukee, Riverfront in Cincinatti, RFK (Senators and Nationals) in DC, The Coliseum (Dodgers) and Wrigley Field (Angels) in LA--yes LA had a Wrigley Field too, the Astrodome and Colt .45s stadium in Houston, and the middle Busch Stadium in St. Louis. With baseball, your current enjoyment will be tomorrow's memories.
159 Loves

Mike_Barnbaum
Not applicable
Erin, Reading your blog through and through made my decision here that I have to comment. I would encourage you as well as Brian, who also commented to get out in the 2011 season to see some other great ballparks. Baseball and Southwest Airlines go well together, just ask me, and perhaps Brian too. My home ballpark is Raley Field, located in West Sacramento, next to Historic Old Sacramento. The YoloBus Route 42B is an easy bus ride from Sacramento International Airport to Raley Field. If you attend beginning on Thursday 07 April 2011, you will be enjoying Sacramento RiverCats Baseball. The Sacramento RiverCats play in the Pacific Cost League and are the Triple-A Affiliate of the Oakland Athletics. One team we will be playing is the Round Rock Express, which is, beginning in 2011, the Triple-A Affiliate of the Texas Rangers. One or two years ago Round Rock, then the Triple-A Affiliate of the Houston Astros, was purchased by Major League Baseball's Strikeout King, Nolan Ryan. Once Nolan Ryan purchased the Texas Rangers, earlier this year, a formal process was done in September when the Player Development Contract was up for both Round Rock and Oklahoma City in which case a flip of the switch was done to make Round Rock in line with Nolan Ryan ownership and therefore Round Rock will now become the Rangers Triple-A Affiliate while the Oklahoma City Redhawks will become the Triple-A Affiliate of the Houston Astros. Should you wish to come out to Raley Field in West Sacramento in the 2011 Pacific Coast League Season, the Round Rock Express will play the Sacramento RiverCats at Raley Field between August 12th and August 15th. The days of the week of this four-game series will fall on Friday and end on Monday. While Summers in Sacramento can get downright hot, we do have two great things that you and your husban will greatly enjoy. 1) Sacramento is a dry heat and 2) We do get the Delta Breeze, so on some days when it should be One Hundred or hotter, it might only get to Eighty-Five or Ninety. To my point about the Pacific Coast League and Southwest Airlines going well together. There are sixteen teams in the Pacific Coast League. At least ten teams for now have immediate access to their ballparks through Southwest Airlines. Oh no, don't think that the Major League Ballparks are your only Avenue into Baseball. Perhaps you can catch a game in 2011 where the home team, in Alphabetical Order by City Name, could be the Albuquerque Isotopes, Las Vegas Fifty-Ones, Nashville Sounds, New Orleans Zephyrs, Oklahoma City RedHawks, Omaha Royals, Reno Aces, Sacramento RiverCats, Salt Lake Bees, or the Tacoma Rainiers. Once the D.O.J. does their formal approval of the merger of AirTran becoming Southwest Airlines, I believe that Memphis will then become a Southwest City in which you not only will be able to visit the Elvis Mansion in Graceland, but you will also be able to use Southwest Airlines to visit AutoZone Park to catch a game of the Memphis RedBirds. So you see, by example, that Southwest Airlines is a great way to get in on the action of the Pacific Coast League. If you need more information of the Pacific Coast League please visit http://www.milb.com/ on the Internet or call the Pacific Coast League Offices directly at (719) 636-3399 for your access to a wide variety of information on Triple-A Pacific Coast League Baseball. If I could be of any additional help here, please feel free to retrieve my contact information directly from Brian Lusk, who has, numerous times in the past, contacted me and mailed me Southwest Information. Oh yes, and it was Brian who was the only other person, before me, that provided the historical comment on this particular story in the Southwest Blog. Sincerely, Mike Barnbaum, Southwest Airlines Rapid Rewards Member in Sacramento, California, and Partial Season Ticket Holder, Sacramento RiverCats Baseball, Oakland A's AAA Affiliate Si
153 Loves