Occasionally, I run across one of Brian’s previous Flashback posts that I consider to be a “true gem.”  Last week, when I was doing some research for the Wayback Moment, I came across this post and felt that it simply needed to see the light of day one more time.

Since this post was originally published on June 18, 2010 and focuses on the days surrounding our first day of service, it could just as easily have served as last week’s installment of Flashback Fridays.  However, I didn’t discover it until late into our birthday week, and by then, another time-appropriate Flashback post had been written.  So, although we won’t be posting these reruns on any kind of regular schedule, we will certainly be on the lookout for those very special Brian Lusk treasures that we know are here.  Kind of like watching your absolute favorite movie for the umpteenth time—some things just bear repeating.

Ever since I became involved with our corporate archives, I have been facing a huge conundrum.  Southwest has never been accused of being shy, especially when it comes to good news.  Given that longheld corporate trait and the fact that this is being published on June 18, which is our 39th Anniversary, where are the publicity materials for our first flight?  We do have images of our first inflight drink menu, but that’s about it.

The picture below is one of the earliest I have found, and it shows one of our first three 737s pulling into the North Concourse at Love Field.  Southwest’s first three aircraft were the only ones to carry the full titles “Southwest Airlines” on the tail, and starting with the delivery of the fourth aircraft in early 1972, the “Airlines” was dropped.  Considering the lengthy legal battle we had to fight just to get in the air, you would have thought that our first flight would have been a huge occasion.  I think I have been through every photo in our files, and I have walked every inch of our Headquarters building whose walls are a scrapbook of our history, and I have never seen a photo of that first flight.  I was left with no banners, no balloons, and no bands playing.  About the only thing we could pinpoint for sure were the two Pilots on our inaugural flight, Captain Emilio Salazar and First Officer Bob Pratt.  So, what happened? 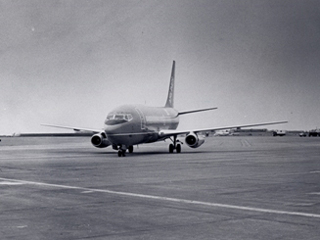 I didn’t really know the answer until just a few days ago.  I was preparing our PulsePoint survey that runs on our internal web site.  The question was about our first flight and its routing on June 18, 1971.  Popular theory among us relative newcomers is that we inaugurated operations with the first departure from Dallas to Houston Intercontinental, which left at 7:30 am.  The legend has it that the reason our early morning flight to Houston is Flight #1 is because that was our first flight.  I wanted to see if I could confirm this piece of our folk history, and I checked with the keepers of our Corporate Records in the Executive Office.  We found a scrapbook of press clippings from 1971, and therein lay the answer to not only the first flight question but to the whole first flight hoopla (or lack thereof). 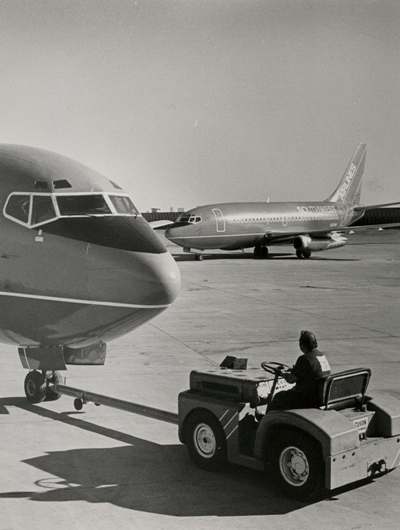 (The photo above is also an early photo taken at our original hangar on the north side of Love Field.  The location is confirmed by the blast fence behind the tails.)  The book has  pages of newspaper clippings from June 17 and 18 reporting on the last-ditch legal battles to keep us on the ground.  As I am flipping pages, I am thinking the clippings from June 19 will have reports about the first flight festivities, and I am getting excited—at last the answers.  But wait, the only thing for June 19 is a lengthy Fort Worth Star-Telegram report about our Flight Attendants passing evacuation training.  Then at the very bottom of the article, all is finally revealed.  It mentions that Southwest began operations the previous day with the first flight to San Antonio—not Houston.  (This would have been the 7 a.m. departure)  The article goes on to specifically mention that there was no ceremony, except that Dallas Mayor Pro Tem Ted Holland showed up to shake the hands of the Crew Members.

Since that time, I was fortunate to ask Cofounder and Chairman Emeritus Herb Kelleher about the confusion about the identity of  the first flight.  Our then President, Lamar Muse, felt that Dallas/Houston was a bigger market, and all the off-duty Employees and folks from The Bloom Agency who handled our advertising back then rode the 7:30 flight from Dallas to Houston Intercontinental.  Herb told me: "I guess we actually had two first flights, but the San Antonio flight really was the first."

My poll question brought forth some comments from Captain Salazar's daughter, Loretta, who is also a Southwest Employee.  Loretta has been kind enough to share some of Captain Salazar's records with us, and among those papers are several handwritten pages that outline his flights for the first couple of months.  Next to each date is a circled number, either 20, 21, or 22.  It dawned on me, that these are the ship numbers for the flights he flew each day.  The Pilots stayed with the aircraft for their entire work day.  There on the line for June 18 is 21, which would mean he flew N21SW all day.  In turn, because he flew our first flight, N21SW would have flown our first flight.

So why was Southwest “soft launched” to use a current buzzword?  My own theory is that there was concern that the legal issues hadn’t been put to bed yet.  Lamar asked Herb, who had just spent 48 hours without sleep working on last minute legal hurdles what he should do if the Sherriff showed up with a restraining order, and Herb told Lamar to "push the flight out on top of him and to leave tire tracks on his shirt."  Herb confirms the story, and  he adds, "After four years of fighting this, I was mad."  My own thought was that we didn’t want to publicize the exact time of the first flight, with the possibility of a confrontation.  Another more practical consideration, and which, it turns out is the real reason according to Herb,  is that with the start of operations, everyone had jobs to do and our folks had no time to devote to preflight ceremonies. If it is any consolation, there was a big kick-off party the previous night, so our birth did have some recognition.

When I shared this info with a Coworker, he replied that he would have given anything to see that first flight leave.  And I agree that would have been remarkable.  However, the most remarkable thing is that the tiny group of young dreamers and industry retreads who took to the sky on that early summer day 39 years ago were able to persevere through so many critical challenges to build the Company we have today.  Happy Birthday, Southwest Airlines.