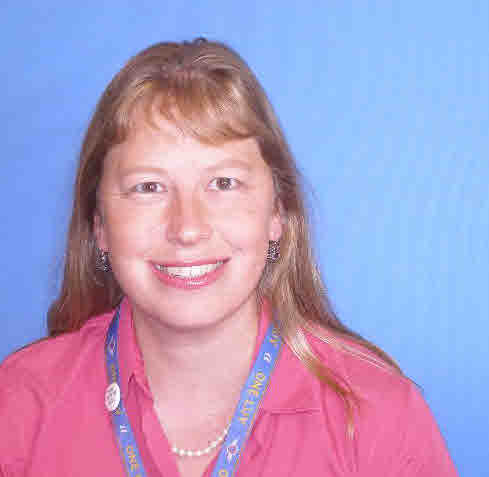 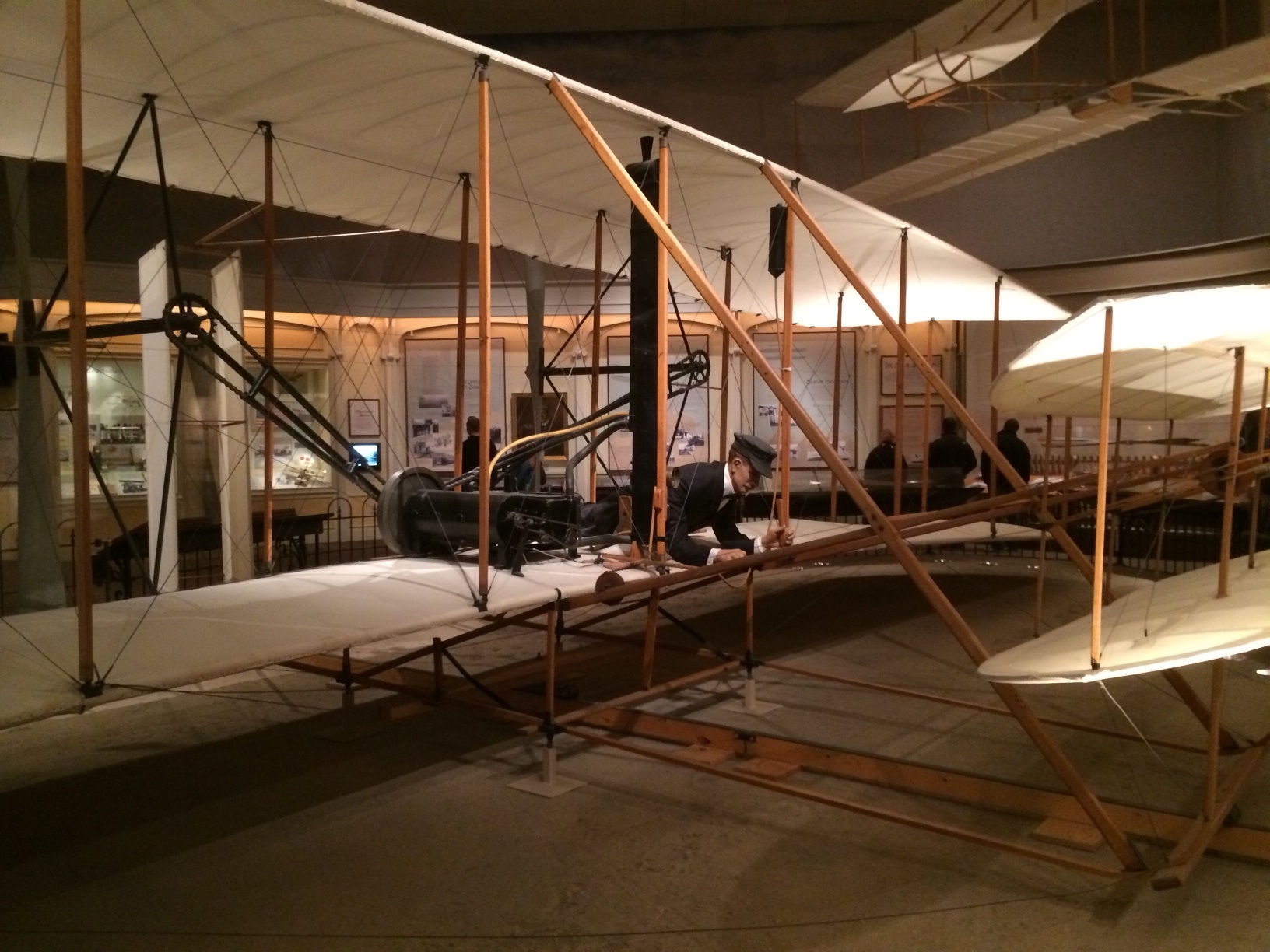 Imagine a time before flight.  Now imagine standing where flight began.  Or walking the distance of the first flight—all 120 feet.  That’s where I found myself in August when I visited the Outer Banks of North Carolina, where flight began on December 17, 1903. 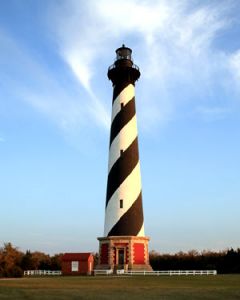 Cape Hatteras Lighthouse
I made it a special point to visit this area since this year marks the 110th anniversary of Orville and Wilbur Wright’s famous flight (Also my birthday, but I won’t be 110!).  You can fly into ORF or RDU on Southwest and drive out to this beautiful coastal area.  There are a variety of places to stay, from hotels to lavish beach houses.  Once there, you can play in the surf, collect shells, and visit lighthouses—including the famous Cape Hatteras lighthouse.  Delicious food is plentiful.  You can buy fresh seafood to prepare yourself or just eat at one of the many great restaurants.  My favorite is Basnight’s Lone Cedar Café in Nags Head, N.C. During the summer, stop by the Waterside Theatre in Manteo, N.C. You can catch a performance of the outdoor drama, The Lost Colony.  The play tells the story of one of the first European settlements—the Roanoke Colony—and of the colonists’ mysterious disappearance.  Also, don't miss the Monument to a Century of Flight, a hidden treasure at the welcome center in Kitty Hawk. But, in my opinion, the most important thing to see is the Wright Brothers Memorial, located in Kill Devil Hills, N.C. While at the Wright Brothers Memorial, think about this: At the time the Wright Brothers flew, there were many people trying to figure out how to fly—and not just in the United States.  The Wright Brothers documented their flight by having someone take the picture shown here, so they are credited with discovering flight. Wilbur had thought about flight for some time.  He and Orville ran a bicycle shop in Dayton, Ohio.  The maintenance and assembly of bicycles must have been helpful skills.  The Brothers conducted wind experiments and made one of the first wind tunnels.  They discovered a way to control an aircraft using all three axis of flight still known today as Pitch, Roll, and Yaw. The Wrights went to North Carolina in 1900.  They wanted to try out their full-size glider (They would use gliders until 1903.).  Now, I know that even today there is a feud about the birthplace of aviation.  It seems to me, on one hand, if the brothers could have just stayed at their home in Dayton, then surely that would have been easier… but on the other hand, they hadn’t traveled much, and I like the idea that they had to set out somewhere to fly.  To me, Ohio is the birthplace of Aviators and North Carolina is the birthplace of aviation.  (Also, it’s just a weird coincidence that the Wright Amendment has the same name.) But, why North Carolina?  Well, realizing specific wind conditions would be needed, as well as no trees—naturally!—and sand to land in, Wilbur wrote to the U.S. Weather Bureau and got wind information for the entire country.  Kitty Hawk, N.C. ranked 6th in wind intensity. He also got a letter from the former Postmaster of Kitty Hawk who told Wilbur of the land and living conditions.  He said, “I assure you, you will find a hospitable people when you come among us.”  This is true today, I might add. It’s possible Wilbur traveled alone on his first visit to North Carolina.  He went by train to Virginia and then reached Norfolk, Va., on a steamer.  He mentioned the temperature was 100 degrees!  He traveled to Elizabeth City, N.C., and waited a few days for a boat to Kitty Hawk.   No one seemed to know anything about Kitty Hawk or how to get there.  The city, along with all of the Outer Banks, was quite remote at the time.  The brothers set up living quarters and what I call “The First Hangar” for their aircraft in Kill Devil Hills.  (Southwest has a plane named Spirit of Kitty Hawk.  I am still waiting for a Spirit of Kill Devil Hills plane!). The Outer Banks was justifiably known as the “Graveyard of the Atlantic.”  Ships were wrecked on the shoals due to the strong and shifting winds driving the ships to shallow water, where they frequently ran aground.  “Life-Saving Stations” were formed to try to rescue those onboard.  Wilbur and Orville would get to know the men at the Life-Saving Station and would raise a signal (something like a flag) to show when they would be attempting flights, and the available men would come over to help—generally positioning the aircraft.  The brothers were an interesting sight for local people.  They dressed impeccably and worked six-days a week on their strange experiment.  It is easy to see why their helpers were curious about what the contraption would do! The brothers returned each year, staying (and sometimes rebuilding due to storm damage) in their same shelter.  Wilbur once commented on the sand, “The sand!  It gets into everything and soon will be the only thing!”  Their living conditions were challenging at best. The Wright Brothers started working on a motor for their aircraft in December 1902.  They built another wind tunnel at the beginning of 1903 for more accurate measurements and began experimenting on their motor.  After the motor cracked, they decided to use an aluminum casting. In October 1903, and the Wright Brothers arrived again at Kill Devil Hills, preparing thier machine for flight.  But it didn’t happen immediately.  The first attempt to fly took place on December 14, and it was unsuccessful. 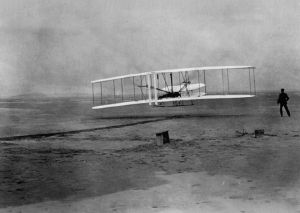 The Wright Brothers First Flight in 1903. Photo courtesy of nps.gov
On December 17,  the Wright’s signaled the men at the Life-Saving Station that they would be attempting to fly.  The wind conditions were good.  Wilbur had attempted to fly on December 14, so Orville got to go first (I don’t know if there had been a coin toss a while back, but in Orville Wright’s letters, he mentions Wilbur flying on the 14th and “… the right to the first trial belonged to me.”).  The brothers had a man from the Life-Saving Station—John T. Daniels—take the picture.  Legend is that this was the first picture he ever took! As you can see, he took a great photo!  That first flight lasted 12 seconds and went 120 feet.  There would be four flights in total that day – the last fight lasted 59 seconds and went 852 feet.  A gust of wind after the last flight damaged the machine.  A telegraph was sent from Kitty Hawk with this news. Sadly, Wilbur died nine years later, in 1912, fromtyphoid fever.  From what I have read, Orville spent much of his remaining life defending the patent the brothers had on this flying machine.  He died in 1948 from a heart attack. I think the Wright brothers would have been amazed to see that we reached the moon just 66 years after the first flight!  And 68 years after this picture was taken, the first Southwest Airline flights took off from DAL! In addition to the Memorial, recreations of their dwelling and markers showing how far each flight went on the 17th exist in Kill Devil Hills.  There also is an airstrip there called FFA—First Flight Airstrip! Why is this history important to know?  Well, while neither brother would be as outgoing as our Founder, Herb, like him they took an idea, and with help from a number of people, they realized a dream.  Actually, it was the same dream that we still have today at Southwest:  to give People the Freedom to Fly! 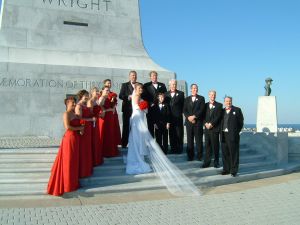 Sharing my birthday with the anniversary of flight and being a Flight Attendant married to a Pilot (who flies for Virgin America). What better spot to get married?!
2 Loves