“Always give back—find a way to help others” are the simple yet powerful words that Denver Nuggets Coach George Karl has always remembered since first hearing them from his former University of North Carolina Basketball Coach Dean Smith in the early ‘70s.  Yes, Coach Karl has 1,036 wins and 75 career playoff series under his belt, but just as important as these wins are the “give back” wins to the numerous organizations close to his heart.

One of the organizations that Coach Karl has supported for the past ten years is the University of Wisconsin-Milwaukee, School of Continuing Education, College for Kids program.  Just over 30 years ago, College for Kids (CFK) was created to not only occupy summers off for children, but to offer programs that encourage high academic potential, motivation, and talent.  Engaging students at an early age and promoting advanced education in college, this fantastic program offers more than 150 courses in five different program areas, reaching children of all income brackets and educational backgrounds serving over 2,000 students annually. 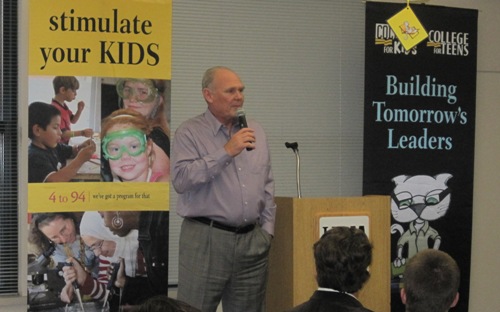 In planning to not only celebrate 30 years, but also raise additional funds to send more economically challenged youth through their program, the College For Kids Team announced their first ever “game plan” for a fundraising event they coined, “Celebrating 30 Years of Successful Kids.”  It didn’t take them long to secure their MVP and event hosts for the evening: Coach Karl and his girlfriend, Kim Van Deraa.  Both have continued to be big supporters of CFK even since Karl moved to Denver in 2005.  In addition to committing their time to host the event, they also donated some pretty cool once-in-a-lifetime experience items for attendees to bid on—The Ultimate NBA Experience provided the opportunity to travel with the Denver Nuggets (on the team’s private plane) to a game, a motivational speech with Karl, golf with Karl, and a Qdoba Backyard Blast party with Karl.  I must say that was a great example of “giving back”!

It was during the second period of the event that the fans of College for Kids had the opportunity to hear remarks from College For Kids SMILE (Sponsorship Money Investing in Lifelong Education) Scholarship Recipient Awmorreunce “Mo” Broadway. 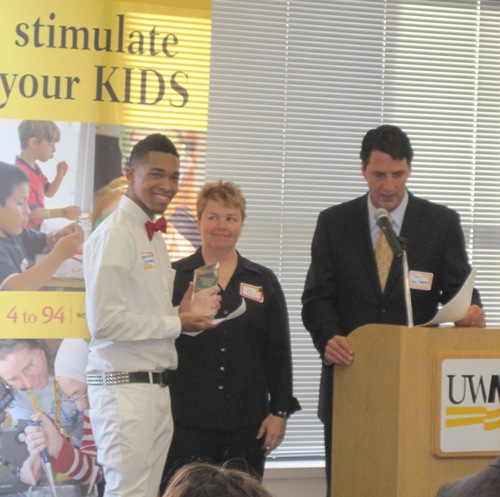 With a smile that could light a room, Mo spoke of his positive experience during his time at College for Kids.  Awarded the Outstanding Scholarship Student, Mo said CFK built his character, taught him to respect others as well as himself, and helped set him on a path to attend either the University Wisconsin Madison or Columbia.   He thanked all the wonderful teachers who mentored him during his five years at CFK saying, “Everyone has a special place in my heart.”

In the third and fourth periods, we heard from Former College For Kids Faculty Advisor Dr. Cyrus “Rus” Smith who shared some great memories of student learning in his 25 years at the school.  Then, Coach Karl put his auctioneer skills to use when the only live auction item for the evening was announced—a trip for four from Milwaukee to Denver on Southwest Airlines (maybe on the new nonstop that begins September 6), two nights at the JW Marriott in Cherry Creek, and amazing seats at a Nuggets game.

After the excitement of the final bid for the trip (around $2,000), Coach Karl continued his remarks about the importance of educating our children from an early age.  One story he shared was a fun educational exercise he had the opportunity to see during a visit to another nonprofit he supports.  Friends of Hoop works with children to teach them about the increase in monetary gain as one achieves different educational levels.  One hundred dollar bills are used to show how much someone with a high school education will earn per week.  And then, the same (but more) one hundred dollars bills are laid out to show how much someone with a college degree, masters, etc. will make.  Kids seem to really “get it” when they had the opportunity to see this example—it got them thinking about education!  And, that’s what it is all about—making education exciting for our children so they will be motivated to continue striving to learn more.

Finally, no exciting game is complete without overtime!  I had the opportunity to emcee the “Heads or Tails” raffle—it was a fun way to end the evening, award someone two roundtrip tickets anywhere Southwest flies, and raise more scholarship money that will send more students to College for Kids. 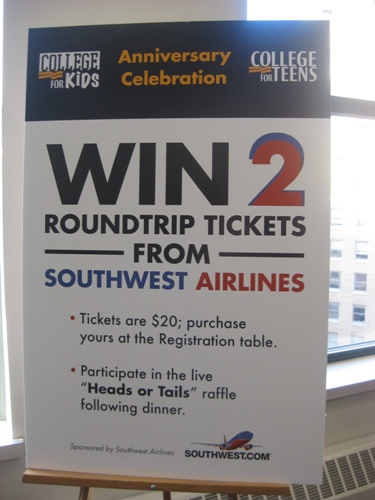 Congratulations to College for Kids on 30 years of educating children in Milwaukee!  As we heard with Mo’s remarks, you really do make a difference in the lives of our children.  Southwest Airlines was excited to be part of this special evening in Milwaukee!  Here’s to many more successful years!

I’ll close with those simple yet powerful words by which Coach Karl has lived—“Always give back—find a way to help others.”  Such good words to live by!