During the 40 years that Southwest Airlines has been flying, perhaps no airport terminal built during that time has transformed its airport like the current Atlanta terminal.  I base that statement because the current Atlanta terminal is based on connecting passengers, which isn’t surprising when you consider that the hub and spoke concept was born in Atlanta during the 1970s.  The Kansas City, Houston Intercontinental, and Dallas/Fort Worth terminals are just slightly older but they were all built to serve local traffic and have had to undergo many changes to serve as hubs.

This week, we look at Atlanta before AirTran, much as we have looked at Los Angeles, Chicago Midway, Newark, and La Guardia before Southwest.  My career path with Atlanta’s other big carrier included almost a year at the old terminal in 1979.  I literally worked during the old terminal’s last months of existence.  (The terminal was located on the northern perimeter of the airport property, just off Virginia Avenue and just west of Delta’s headquarters campus.)  When you consider that we were operating over 350 flights a day, Eastern a similar number, and with Piedmont and Republic (just after North Central bought Southern) having large operations in a terminal about the same size as Love Field, you know it was crowded, chaotic, exciting, and a last dose of big time “airlining” like our parents experienced. 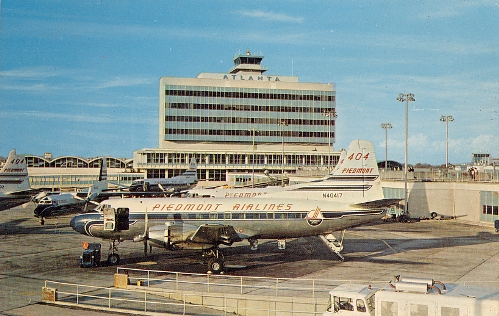 Let’s start with this post card that actually is from the 1960s.  The resemblance between the old Atlanta terminal and Love Field is obvious.  The roof to the left with the scallops was the ticket counter area.  Because this building was a few years newer than Love Field, it was built to a larger scale in the operational area, with a large baggage makeup area and more concourses.  Even allowing for that, it was outgrown as soon as it was occupied, as this 60s shot reveals.  Piedmont has crammed five Martin 404s and a Fairchild F-27 into a ramp area designed for two aircraft. 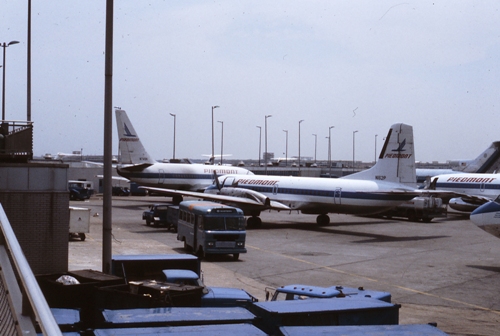 By the time I transferred to Atlanta in 1979, the Piedmont ramp area was just as crowded, and the aircraft were a lot bigger with 737s and a Japanese-built YS-11A filling the ramp. 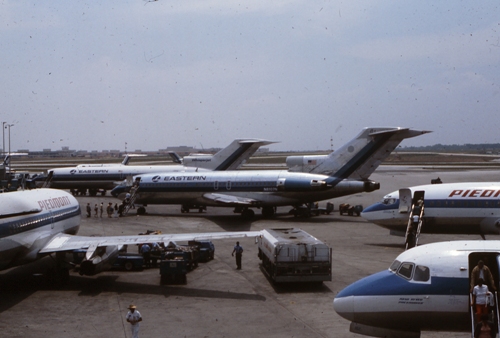 By this time, Eastern had built a large block concourse building on its part of the airport, but like Delta, it had outgrown its traditional part of the terminal and some flights departed from former Southern gates just beyond Piedmont.  The structures just beyond the far Eastern 727 are the current terminals—back then we called what would become the present facility the “mid-field terminal.” 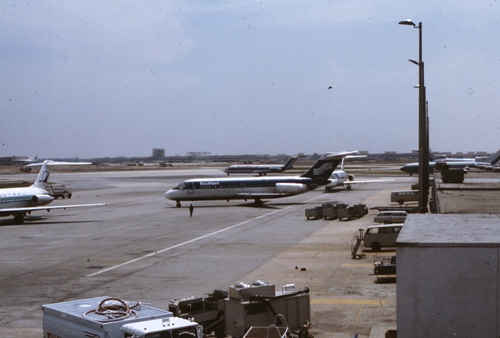 On the other side of that concourse we find Republic’s operation.  Most of the aircraft are still wearing their North Central and Southern liveries.  Delta had expanded to the old United (former Capital) concourse out of the picture to the left.  One night I was picking up mail from a 727 that was parked just to the left of the truck at the bottom left of the photo.  A Republic Convair 580 was parked right where the white line on the ramp ends just beyond that truck.  The 580 tried to power out of the gate, but it had been parked too close in.  The wingtip lacked about 2 inches from clearing the 727’s center engine exhaust.  It was quite a show while the 580 went back and forth in reverse thrust to gain those two inches.  Finally, the 727s was pulled forward to allow the 580 to clear. 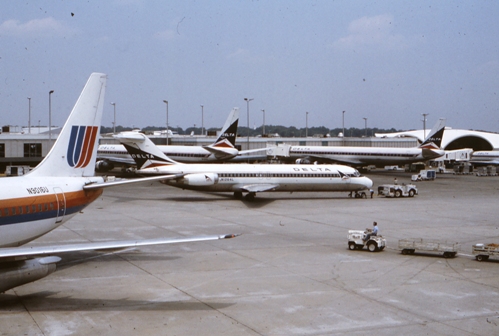 Above we see the two main Delta concourses.  The distances between concourses wouldn’t allow larger aircraft like DC-8-61s to taxi into the gate on their own power.  They also had to be pushed out to beyond the concourse ends on departure.  This added substantially to the ground time.  At the very far end of the second concourse, Delta built a remote parking area that handled up to nine aircraft (727s and DC-9s) on live flights.  Passengers checked in at a big hold room and caught busses out to their flights.  Because the concourse clearances were so tight, aircraft traffic was one-way in at the start of a flight complex and one-way out at the end.  Pity if you were on a late-arriving flight or a flight that needed to return to the gate.  You might have to wait over a half-hour just for the traffic to clear.  Also, by this point the current runway configuration was in use, so flights landing on the south runways had lengthy taxi times to detour around the new terminal construction.  Oh, take a look at the guy on the bag tug going between the United and Delta aircraft.  That was my job most of the time in Atlanta, transferring air mail to and from flights.  Driving tugs on these crowded ramps filled with moving aircraft was a challenge.  Moving through the terminal as a passenger was equally challenging, and traffic lines were painted on the floors inside the concourse to keep in and out foot traffic separated.

Much has changed since I worked in Atlanta in 1979, with maybe the biggest change being that AirTran is now part of Southwest.  I can’t say I miss that old terminal, but I am glad to have had the opportunity to work there.