I love going to airliner shows, and I always try to attend at least the one held here in the Dallas/Fort Worth area.  Over the years, I have developed very specific interests, and those are books, timetables, and postcards.  I especially like postcards because they often have a personal meaning for me.  This year’s show was a few weeks ago, and I think I hit the jackpot. 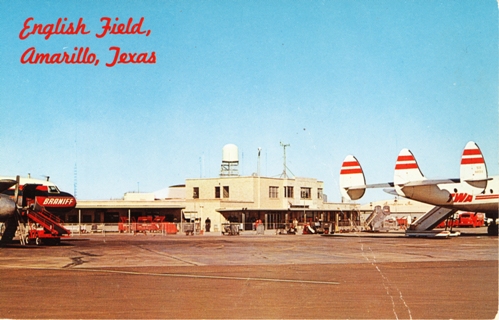 You may have noticed that I write about Amarillo a lot when it comes to my personal history with aviation.  Well, the postcard above of the old terminal there captures the very spot where I became enthralled with commercial aviation, and I very well could have  been at the airport when this photo was taken.  If we were flying on a trip with my family, we would have been inside the terminal awaiting our flight.  If it was a summer day, when I went to work with Dad (who was Continental’s Station Manager), I would have been on a ramp tug just behind the Braniff Convair, which was back of Continental’s ticket counter and ops room.  Since TWA was the longest serving airline, it always got the parking spot closest to the main lobby, then Braniff, then Central, and then Continental.  TWA flew their Constellations to Albuquerque (on the way to Las Vegas or Los Angeles) and Kansas City, Wichita, or St. Louis, and getting to see one in action was the highlight of any trip to the airport. 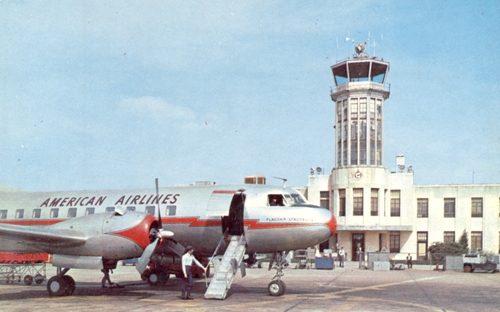 Moving a bit closer to my current home, I found two early photos from the Fort Worth Airports.  The first one above shows the old passenger terminal at Meacham Field with an American Convair 240, Flagship Lynchburg.  Some sources list the date on this photo as 1951, which seems correct.  American started receiving Convair 240s in 1947 and the new Amon Carter Field opened in 1953, just south of the current DFW Airport.  Check out the unusual control tower on the old terminal.  When it was first built, the cab of the tower was taller and looked more like a light house.  It received the treatment you see here later in its history.  Unlike its successor, Amon Carter, Meacham is still an active airport, although this terminal was razed in 1968. 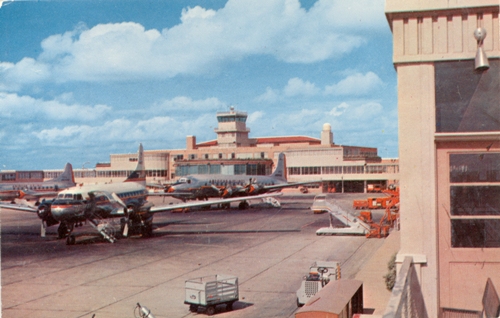 Speaking of its successor, the photo above is of Amon Carter Field not too long after it opened for service.  We see a Delta Convair 340 and an American DC-6 and Convair 240.  American Airline’s current headquarters campus sits close to where the main terminal was.  The building of Amon Carter intensified the airport rivalry between Fort Worth and Dallas because it was built closer to downtown Dallas than downtown Fort Worth, but the entrance faced Fort Worth.  The Wright Amendment compromise of 2006 appears to finally put the airport issue to rest. 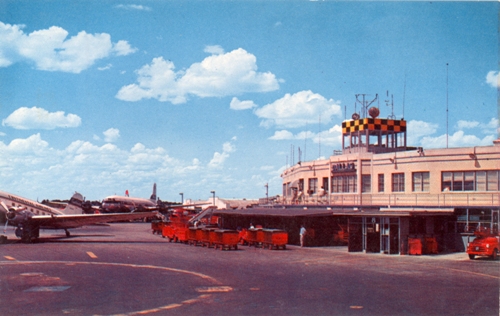 While Fort Worth was enjoying the luxurious new Amon Carter Field, Dallas was still operating out of the crowded Lemmon Avenue terminal, built before World War 2.  We can date this photo to a short two-year window between mid-1955 and January 1958.  The Continental DC-3 sets the former limit because Continental didn’t serve Dallas until it acquired Dallas-based Pioneer Air Lines in 1955.  And, the aft limit is due to the current terminal opening in early 1958. 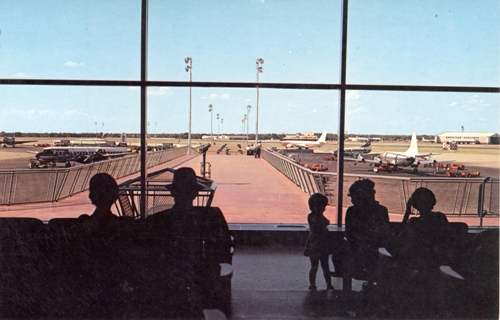 And finally, I got this early postcard of the current terminal.  The photo above is late 1959 or early 1960 because Braniff didn’t begin 707 operations until then.  The view is from the indoor observation area with theater seats and looks out over the outdoor observation areas.  I would spend summer days out there, once my family moved to Dallas in 1967. The original Lemmon Avenue terminal can still be seen just above the 707’s fuselage, and it was torn down in 1960 or 1961.  That's five postcards and five glimpses into my aviation history.