Recently, I was fortunate enough to attend the launch of Southwest’s service at Newark Liberty International Airport.  Inaugural service festivities are always a lot of fun, with tons of excitement, celebration, and SWA Spirit, and this one was no different!   To get up to Newark for the fun, I was one of over 100 Southwest Employees who rode aboard the “ferry flight,” a non-revenue, nonstop flight from Dallas Love Field to Newark to position an aircraft to begin our new service on Sunday, March27.   As we cruised from Texas to New Jersey, I did some reminiscing of my very first commercial flight—also a nonstop from Dallas Love to Newark.  It, too, was aboard a Boeing jet—only instead of a 737-700, my trip in 1964 was aboard an American Airlines 707.  Our departure in 2011 from Love Field was not extremely different than mine in 1964—last weekend, we departed from Love Field’s Gate 1, and back in 1964, American was operating from almost the exact same location in the then brand-new terminal.

However, today’s Newark Airport is a vastly different animal than what my family and I encountered when we arrived in 1964.  Newark Liberty in 2011 is a bustling, airy facility with multiple terminals linked by an elevated train which also provides great, quick access to commuter rail service to Penn Station in Manhattan, as well as Amtrak’s entire Northeast train grid.   Newark Airport in 1964 was a single-level, dingy, relatively unpopular facility with minimal amenities and no “modern” conveniences (such as jetbridges!).  I remember climbing down air stairs in the snow when we arrived, slipping and sliding across the icy ramp towards the terminal, and nearly getting blown over by the prop wash from a passing propeller plane.  (Remember, I was much younger—and lighter—then!)

These pictures from 1962 and 1964 (supplied by the Port Authority of NY/NJ) show how relatively small and antiquated the airport was back in the early days of the Jet Era.  It also illustrates what Newark Airport’s primary role was back then, which was for the most part short-haul regional service operated by propeller planes. 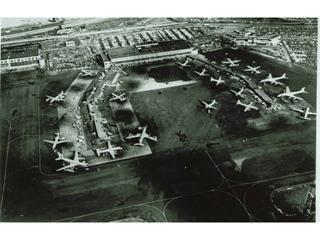 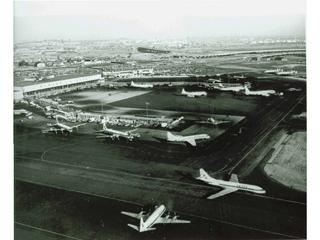 Other parts of the airport were equally cramped.  This picture shows how passengers walked in close proximity with service vehicles across the ramp between the aircraft and the gate—a good concept for sunny Southern California, but more problematic for New Jersey! 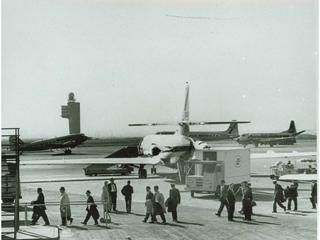 Here we see the sixties-era cab of the control tower, as well as the old tower itself (in the previous photo). 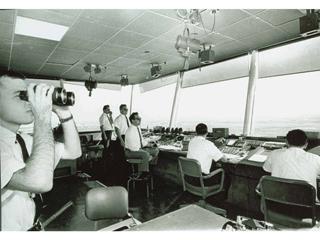 Again, for all of you airplane geeks—note that in this picture, there are two AA tails in the shot, one of which was of the elusive Convair 990! 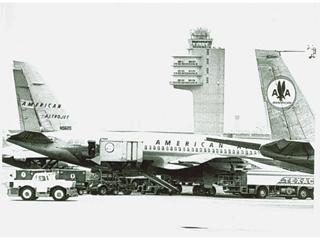 The last in this series of photos shows the congested ticketing lobby of the old terminal (note the group of school kids, presumably touring the airport, in the foreground). 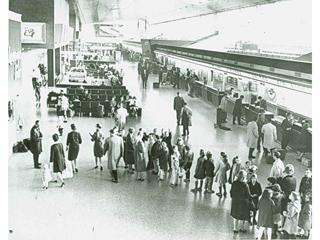 Newark’s modern, new terminal complex opened in phases, with the first phase (current terminals A and B) opening in the mid-1970’s, Terminal C in the 80’s, and improvements and enhancements continuing almost unabated to this day.  My thanks to Carol at the PANYNJ for providing a pictorial guide for my trip down memory lane.  After looking at them, however, I much prefer today’s Newark Liberty International Airport—specifically, Southwest’s new operation there.   We’ve set up shop in Terminal A, gates 14, 15, and 16, and we’re excited to be here.   If you’re in town, come on over and say “howdy,” and make some great new memories of your own.
615 Loves