In the early days, Southwest Airlines created more iconic images than an upstart carrier with just three airplanes should have generated.  I don’t think anyone ever said:  “Today, we’re going to make an icon.”  It just happened naturally.  Some of those images include the early television advertisement where a model dressed in our first Flight Attendant uniform strolls down a runway as a 737-200 screams by just a few feet above her head.  Another iconic photo shows our original Flight Attendants decked out in hot pants lined up on a 737’s air stairs, and my favorite is the 1972 photo (above) showing a line of Flight Attendants holding hands and running toward the camera.  The last-mentioned photo was so popular that it has been recreated for almost every landmark Southwest anniversary. 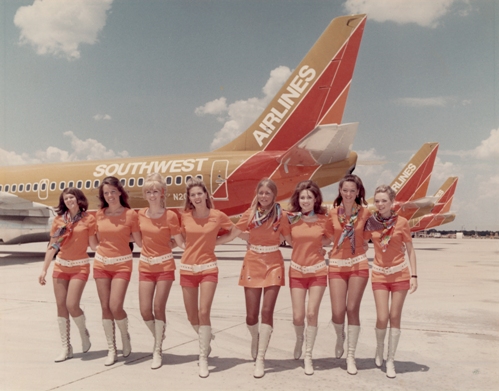 However, it wasn’t the only early Southwest iconic photo to have a remake.  I thought it would be fun to compare some of the more obscure “reshoots” with their better known originals.  Let’s start with the photo above.  Prior to beginning service on June 18, 1971, we took a series of publicity photos with our Flight Attendants walking behind all three of our original aircraft.  Note that “Southwest” is written on the fuselage, and the word “airlines” is displayed on the aircrafts' tails.  The location was our original hangar located near Bachman Lake. 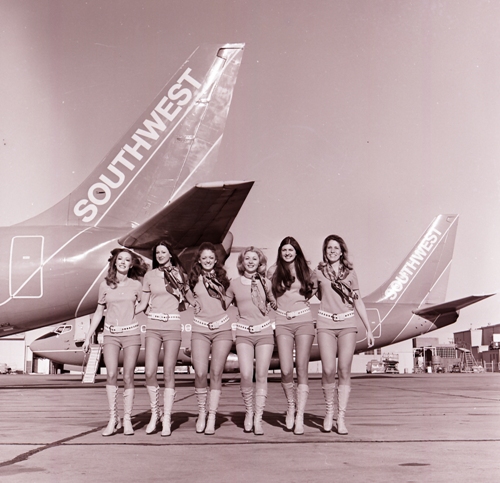 Just a few years later in the same location, we took a newer version, only in black and white.  There are a couple of clues that allow us to put an approximate date on the scene.  “Southwest” has been moved to the tail and “airlines" has been deleted.  This revision to the original livery began with the delivery of the fourth aircraft, N23SW, in November 1971, but the remaining original aircraft (N21SW and N22SW) kept their full titles at least until mid-1973.  (The delivery of N23SW was the event that triggered the sale of N20SW and the establishment of the ten-minute turn.)  Since we only had three aircraft at the time of this photo, one of these airplanes has to be an original with the modified livery.  This means that the photo must be mid-1973 or later.  And, because the original uniforms were worn until September 1974, the photo has to be earlier than that date.  That puts it into the 1973/1974 timeframe. 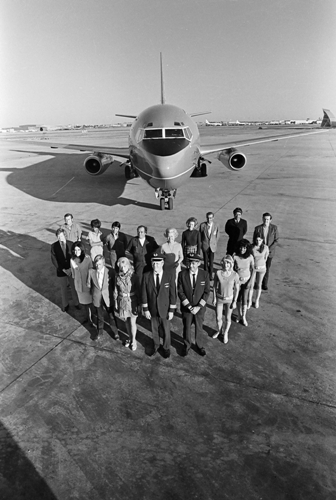 The same day that the running Flight Attendant photo mentioned in the first paragraph was taken, the photographer used a cherry picker to take photos that included representatives of each Employee work group.  The chosen image (above) had a wide distribution, and it is another favorite of mine because it shows Original Employees that normally didn’t get a lot of publicity.  Note the hangars in the background. 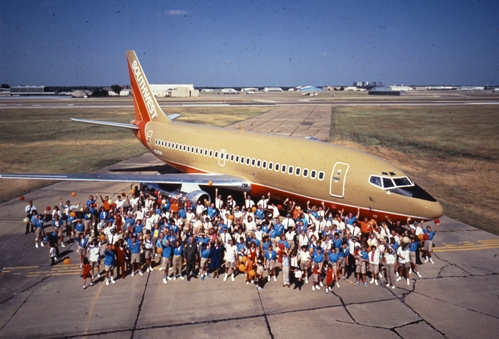 The photo above recreates the 1972 scene.  My guess is that this is from the early 1990s, and the location is the taxiway leading to our Dallas Maintenance Base.  The hangar in the distance above the nose can also be seen in the 1972 version.  Like some of the other photos in this post, we have clues that help us date it.  Many of the Employees appear to be wearing their blue nautical style uniforms that were introduced in February 1990.  At extreme enlargement, it appears that the airplane is 737-200, N54SW.  This airplane left the Southwest fleet in September of 1990.  Based on that and that there are so many folks wearing shorts in the photo, it was probably taken in the spring or summer of 1990.  It’s even possible that the photo was taken after N54SW ended its Southwest service but before it left the property. 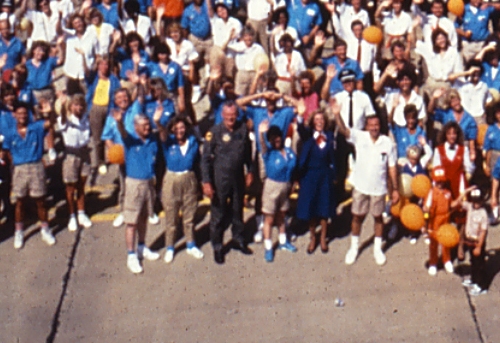 Yes, that’s Herb in the front row, and he appears to be wearing an Air Force flight suit. 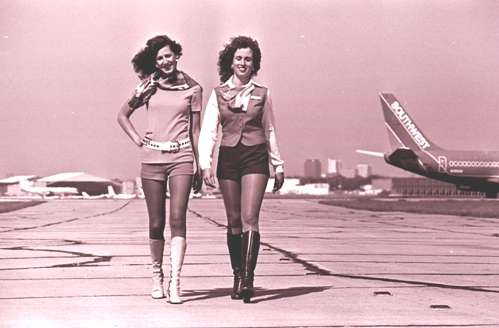 And, remember that commercial with the airplane screaming over the actor portraying the Flight Attendant walking down the runway?  The photo above pays homage to that ad as it shows a Flight Attendant in the original uniform walking down the runway (actually, it is a taxiway) next to an Employee wearing the uniform introduced in 1980.  This may have been a publicity shot for our tenth anniversary in 1981.

Scroll back through these photos and you see confidence, energy, and a bit of swagger in the images.  We see personification of the attitude that would later be described as Living the Southwest Way: a Warrior Spirit, a Fun-LUVing Attitude, and a Servant’s Heart.  Considering our humble beginnings, Southwest could have labored in anonymity down in our little corner of the Texas sky.  But thanks to these photos and the Employees illustrated in them, our national reputation grew to a dimension all out of proportion to our size.  Frankly, it would be impossible to take (or retake) most of these photos today with the way airport security has changed.  That’s one of the reasons these images are so unique and important.  They are symbols of our beginnings and a reminder that our work is still not finished.