In the beginning, there were flights.  Those Southwest Airlines flights served Dallas, Houston, and San Antonio.  Flight Attendants and Ticket Agents in hot pants and big smiles served our Customers, but American Airlines served as the initial point of contact for most of those Customers.  For the first year and a half (up until March 1973) of Southwest’s existence, American’s Reservations Office near the old Greater Southwest International Airport in Fort Worth handled Southwest’s reservations calls.  At the end of the day, American would forward the next day’s flight booking information to Southwest.  With just a handful of daily flights the system was simple and worked well. 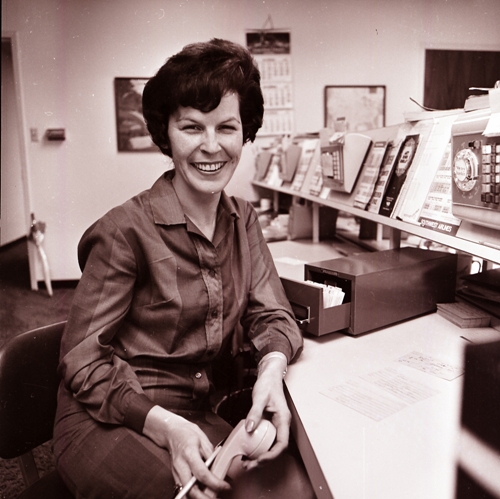 As loads grew, especially after the $13 Fare War in early 1973, Southwest opened our own Reservations Center on North Watson Road in Arlington with leased space in an office building.  The Dallas Reservations Center (DRC) opened with 17 Reservations Agents filling 15 phone positions.  Original Employee Karen Ordner (above), who had begun with Southwest on June 1, 1971, in Revenue Accounting, was DRC’s first Manager.  Karen recently donated materials dating back to these earliest days to the Southwest Archives, and we are fortunate to share some of them with you here. 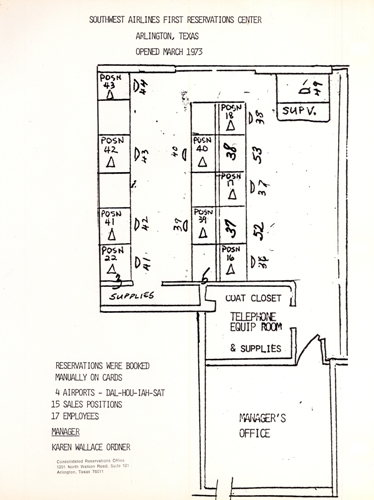 Among Karen’s items are several seating diagrams for DRC.  The one above shows the layout of the office in its initial 1973 incarnation.  A small conveyer ran down between the facing tables, and it carried the reservations cards from the Agent making the reservation to the Agent maintaining the flight inventories.  The telephone room housed the center’s only technology, the phone equipment. 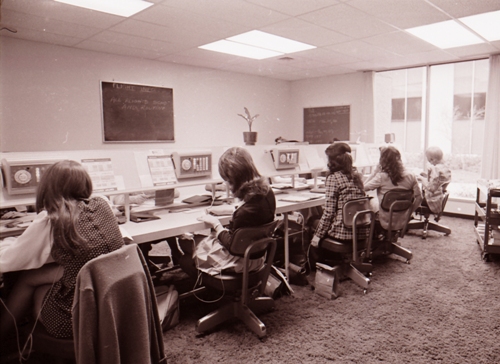 This photo illustrates the two center rows of sales position, and the phones are multi-line rotary units.  At least the Agents have headsets, and the blackboards on the wall display current flight and fare information...  Note the thick 70s style shag carpeting on the floor and the solitary plant on the top shelf.  The Agent at in the middle of the photo has her sack lunch on the floor next to her. 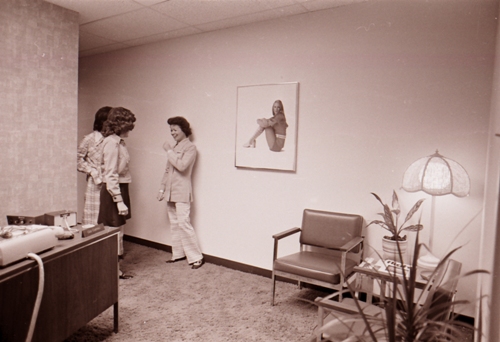 Next we have the entrance to the Manager’s office.  Compare the sparsely decorated walls with any current Southwest facility.  The solitary wall hanging, a framed poster, was one of a series of posters featuring our Flight Attendants that were displayed at our facilities.  The woman on the right of the other two Employees is Geri Campbell. 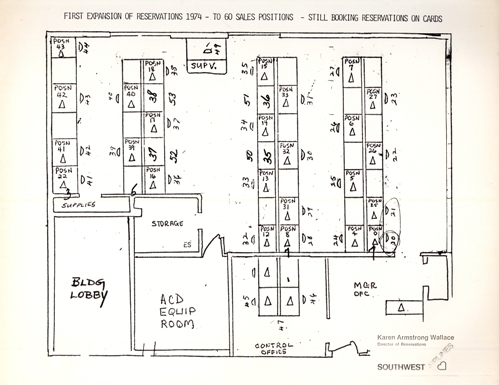 Fortunately, our loads continued to grow, and by mid-1974, DRC was expanded to 60 sales positions with a staff of 160 Reservations Sales Agents.  The diagram above illustrates how the center expanded to the right of the original facility (which is at the far left).  DRC would expand one more time to occupy the entire first floor before moving to a new facility off of I-30 in Grand Prairie. 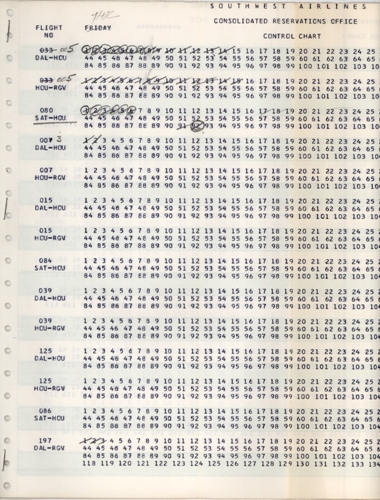 By the time of that third expansion, our Reservations Employees were using a computerized reservations system that utilized Bunker-Ramo computers.  (Karen donated some training materials for these computers, so stay tuned.)  But rather than explore that this week, let’s close with this artifact of the manual reservations era.  Above is part of a “Control Chart” for a day’s flights.  The column on the left has the flight numbers and city pairs.  (RGV is Rio Grande Valley, or Harlingen, so we can date the chart from after February 11, 1975.)  As a seat was booked, the next available number was crossed off the page, and when all the numbers were crossed out, the flight was full.  The system was extremely simple, and since there were no flight manifests, it relied a lot upon the honor system.  Although the reservations cards (the equivalent to today’s Passenger Name Record), contained Customer names, Karen told me that the only time a name was referenced was in the case of an oversold flight.

Today, Reservations has become Customer Support and Services (CS&S), a name that more accurately reflects our CS&S Employees roles in the online age, but one thing hasn’t changed:  You can still “hear” our Employees' smiles coming through the phone anytime you have the occasion to call Southwest Airlines.