From Aisle Seats to the Wedding Aisle: A Chance Meeting at the Nashville Airport Led to our Forever

March 20, 2016 may have been a normal Sunday to most folks, especially to those traveling through Southwest’s terminal at Nashville International Airport. However, it was the start to a fairytale love story for two of those travelers.

At the time, I was a mechanical engineer returning to Kansas City after spending the weekend in Nashville for a bachelor party for one of my best friends. Katie was a grade school teacher from Columbus, Ohio, flying to Orlando to meet her sister for a spring break trip to Disney. Like me, Katie had also spent the weekend in Nashville for a bachelorette party for one of her best friends.

Wedding parties in Nashville were one of just many commonalities between the two of us. We ended up sitting next to each other at a restaurant in the terminal and struck up a conversation. After completing dinner, we learned that our flights to Kansas City and Orlando were at adjacent gates. We decided to walk to the gate area together and sat down while waiting for our inbound flights to arrive. 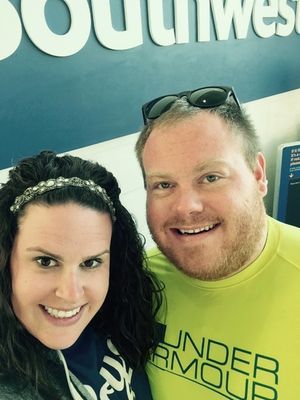 One year from the day that we met.We continued our conversation and learned that we both loved country music (we were in Nashville, after all), enjoyed traveling to different cities (especially flying Southwest), and rooted for Notre Dame in college sports (Go Irish!). Sadly, the conversation came to a close as we both had to line up to board our respective flights. Before we got up, I asked Katie for her phone number, and she happily obliged.

When Katie arrived in Orlando, she turned on her phone and found a text from me stating how much I enjoyed spending time with her at the airport, and how I hoped that we would keep in contact. This would be the first of many texts to transpire between us, and we traveled several weeks later to Indianapolis for our first date together—the 100th running of the Indy 500. Needless to say, we haven’t looked back since.

For the next two-plus years, we dated long-distance and would travel to see one another nearly every two weeks. All of this travel occurred on Southwest, and we never had a negative experience with our travels. Long-distance dating can be extremely challenging and emotionally taxing at times, but knowing that we were traveling with a thoughtful, caring airline helped ease the difficulty of the distance between us. 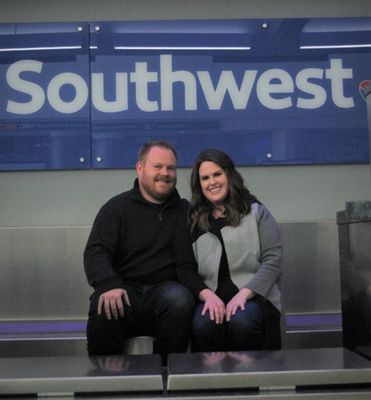 At the airport we know best, CMH. (Photo by Cobi Grace Photography)Through our travels, we encountered many friendly and helpful Operations Agents and Flight Attendants—we even made many friends with the Southwest staff at the Columbus Station. Even though we lived hundreds of miles apart, each night we would tell one another, “I love you to BNA and back” which was a nod to our first meeting in Nashville.

Throughout 2017 and 2018, we continued to fly Southwest to see one another multiple times each month. During this time, I took a promotion and relocated from Kansas City to Fort Worth, TX, and my job required even more travel with Southwest. As a result of my frequent business travels, as well as using the Rapid Rewards credit card, I was able to earn A-List status (A-List Preferred in 2018) as well as a Companion Pass, so Katie could accompany me on flights when we were in the same city.

In September 2018, after two years of dating, I proposed to Katie in downtown Columbus. All of our immediate family members were able to watch the proposal occur, and there was great celebration by many of our friends and family afterward. This group included our Southwest Family at the Columbus Station, as a couple of them even knew about the engagement beforehand. The Columbus Team also assisted us with our engagement photos, as we wanted to incorporate Southwest into the shoot. After all, Southwest was how we had met, and the airline had such a strong presence in our continuously growing relationship. 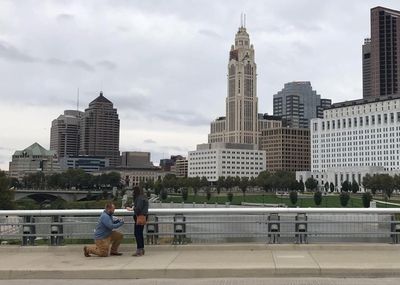 The moment when Katie said yes to spending forever with Sam.

We will be tying the knot in November 2019 and are continuing to frequently fly Southwest as we work on planning our wedding, and more importantly, spending time with one another. Even when we are permanently in the same city, we plan to continue flying Southwest for trips to see our families as well as to explore new cities (and attend our honeymoon).

We could not have asked for a better second family than the Southwest Airlines Employees, and we are forever grateful for our chance encounter in Nashville. In the end, our love story was #LoveAtFirstFlight. 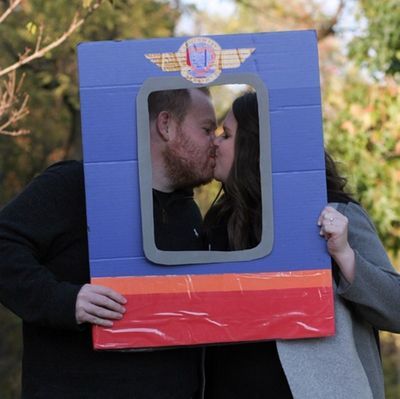 The influence of Southwest was quite prominent in our engagement photos. (Photo by Cobi Grace Photography)