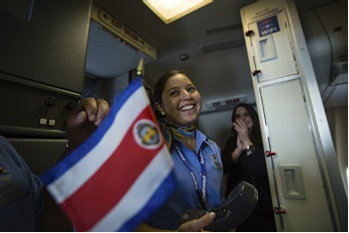 For the first few months of operations back in 1971, there were only two routes (DAL-IAH and DAL-SAT).  Both of which were record holders – the flight to Houston (Intercontinental) being the shortest at 216 miles, and the San Antonio flight held the title as the longest at 248.  It wasn’t until 1975 that the next longest record was set when Harlingen opened 277 miles to the south of Houston Hobby as our fourth Southwest city. As we began expanding throughout Texas and points beyond, our flights gradually grew longer while becoming a major airline.  With the introduction of the 737-700, the ability to fly nonstop from one coast to the other finally became a reality.  On Thanksgiving Day in 1998, we operated our first transcontinental flight between Oakland and Baltimore.  Coming in at just under 2,447 miles, it was a flight that held the title for almost 20 years as the longest regularly scheduled flight in the Southwest system. Today, a new record has been set as we launch the Company’s longest-ever nonstop flight between Los Angeles and Liberia, Costa Rica.  With a total distance of 2,627 miles “as the crow flies,” our extremely versatile 737-700s now connect Southern California with the popular Costa Rican resort destination.  Complimenting existing service from Houston Hobby and Baltimore, the LAX-LIR flight represents another historic milestone as our international service continues to grow.
10 Loves