How the Southwest Airlines LUV Classic Came To Be

In 1983, Southwest Airlines Captain Dick East (now retired), who had recently lost his young daughter to cancer, took a couple of his fellow Pilots, who were "overnighting" in Houston, to visit families at the local Ronald McDonald House.  At the time, we only had one Crew Base (located in Dallas), so we had a lot of Pilots and Flight Attendants overnighting in Houston.

On his next Houston overnight, Captain East took a few more Crewmembers to the House, but this time he also brought food and cooked dinner for the families.  Soon after, Captain East approached the Southwest Airlines' Pilot Association to see if they might be willing to cover the costs for monthly dinners at the house.  They agreed, and the Southwest Airlines Pilot's Association still pays for those dinners to this day - 25 years later.

Captain East began to invite "guest chefs" like our beloved leaders, Herb & Colleen, to cook at the house.  And, the Dallas Inflight Department soon began cooking dinners at the Dallas Ronald McDonald House.  These dinners were, and still are, paid for by the money generated by rented vendor-space on the fifth floor of our Headquarters building (previously located in the Inflight Crew area at Dallas Love Field).

In 1985, the airline that LUV built officially adopted the House That LUV Built, and gave every Ronald McDonald House in the Southwest system at the time $10,000, for a total of $210,000.   And, today, the Employees of Southwest Airlines continue to serve 72 houses in 64 cities.

In 1986, Dallas-bar owner Joe Miller discovered that he had contracted cancer, and his clientele decided to host a parking lot party and golf tournament to help raise money for his medical expenses.

A year or two after Joe passed away, the Ronald McDonald House Board was discussing fund raising ideas.  They decided to host a golf tournament and party in Joe's honor.  Southwest Airlines President Emeritus, Colleen Barrett, who was serving on the board of the Dallas house, volunteered a Southwest Airlines Employee to put on the party, but insisted that we wanted nothing to do with the golf tournament.

Our first "Joe Miller Parking Lot Party" was held in an open lot behind Joe's bar on a Saturday, and the golf tournament was held on the following Monday.   That Saturday, it was POURING RAIN when I arrived at the bar at 9:00 a.m., threatening to ruin the entire event.  Joe's wife, Linda Miller, asked me if I wanted a drink!  I turned her down, but in hindsight I probably should have taken it.  To salvage the party, I got on the phone and called tent people, hay people, plywood people and anyone else I thought could help save our fundraiser.  It finally stopped raining around noon, but, by that time, we had a tent up that must have been about as big as our Headquarters building...it was huge!

The tent man was on a 6:00 p.m. flight to Las Vegas with the tickets I had given him in exchange for the tent, and it turned out to be a great party!

On Monday morning, tournament day, it was raining again. As I was heading to the golf course for the 11:00 a.m. sign-in, Colleen called me and said "there is no way they can play golf in this weather!  Make sure there is plenty of alcohol!"  I said okay, and called our Provisioning Department.  About ten minutes later, a Coworker called to inform me that, unbeknownst to me, the after party would be held at my house!

Of course, I said "no way, I am leaving, and my house is dirty."  Long story short, my friend called in sick, cleaned my house for me, and Sam Irwin from Duck Soup and John Heal, who has worked on the event from the beginning, came to my house and cooked a wonderful Italian meal for everyone.  To this day, I still host an after party at my home after the event!

In a meeting following that first event, we were trying to figure out how to raise more money - the first event had 85 golfers and raised around $35,000.   At the meeting, Herb said "Annie, we had all this top quality high end liquor - we could get the cheap stuff and it would be okay."  I told him we hadn't paid for any of the liquor, and he slapped me on the arm and said, "Don't you dare change that!"

Southwest Airlines took over the event the first year - including the golf tournament!  And, in 1988, the event was renamed the "LUV Classic."

We have sponsored the Dallas LUV Classic event for 23 years now, donating over $10.6 million to Ronald McDonald Houses across the Southwest network.  For several years, the Dallas Business Journal has even rated us second in monies donated to charity (behind the Byron Nelson...so in my mind we are number one since the Byron Nelson is a professional PGA tournament).

We launched the Phoenix tournament in 2000 and have donated over $2 million in monies raised from that tournament.  Over the years, Southwest Airlines has donated lots of money and lots of time to this effort, but the best thing we have done is simply bring public awareness to the Ronald McDonald Houses and the amazing service they provide for families. 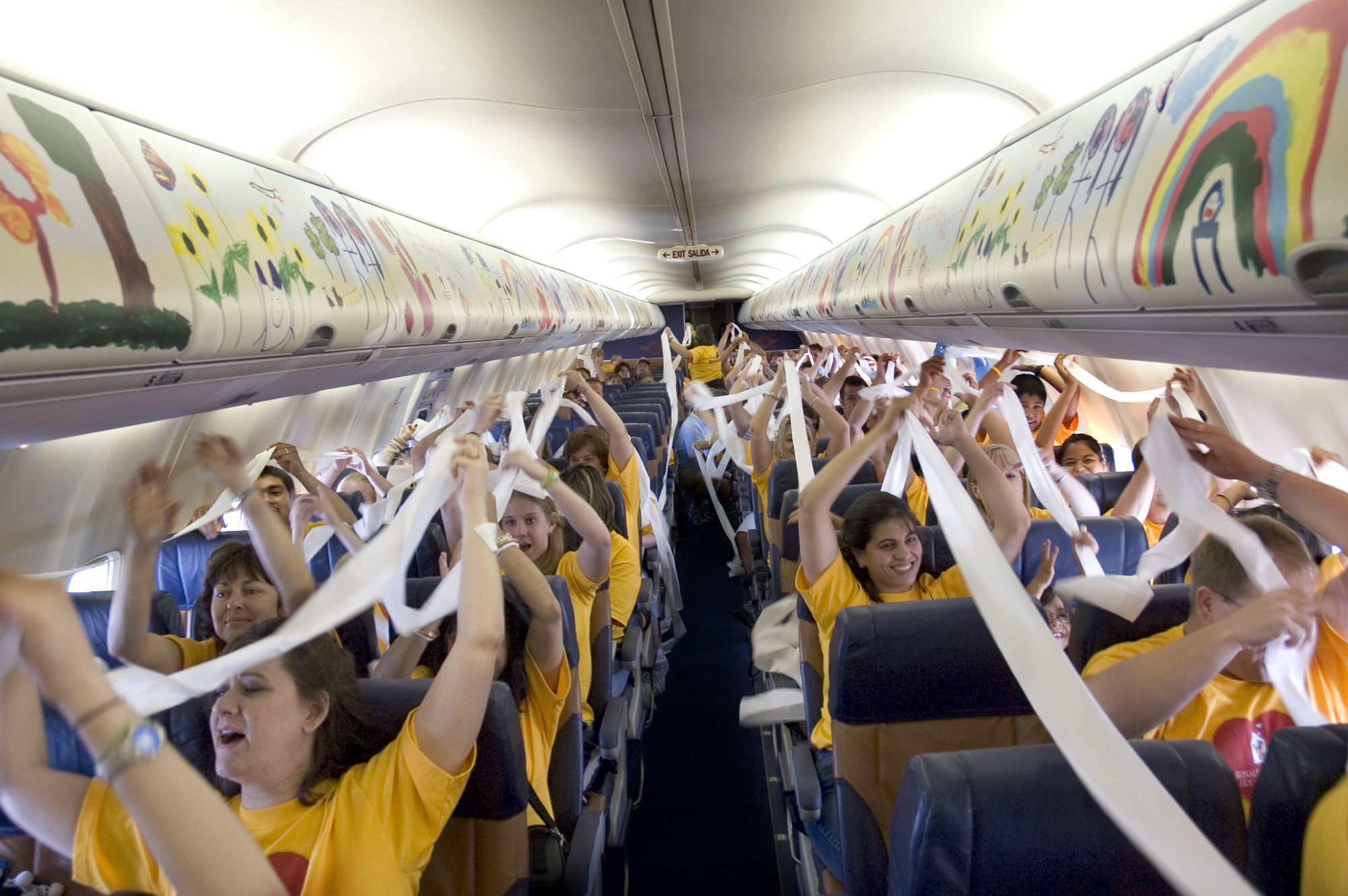 The overhead bins on the The Spirit of Hope feature artwork created by children, who, at the time, were staying at the Ronald McDonald House in Seattle.  If you haven't had the opportunity to travel on this aircraft, take a look at the photos above and below.

When we began cooking at the Dallas house, no one else was.  Today, they have companies cooking or providing food three meals a day, seven days a week, as a result of what Captain Dick East and our Employees started.

I share all of this to get one simple message across...don't ever think doing one small thing can't become a HUGE THING!  All Captain East thought back in 1983 was that he would take a few Coworkers over to the Ronald McDonald House to visit with families.  And, that small thing was the beginning of probably the best relationship between a Corporation and a charitable entity that exists today and that ever was.

Houston's ABC 13 recently ran a news story featuring Captain East and his efforts to support the families of the Ronald McDonald House.  To view, click HERE.

For a video about the LUVClassic, please click here.

brent-bowen
Not applicable
I LUV you Annie, and I miss seeing your face every day! I hope the LUV Classic and Party are successful this evening, and really wish I could be in PHX with you all to celebrate! with LUV and best regards, Brent
14 Loves

Emily2
Not applicable
It is such a joy to me to take part in serving meals at the Ronald McDonald House, whether it's with my church or with SWA. And all this time I never knew how they got started. What a wonderful story!
16 Loves