IT'S HERE! We kept it under wraps as long as we could, but today I'm so excited to announce the unveiling of Florida One--a Boeing 737 emblazoned with an artist’s rendering of the state flag.  Florida One has been secreted away in a private hangar somewhere in the state of Louisiana this week, so I can speak for a lot of people when I say we are so ready to finally show it off!  Southwest kicked off the event with a press conference in a Tampa International Airport hangar with our CEO Gary Kelly, National Wildlife Refuge Association’s President Evan Herche, and Southwest’s Florida-based Employees. 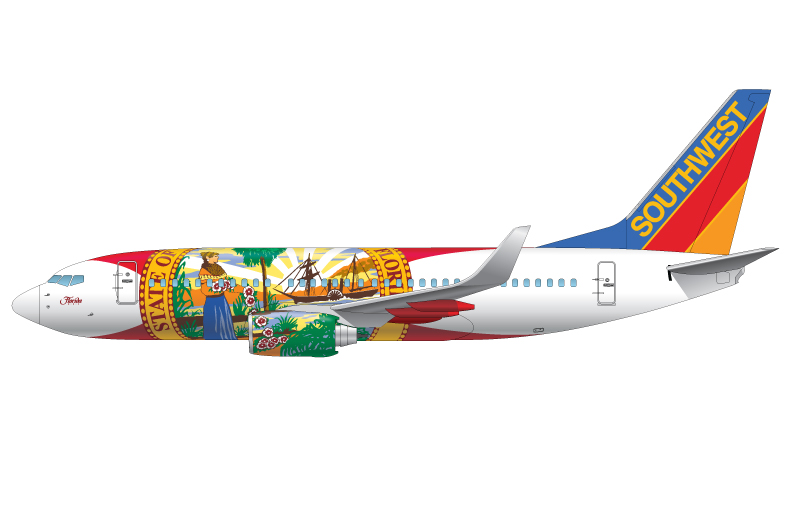 To see video of our beautiful Florida One, please visit: http://blogsouthwest.com/video/introducing-florida-one


Florida One represents our ties to the Sunshine State since beginning service in January of 1996.  We opened two cities on the same day back then:  Ft. Lauderdale/Hollywood and Tampa Bay.  We've grown from 17 daily nonstop departures to 284 daily nonstop departures, and now carry 20 percent of all air traffic to the state of Florida.  And last (but certainly not least) we begin service to our seventh Florida city, Panama City Beach, on May 23, 2010.

Check out our undercover plane as it's being unwrapped:

More than 200 Southwest Airlines Employees and community leaders celebrated the unveiling this morning at Tampa Airport, and around 11am EST, the aircraft will begin a whistle-stop tour of our Florida cities. At each stop, we'll host a "welcome party" in the Southwest gate area to show off our newest Boeing beauty to Employees and Customers.

Our tour of Florida will touch down at:


The newest aircraft in the Southwest Airlines fleet is truly a work of labor and art, requiring 32 people at the Boeing Company working three shifts over the course of eight days to paint.  Over 46 gallons of paint and 16 different colors make up Florida One.  (That sounds like a Trivial Pursuit question waiting to happen.)

I've gotta run for now, as I don't think Florida One will wait just for me. Be sure to follow @southwestair for updates throughout the day (hashtag #FL1) and I'll see you in Jacksonville!