The December 2010 issue of D CEO Magazine reports that Southwest Airlines' Gary Kelly was named Dallas-Fort Worth's CEO of the Year by respondents to the SMU Cox School's 2010 CEO Sentiment Survey. This is the second straight year that respondents to the annual Cox survey have given Kelly that honor. 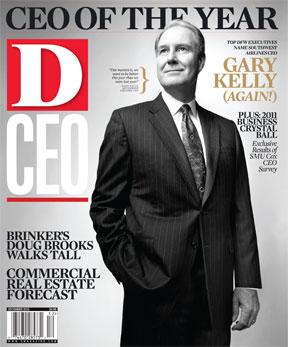 In the magazine's December cover story, titled "The Second Time Around," writer Steve Pate explains how Southwest's president, chairman and chief executive led the Dallas-based airline through a thorough review of its operations in a challenging business environment, setting the stage for two "blockbuster" moves in 2010.

First, Southwest said it would consider adding the larger Boeing 737-800 aircraft to its fleet. Then, in the most significant deal in its 40-year history, the airline said it would acquire rival AirTran Holdings Inc., giving Southwest its first international routes as well as access to an additional 38 airports, including--most importantly--Atlanta.

Thanks to Kelly's steady hand and visionary leadership, Pate writes, Southwest has grown to become the largest U.S. airline, based on the number of customers served. And, not so incidentally, 2010 marked the 38th consecutive year that the airline has turned a profit.

Little wonder that Kelly, the man named Dallas-Fort Worth's CEO of the Year by his peers for the second straight year, concludes: "Our momentum is very good."

Destination Bay Area: Going beyond the City by the Bay

No enforcement of mask rule