Jim and his "Scheduled" Collection 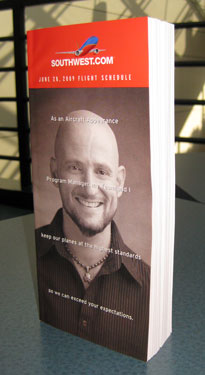 Jim McOmber is a collector. He collects flight schedules of two airlines; Braniff and Southwest Airlines. On this episode of Red Belly Radio, I interview Jim McOmber. Obviously there is a finite number of Braniff flight schedules since they ceased operations in 1982 (Jim has almost all of them).

Southwest Airlines has printed schedules since our beginning but have now decided to stop to save money and paper but especially since the information is so readily available online.  It seems we were the last of the big airlines that was still printing schedules, so we are joining the club of airlines with a finite number of printed schedules. 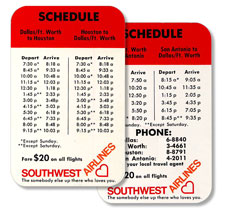 Jim has worked in the travel industry since the late 1970s and easily knows the Southwest Airlines flight schedules better than I, but he also maintains lists of city pairs and the number of flights Southwest Airlines operates between them. Clearly Jim likes his chosen industry.

To see an example of the additional work Jim puts into each schedule, and the Braniff/Mid-Continent Airlines schedule cover, view the attachment entitled: JimMcOmber.pdf

merrill3001
Not applicable
I am disgusted with some of the flight attendants at Southwest. They seem to think that it is ok to forget their professionalism when it comes to dealing with the public. My wife and I were yelled at for asking a flight attendant for a beverage. We were unaware that they had stopped services due to turbulence since we were napping at the time turbulence occurred.
5 Loves