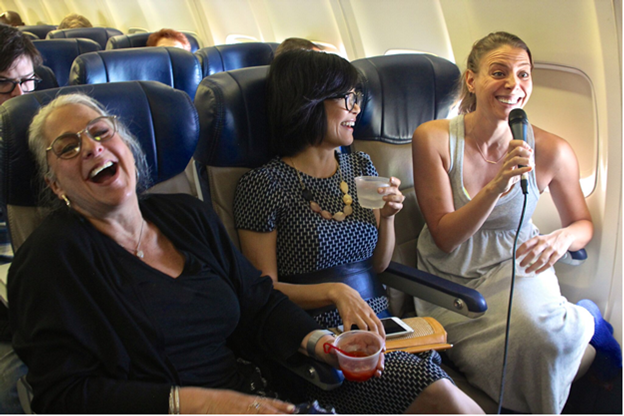 At Southwest, we’re used to doing things a little differently than everyone else. Our sponsorship of the 2015 ATX Television Festival is no exception. In the past, we’ve presented concerts through our Live at 35 program, and even welcomed models onboard for a fashion show, but we couldn’t say that we had hosted a television panel in the sky. That’s why we leapt at the opportunity to host the very first panel of this year’s Festival onboard our “ATX Party Plane” flight from Los Angeles to Austin. An outstanding panel of women in television including Marta Kauffman, co-creator of “Friends”; Keiko Agena, star of “Gilmore Girls”; and Stacey Oristano, star of “Bunheads” and “Friday Night Lights,” answered a series of questions posed by our friends from Entertainment Weekly. Passengers onboard even had an opportunity to ask their own questions. You can watch a recap of the panel in the video below. (Fun Fact: One of Marta’s favorite “Friends” jokes is when Joey defines a “moo point.”) Southwest also was the official music presenter at the annual fan favorite Friday Night Lights Tailgate event, during which we presented performances from Delta Spirit, a band whose song “Devil Knows You’re Dead” is featured in the final episode of “Friday Night Lights,” and a surprise performance from the fictional-turned-real-life band, Hep Alien, from “Gilmore Girls.” (Our inflight panelist Keiko Agena on drums!) We strive to offer our Customers a truly unique experience both in the sky and on the ground. We’re lucky that the ATX Television Festival allows us to do both.
4 Loves