Las Vegas is one of Southwest's largest operations, and Dr. Daniel Bubb, the Director of Academic Assessment at the University of Nevada, Las Vegas has written a new book looking at how airlines have helped make Las Vegas the destination it is today.  Dan has graciously shared some of the highlights of his book.

June 10, 1926 was a historic day for commercial aviation in the United States when Maude Campbell, a telephone supervisor and public relations clerk from Salt Lake City, became the first female passenger to ride on a commercial flight. She paid $180 (a hefty sum of money at that time) to fly round trip from Salt Lake City to Los Angeles via Las Vegas aboard a Western Air Express Douglas M-2 mail plane piloted by former World War I pilot Al DeGarmo. Campbell was given a flight suit, golf knickers, a parachute, a tin can, and was told if anything catastrophic happened to the plane en route to jump, count to three, and pull the chord. Upon her arrival in Los Angeles, a group of news reporters asked her questions about her experience to which she replied that she was thrilled to fly, but found the seat (a mailbag) uncomfortable and the engine noisy. This was a common experience for passengers who flew in the 1920s and 30s. They had to pay high fares, sit in uncomfortable seats, and cope with the droning noise of the propeller-driven radial engines that also coughed noxious exhaust fumes into the cabin. It was a far cry from the more pleasant experiences passengers had decades later riding in more luxurious airliners such as the Douglas DC-8, Boeing 707, and the Boeing 737.

Recalling his first experience flying on an American Airlines Boeing 707 jetliner from New York to Los Angeles in 1959, transportation journalist Daniel Solon expressed how pleasant his experience was being served meals and beverages by professionally trained flight attendants, and arriving in Los Angeles five and a half hours after departing New York. Similarly, a 1960 Las Vegas Review-Journal editorial praised the size and speed of the passenger jet claiming, “The speed of the jets will be so fantastic that a trip from New York to Las Vegas will take only as much time as a jaunt from Denver to Las Vegas does now.” With faster, larger, and more comfortable jet engine-driven planes replacing older propeller-driven planes, commercial air travel grew at an unprecedented pace as millions of passengers filled airport terminals and gates nationwide waiting to board their flights. The phenomenal growth forced San Francisco, Los Angeles, Phoenix, Denver, and Las Vegas airports to accelerate their expansion plans in a desperate effort to keep up with air travelers’ needs. In Las Vegas, improved air travel service, a larger and more inviting airport, better flight schedules, and larger and more luxurious resort casinos attracted throngs of air gamblers and tourists. Low fares also lured them.

Since the mid-1950s, Las Vegas had been a low-fare market. Junketeers William J. Moore and Warren “Doc” Bayley pioneered the concept of the package deal, which included affordable airfare to draw middle and lower-income travelers. As a result, their junket air travel businesses became enormously successful (Bayley’s Hacienda Airlines was the most successful junket air travel business in the United States from 1959-1962, averaging more than 150,000 passengers per year). Soon commercial airlines adopted the same concept. Also deregulation of the airline industry in 1978 helped Las Vegas become a perfect fit for low-fare airlines like Southwest.

Priding itself on offering frequent flights, excellent customer service, and low fares, Southwest quickly became a major contender with United, Delta, American, and other airlines in the Las Vegas market. In the 1990s, Southwest offered $29 one-way fares between Los Angeles and Las Vegas and implemented a “friends fly free” program, which became enormously popular among the air traveling public, and elevated Southwest to the number one carrier in flight frequency and passenger volume serving the Las Vegas market. All passengers needed was a little “LUV” and they would fill Southwest flights to Sin City.

These stories and more can be found in my book, Landing in Las Vegas: Commercial Aviation and the Making of a Tourist City (University of Nevada Press, May 2012), showing how commercial aviation made Las Vegas the world-class tourist destination it is today.** While tourism and gambling played a major role in Las Vegas’s growth and development, so did commercial aviation. Collectively, the airlines and airport had a direct and indirect economic impact of $35 billion on the southern Nevada economy--more than the gambling, tourism, and mining industries combined. In the book’s third chapter and later ones, Southwest Airlines becomes increasingly prominent as a vessel transporting the city’s lifeblood: tourists and gamblers. Landing in Las Vegas is the first book of its kind to explore and explain the historic significance of the airline industry in Las Vegas, situated more broadly within the American West. It shows what happened when LUV came to Sin City.

**Please note that all book author royalties will be donated to the local Las Vegas House of the Ronald McDonald Charities—an organization close to the hearts of Southwest Airlines Employees. 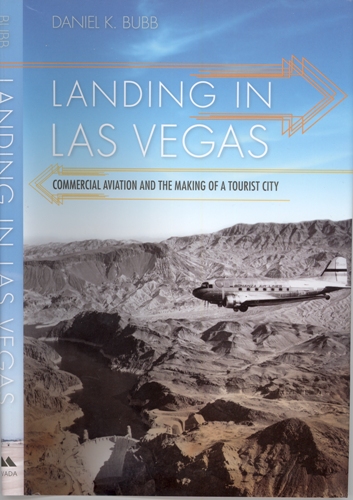