Lord Of The Dance (Video)

“Life isn’t always the party we hoped for, but while were here, we might as well dance.” –Judson Laipply

Certainly words to live by—or at least to dance by. This episode of Red Belly Radio features an interview with Judson Laipply, the motivational speaker who created the History of Dance video which has become THE most watched video on YouTube ever!

I am of course talking about viral video, specifically YouTube—the undisputed king of online-video distribution. Viral video is a relatively new term, given to videos that capture the imagination of people and gain mass popularity. Not unlike a computer virus spreading across the world through Internet sharing. Emails, blogging, IMing, etc. are all much faster than word of mouth—faster than actual viruses for that matter.

A lot of people have seen Jud’s video. How many? Well let’s put this in to perspective.

One of my favorite viral videos is Numa Numa—this video features a fellow who has now become known as the “Numa Numa guy” (I’m sure he has a real name but it never comes up in the video) lip-syncing to a disco song. It’s has been watched almost 20 million times and probably sold a lot of copies of Numa Numa (the actual name of the song is Hai Ai Hee (Dragonstea Din Tei)) released by Moldovan pop group, O-Zona, in 2004. A huge club hit across Europe, originally recorded in Romanian, and covered several times including in a recent release in English by Romanian model Alina Puscau.

Perhaps my favorite “serious” music video is the band OK Go performing Here It Goes Again. One camera doing one shot, using tarps as a backdrop (you can see the folds) and six treadmills. The band performs while jumping, dancing and moving on the belts. Did I mention the treadmills are running? I don’t know how many tries it took the band to get it right, but the band had to do it right all the way through with no mistakes because there are no edits. It is really neat idea and the proof is almost 40 million views. 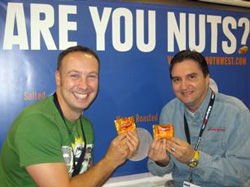 The Evolution of Dance video has been viewed more than 100 million times on YouTube and probably another 10 million from other video hosting sites. You may know him as “The Evolution of Dance Guy” (I know I did) but Judson Laipply came into our booth at the recent BlogWorld Expo and I got to talk to him about his most-viewed video and future projects.

I have no idea what kind of motivational speaking career Judson had before EOD, but this video has made him an international star. He just came back from an event in Belgium with Formula One race car drivers—who are veritable rock stars in Europe—where he performed his now-famous moves.

All three of the above videos have spinoffs of them, proving that social media influences pop culture. At least one spinoff of EOD features a newly-wed couple at their reception dancing their first dance in Judson-style. Very funny.

Coming in slightly behind Judson is the newest video by blog-o-spondent Kaci Beeler. Kaci was the winner of the month-long contest held by blogSouthwest.com that ended with a video shoot and real reality show at BlogWorld.  Kaci’s training in improvisational comedy comes through in this funny look at Las Vegas. Check it out but also check out this episode of Red Belly Radio.

Photos from top to bottom: the Numa Numa guy (real name Gary Brolsma), Judson with me at BlogWorld with peanuts, and Kaci Beeler (right) from her winning Blog-O-spondent video.

Jenni_Chasteen
Not applicable
Kaci's video is super fun! Her delivery is priceless... "I found many small replicas of the tiger..." LOL!
6 Loves

Mitch
Not applicable
That was a great interview.
8 Loves