Surprise and Delight in Nashville: It Mattered

This is a guest post from Southwest Customer Pamela McClure, whose simple “ask” of a Southwest Employee made the surprise of a lifetime a reality for her children. I had spent months planning a surprise trip to Walt Disney World for my family.  It would be my kids’ first time to the Magic Kingdom.  They were going to freak out when they found out they were missing a few days of school to ride roller coasters (and celebrate, with my business partner’s family, our 15th year of business!).  I’d booked a Southwest Vacation package, so the flights, hotel, and meal plan were in the bag.  I just needed the perfect, unforgettable, splashy unveiling plan. I was brainstorming with family over Thanksgiving, about six weeks from the big trip, but the right big idea was eluding us.  We wanted something splashy, something to stop traffic.  On my flight home I noticed a Southwest ad: If it matters to you, it matters to us.  Now I had a big idea.  The minute I deplaned in Nashville, I headed to the Southwest ticket counter and told Customer Service Supervisor Sheri Donnelly that I wanted to unveil the surprise right there at the Southwest ticket counter –but I needed her help.  It was disruptive and silly, so I crossed my fingers.  Sheri was all in!  She gave me her cell phone number so we could arrange the details. 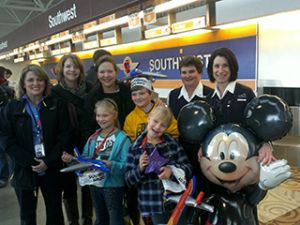 The big day finally arrived—could we keep this secret from my kids for a few more hours?  My mom and I picked up the kids from school a bit early that Wednesday, since I told them they could go with me to drop their grandmother at the airport.  Little did they know that my friend Liz was already dropping off their packed bags, a life-size Mickey Mouse balloon and other goodies at the Southwest ticket counter. We got to the airport and walked my mom to the Southwest area where Sheri Donnelly had her Team on cue.  She routed us to Jenny’s kiosk to check my mom’s bags (to Orlando, secretly!).  Then Jenny turned to the kids, “So are you looking forward to your trip?”  They were confused.  “We’re not going anywhere!”  Jenny smiled and asked, “Then why are your bags here?”  My three kids were stunned when their bags suddenly appeared (monogrammed, so they were definitely ours!). Then the Southwest Team brought out the life-size Mickey Mouse and the gift boxes that completed the unveiling.  My kids were in shock as they opened boxes bearing Disney T-shirts, and I announced, “We’re all going to Disney World RIGHT NOW!”  Southwest Customers applauded, and the Southwest Team topped it all off with inflatable airplane hats for the kids.  My friend Liz caught the whole unveiling on video, so we’ve relived the moment many times over the last few weeks! Sheri and her Southwest cohorts made my day—made my kids’ year—and will forever be in our memories of that spectacular trip!  If a company ever delivered on its advertising promise, Southwest Airlines did on that cold January afternoon: What mattered to me, mattered to Southwest! 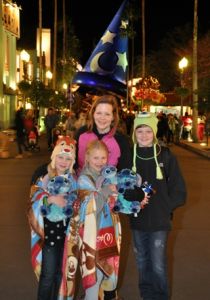