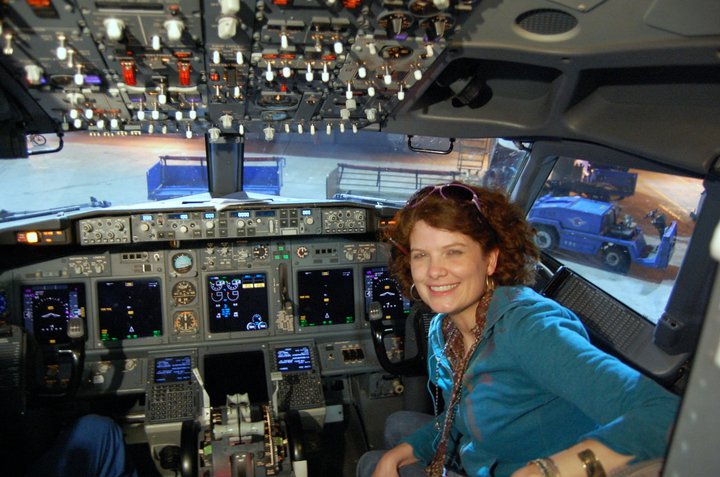 Re: Welcome to My Life, Tattoo

by sbickle |
Not applicable
in Blog
10 Loves
10 Loves
Love this, and LUV these folks. I know for a fact they represent the best about SWA ...and you notice they're all MX, right? 😉 ... View more

Re: Heroes in the Hangar

by sbickle |
Not applicable
in Blog
277 Loves
277 Loves
You know, I am not familiar with that situation and I can't speak for what the flight attendant thought. But I can say that there is always more to a story like that than gets reported, so rushing to judgement seems unwise. What I am confident about is that every day, our flight attendants make our band one of the most recognized and respected Customer Service organizations in the world. I like to think that no matter what happened in that specific situation, our People are doing the right thing again and again in ways that might not always be reported but that will be remembered. ... View more

Heroes in the Hangar

by sbickle |
Not applicable
in Blog
557 Loves
557 Loves
Some of you know that February is Black History month, and probably slightly fewer of you know that March is Women’s History Month.  I’ll be honest, I had to double check both of those with Wikipedia. Here in Southwest Maintenance and Engineering, it’s easy to forget which culture we’re supposed to be celebrating each month.  Not because we’re insensitive or unfocused on diversity—quite the opposite.  It’s just that we are a bunch of aviation geeks here in the garage.  Aviation history is just one of the many things that our mechanical minds want to get to the bottom of. Well, it’s probably also easy to forget because let’s face it: this is Southwest. We’re always celebrating.  I actually discovered the Tuskegee Airmen at their annual celebration and hangar tour.  I watched as our Mechanics wheeled in elderly African American men wearing bright red jackets in January.  The Mechanics showed off the giant “birds” and leaned over to hear the older men’s stories.  Eager young women and men watched attentively as Mechanic Robert Williams explained about our engines or pointed out that the “black box” is actually orange.  Proud parents and teachers took pictures as the group toured the hangar. I asked Mechanic Gordon Guillory about the event.  He’s the president of our local chapter of Tuskegee Airmen, and he explained that this tour was an award that the students had won by writing essays.  The gentlemen in the red jackets were pioneering World War II veterans called the Tuskegee Airmen.  Serving in a segregated unit, these airmen, ground crews, and mechanics ferried B-17 Bombers and reconnaissance planes into battle.  Their accomplishments were overlooked at the time, and when they returned to civilian life, the doors to a career in aviation were often closed. Today, Tuskegee Airmen chapters honor the remaining original Airmen, and they focus on educating young people about opportunities in aviation. Gordon was inspired by the example of these “greatest generation” heroes not long into his own career. “There were so few of us African Americans in aviation,” said Gordon, “so when I heard something about World War II guys who’d been pilots, I started researching. There was no internet then; I had to go to the library.” The other place Gordon went was to his Coworkers.  Maintenance Warranty Specialist Donna Dillon knew just how to get Gordon on the right path to interacting with his aviation history heroes.  She had already been learning about and working with World War II Women Air Service Pilots.  No one in the office was more excited when the WASP won their Congressional Medal in 2009 than Donna...but a lot of us were really excited! That’s the thing about the LUV we share here in Maintenance.  It’s infectious. We all have the aviation bug and we want to share it—with each other, with the next generation of aviators, and with the past.  I’m proud to be at a place where history doesn’t need a placeholder—it’s honored and celebrated all the time. ... View more

Workin' at the Plane Wash

by sbickle |
Not applicable
in Blog
369 Loves
369 Loves
On Fridays, the car wash in my neighborhood is always full of young men getting their cars date-ready.  Here at Southwest, we are the LUV airline, but impressing the ladies isn’t the only thing on our minds when we wash our planes. To get an airplane ready for a wash, Appearance Technicians pull on their big water-repellant suits and drag out the hoses.  Mechanics position the airplane and the Appearance Techs begin to cover up its most sensitive parts.  Just getting set up for the wash takes longer than it takes me to wash my car…of course, I don’t get my car very clean.  Once the plane is in position, the jets shoot water two stories in the air.  The Appearance Techs begin scrubbing with giant brushes on the ground and up on the crane. Every inch of the plane is carefully de-crud-ified, but we have to pay particular attention to the plane’s red bellies.  That’s because hydraulic fluid from the landing gear runs back across the bottom of the plane.  Getting the fluid off of the plane takes special kinds of soap and a ton of elbow grease. Why do we dedicate hours of Maintenance time to wash each airplane?  It’s not all about our good looks.  Having a clean airplane means that inspections are accurate.  Mechanics and their Quality Control counterparts, Inspectors, need to see every square inch of the airplane so they can ensure that it’s being properly maintained.  But don’t be fooled, all this Maintenance cooperation is totally aimed at impressing you, too. ... View more

Mechanics Create Whale of a Playhouse for Kids in ...

by sbickle |
Not applicable
in Blog
284 Loves
284 Loves
In Dallas' NorthPark Center, a village has appeared.  Quirky houses, clearly made for small folks and decorated to beat the band, turn up each year to draw smiles and looks of wonder. The playhouses on display for CASA’s fundraiser offer plenty of “ooh” and “aww” moments... but please don’t hold it against me if I insist that the playhouse SWA Mechanics built is the coolest one. It’s a killer whale – what’s cooler than that?  My Coworkers’ playhouse is based on Southwest’s first specialty aircraft, Shamu One.  The playhouse has a nose that extends onto landing gear, sheet metal painted like the killer whale, and realistic-looking avionics with plenty of buttons and switches for little hands. The other thing I love about the playhouse is the way it shows off the classic SWA Mechanic personality. In my mind, at least, they’re a very detail-oriented, very soft-hearted group, and they LUV to win. It didn’t surprise me to hear Dallas Mechanic Dale Dixon say of the volunteers, “Kids were a big trigger for everybody. We’re not touchy-feely, mechanics, we’re not speaking about it, but all you have to say is ‘kids’ and we’re in.” When our Mechanics heard about the event that raises money for CASA, they were immediately interested.  CASA’s volunteers are appointed by judges to advocate for the best interests of abused and neglected children in protective care, and the playhouses are raffled off to raise money for their efforts.  Now for the competitive part: David Mount in Southwest Communications says, “Last year’s house was great, and everyone liked it a lot.  I knew once the guys saw all the creativity that had gone into the other entries, though, that they’d come back with something over the top this year, given how competitive they are.”  Over the top it is.  Last year’s structure was less complex. This year, the volunteers were recruited out of Maintenance’s “special teams” like Sheet Metal Shops (for the roof) and Appearance (for the interior details like carpet, seats, and glow-in-the-dark strips).  Dale says the whole hangar got excited, “People kept coming by while we were working and recommending ‘You should do this!’ We got great suggestions from a lot of people, a lot of collective support.” Kids and grown-ups alike appreciate the details. NorthPark chose to put the house in one of the most coveted spots in the show, and CASA Executive Director Beverly Levy says that when she overhears visitors talking, “It’s ‘Shamu!’ ‘Shamu!’ everywhere I go!” Last year, the playhouses raised over $120,000 and lots of awareness for CASA, and we in Maintenance are proud to support that effort.  Be sure to get out there and see the Mechanics’ handiwork (and bid!), and click here to learn about CASA’s unique and valuable mission. ... View more

Re: Oshkosh AirVenture Plane of the Day: Boeing B-...

by sbickle |
Not applicable
in Blog
8 Loves
8 Loves
Yay, Millie! Totally my heroine! And so happy to have been around to play along. ... View more

Re: A Case of the Hiccups

by sbickle |
Not applicable
in Blog
228 Loves
228 Loves
hilarious. Our Customers crack me up. ... View more

Re: A Mechanical Symphony

by sbickle |
Not applicable
in Blog
132 Loves
132 Loves
On April 15, Maintenance’s Don Hammer received the highest award that the Federal Aviation Administration (FAA) has to offer to Mechanics, the Charles Taylor Master Mechanic Award.  The award honors Don’s 30 years as a licensed Aviation Maintenance Technician (AMT) and his fifty years in the aviation industry.  President Emeritus Colleen Barrett, Executive Vice President Operations Mike Van de Ven, dignitaries from the FAA, Aircraft Mechanics Fraternal Association (AMFA), and his proud family and friends joined him for this special celebration.    At the ceremony, Don spoke about how he managed to fit more than 50 years of work into his life.  “It’s easy,” he said, “I just joined the service fresh out of school.  They taught me how to fix airplanes, and I kept doing it.”  Don’s Warrior Spirit and commitment to excellence is reminiscent of the award’s namesake, Charles “Charlie” Taylor.    Charlie was the mechanic in Orville and Wilbur Wright’s bicycle shop in 1903, that pivotal year when the Wright brothers rode out of their bicycle shop and into the sky.  He solved a technical problem that had plagued all would-be-aviators before the Wrights—the problem of getting enough power without weighing down the aircraft.  After Kitty Hawk, he served as the Wrights’ machinist and mechanic throughout their lives.  He was also purported to be a darn good bicycle mechanic. Charlie remained a mechanic for almost 60 years, committed to aviation and to the legacy of the Wrights.  Southwest Maintenance sees that same Servant’s Heart in Don Hammer, and we salute his tribute to the profession he shares with this American hero. ... View more

Re: SOMETHING WE REALLY WANT YOUR “FEED” BACK ON

by sbickle |
Not applicable
in Blog
8 Loves
8 Loves
I wouldn't mind, on flights longer than 90 minutes, paying for a lunch kit (like the tasty "Fresh Express" sandwhiches I buy from 7-11 ...whole wheat, havarti, crisp lettuce, perky turkey). But charging for water or soda is so ridiculous. If my dentist's office can toss a bottle of water at me in the waiting room, I think SWA should be able to tack $.50 onto my ticket before I pay for it on the assumption that I'll need to rehydrate and can't go find a water fountain. ... View more