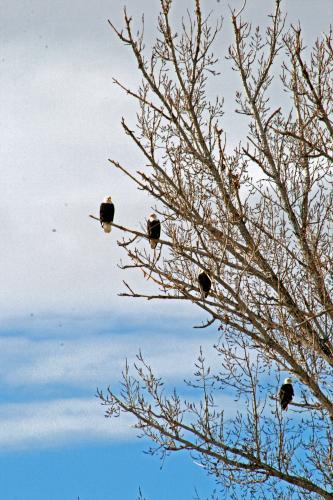 by runb4wind |
Not applicable
in Blog
133 Loves
133 Loves
Brian - Looking at your picture, I remember you when you worked for Delta at Oakland. I was one of the semi-regular passengers on Delta, flying fairly frequently to Salt Lake City (until I found out about Morris Air!!!). I remember Ralph Hill, the station manager, who came over to Delta from Western Airlines (I flew on one of the last Western branded flights from OAK - SLC after DL bought them out). You guys were a GREAT crew, and always took care of us, even when flights were delayed or cancelled. My first flight out of Oakland was when I was very young, on Hughes Air West, on one of their turboprops up to Eureka, CA. It was fun to see the jack rabbits beside the runways in those days, although I understand they were a bit of a FOD problem! I had a bunch of later flights, too, including a few on World Airways to and from Viet Nam. I remember those times with mixed feelings, but am proud to be one of the more early semi-regular passengers to and from OAK. It is fun to see all of the changes, especially the great ones that Southwest has brought to the airport! ... View more

by runb4wind |
Not applicable
in Blog
10 Loves
10 Loves
Great story. Interestingly, the old seaplane ramps remained at NAS Alameda through base closure (very near the old Air Terminal) and are probably still there, today. Also, next time you are in San Francisco, if you have time, head toward the Golden Gate Bridge, and visit the Palace of Fine Arts, a "leftover" of the 1915 Panama Pacific Exhibition. The Marina Green, the super long lawn area between the boat harbor and the houses along the Marina Green is actually the site of the first airmail airport for San Francisco (see the plaque in the middle of the field). There's LOTS of aviation history around San Francisco, and I'm glad that Southwest is now providing service there, to help tie Southwest to the City. Oh yes, I've just got to add GO GIANTS! in the 2010 World Series!!! ... View more

Re: More From Media Day

by runb4wind |
Not applicable
in Blog
12 Loves
12 Loves
Question: Air Tran has some connecting flights that operate on Sky West. Are you going to continue these, but under the Southwest umbrella? Hopefully, this is something to come - would be nice to get some competition into some smaller airports, like Twin Falls, ID. ... View more

Re: The Rest Of The Story

by runb4wind |
Not applicable
in Blog
4 Loves
4 Loves
This is why I'm PROUD to be both a passenger AND a shareholder of Southwest! Be inquisitive.  As long as you are learning, you are alive. ... View more

by runb4wind |
Not applicable
in Blog
4 Loves
4 Loves
I'm an "A List" passenger on Southwest. I'm also somewhat allergic to cats - if I get a bunch of dander, my eyes swell shut and I have trouble breathing. However, I support the new P.A.W.S initiative. Why? SImply because I've already been on Southwest flights with pets - pets that the owners have smuggled on in their carry-on luggage, and I've survived just fine. Yes, I carry allergy medications with me. And, for the people who complain that Benadryl makes them drowsy, there ARE other medications that don't make you drowsy. Ask your doctor for a prescription. As a frequent flier, and a stockholder, I feel that the $25 charge for UMs is entirely reasonable. I want to emphasize that he great majority of UMs are the best children to be around on the plane - they're well-behaved, and, unlike other children, know to not kick the seats, etc. However, processing and handling them (I know, that sounds like a food processing plant) takes up extra time and attention of Southwest's employees, especially the CSRs on the ground. This is especially true when there is any sort of an irregular operation of a flight, especially at an intermediate stop, or when the receiving adult fails to show at the gate on time. While not every child, every flight, or every adult is responsible for causing this, the fee spreads the cost out equally and fairly. I just looked at several other airlines' web sites, and Southwest's $25 fee is VERY reasonable when compared to the other airlines' $100 fees (in each direction!). It will be interesting to see how the P.A.W.S program and the changes to the UM program play out. I suspect that, just like the (excellent!) changes Southwest made to its boarding procedures over the past year, we'll all find that they work out to almost everyone's benefit. Be inquisitive.  As long as you are learning, you are alive. ... View more

Re: A Sharp Dressed Man

by runb4wind |
Not applicable
in Blog
8 Loves
8 Loves
GREAT costumes. I had a super flight today (1682 LAX - SLC) with a super crew. I wish there had been more Halloween stuff around, but I understand with the need for security, etc. Keep up the EXCELLENT work. It was a special flight - there was an American Airlnes pilot on his final deadhead flight, retiring today. Turns out he served with the same squadron as me in the Antarctic in the 1970s - what a small world! Southwest DEFINITELY helps keep everybody in touch with their history! ... View more

Re: We Take Safety Seriously

by runb4wind |
Not applicable
in Blog
3 Loves
3 Loves
It is interesting to see how this situation is being played. First, the problem was reported by SOUTHWEST, not the FAA (why didn't the FAA inspectors find the "missed" inspections in one of their other inspections?). Why, then, is the FAA going to the press with lurid reports of "unairworthy" aircraft being allowed to fly? Is there, prehaps, some grandstanding going on by the FAA, trying to divert attention from some of their own shortcomings, notably in the air traffic control (ATC) system, where, for example, a trainee air traffic controller caused a dangerous situation that had the potential for a mid-air collision a couple of days ago? Will the FAA issue a "fine" against itself for this, and generate as many press releases? Or, perhaps, is the FAA trying to either get its budget increased or to increase its financial flow by levying the "fine"? Yes, Southwest has some planes that are not freshly off the dealer floor. However, they're a lot newer than some of the stuff that other airlines are flying around. I have been on a couple of flights where mechanical problems have developed. In each case, Southwest stopped and took actions to make sure that the plane was safe and got the repairs needed before it went on further trips. Sometimes that meant that we had to offload and change aircraft, delaying us. That disrupts crew schedules, crew times, and passenger schedules, but they did not hesitate to do so in the name of safety. I really wonder if the people who are protesting so loudly take as much care in the maintenance of their personal cars? Before any of us jump to judgement, let's wait to see how this plays out on the FAA hearing process. I suspect we may want to wait until the entire hearing process is completed - I suspect we will find that the enormous fine is quietly dropped either partially or almost completely. I doubt, however, that if this happens, the news "reporters" who put out the hysterical, lurid, screaming headlines about the fines will issue corrections - after all, that kind of thing doesn't make news ratings! And, yes, I'm still flying on Southwest, with complete confidence in them. ... View more

Re: Bringing in the Fourth

by runb4wind |
Not applicable
in Blog
10 Loves
10 Loves
For the first time in several years, I was at home for the 4th - what a GREAT feeling of INDEPENDENCE and FREEDOM that was. Much as I enjoy commuting on Southwest between Idaho and Northern California, being at home and able to relax was fantastic. In the evening, I went out on San Francisco Bay in a sailboat - and had a unique and stirring view of the fireworks. Hopefully, that will be something Southwest can publicize in the future - a SUPER way to spend the 4th of July in San Francisco (and we didn't have fog, either!!!). I LUV that you're serving all three Bay Area airports again - it gives me lots more choices and ways to LUV Southwest. ... View more