After a few years working as a fueler for a contract company at OMA, I finally decided to put in for a position at Southwest Airlines in 2000.  While fueling flights for the different airlines, I got the chance to see how each company operates, and it was very apparent that the Southwest guys and gals had it down to a science.  I had to get started as soon as the flight arrived; if I didn’t, everyone would be waiting on me.  When offered the job, it was a great feeling to start a career with the best airline in town.

A quick six months into the job, I (along with every other SWA employee) received a letter in the mail from then-President and CEO Herb Kelleher.  It was a letter which had such an impact on me that I have held it in the back of my mind ever since.  In this letter, which reviewed the year 2000 and outlined expectations for 2001, Herb made an example of Eastern Airlines, a once-proud industry leader which had already collapsed years prior.  He mentioned how Eastern Airlines employees began to care less about the well-being of their customers and grew increasingly self-centered.  In closing his letter, Herb said, “Never, ever, ever, ever, ever let the Eastern tragedy happen to Southwest – and to each of us who are a part of it!”  I was taken aback by such candor from the CEO of my new Company!  His pride and his passion were enough of a call-to-arms to keep me in lockstep today. 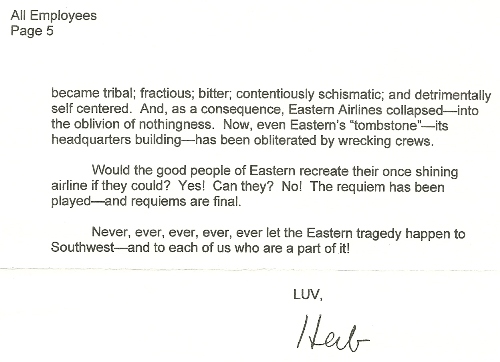 As my experiences continued, I began to contemplate helping to open a brand new station, and in 2005 I made the brash decision to move to Pittsburgh, PA.  I had never even visited the city when I signed my name on the internal bid.  Sure enough, I got the call and off I went in search of a place to live!  It was a great experience to be there for the first aircraft as it arrived the day before the station opening; just the feeling of, “We’re here”.  My favorite memories include the water cannons over the aircraft, the pictures on the front page of the newspaper, and the anticipation from all of our new Customers who were all just as excited that there was a “new kid in town”.  It truly was a great experience to open a new station.  It’s great to put that human face on the Southwest Airlines name and not only meet but exceed another’s expectations. 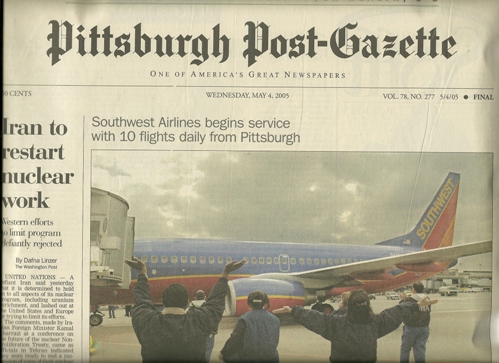 Shortly after the opening of PIT, I had an opportunity to apply for a Supervisor position.  I had been on the Ramp for about five and a half years at this point and I was ready to take on a little bit of additional responsibility.  I was offered a position, quickly accepted, and it was “off to the races” as I learned how to wear the myriad different hats that a Supervisor needs wear.  As a new Supervisor in training, it was fun to make progress on my latest step in a career that, with all of the opportunities one has at Southwest Airlines, had (and still has) yet to hit its peak. 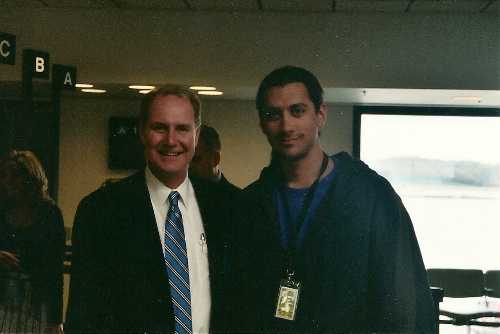 About a year into my experience as a Supervisor, it was asked of me if I could assist with Station Training.  I liked the idea of being that welcoming face during the first few days of a new-hire’s experience, and I could help to ensure that policies and procedures are understood each year when recurrent training comes around.  We all know how to do our jobs, but it takes a different level of understanding to be able to teach it to another. 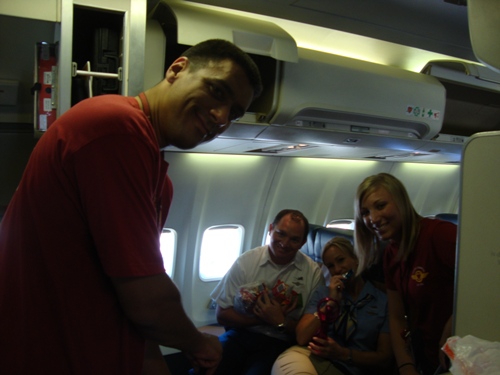 Not long after I began training, I had the opportunity to be a part of the Companywide Culture Committee.  Members of the CCC volunteer their time to help put on appreciation lunches for our fellow Coworkers, Customer Appreciation Days at certain airports, and help put on the celebrations for milestone anniversaries, among other things.  It is quite rewarding to surprise a Flight Attendant crew with snacks and an opportunity to relax while we clean the aircraft during a turn, or to cook burgers and mingle with a work group that may not always get recognized.

With ten and a half years at SWA, it feels like this is all that I know.  In many ways, my story has just begun.  Keep in mind, as we celebrate 40 years of an airline which has yet to hit its peak, that we can never, ever, ever, ever, ever let the Eastern tragedy happen to Southwest – and to each us who are a part of it!  The history of the next 40 years of Southwest Airlines will surely be written and each of us holds the pen in our hand.