A Test of Warrior Spirit

Southwest Airlines has always held a special place in my heart. Partially because growing up my family flew them whenever possible, and partially because the idea for the airline was conceived in my hometown of San Antonio. (Major brownie points.)

It's no surprise then that from the moment I heard about the Campus Reach internship, I was intrigued. It was my first true trip to Dallas and I was visiting a friend that I had previously interned with at a giant fairytale world in Orlando (you know the one). I got to talking and her mother and started sharing what it was like working as a Flight Attendant for Southwest Airlines. I was fascinated to learn the logistics of what it takes to run an airline. Sensing my interest, she informed me about the Campus Reach internship and encouraged me to apply. I hear the details and I was sold. Hands on experience, a great work environment, and flight benefits, who would pass that up?

Apparently nobody. In applying I discovered that Southwest receives upwards of 15,000 applications every cycle (spring, summer, and fall) for roughly 100 positions. With an acceptance rate of less than 1 percent many websites touted that the internship is "harder than Harvard."

Unperturbed, I boldly applied for nearly 30 different positions and waited optimistically. It wasn't long before the rejections began to roll in. My inbox flooded with emails, none of which delivered the news I was hoping for. I crossed each rejection off my list as they until finally, none were left.

I was disappointed, but not disheartened. I focused on school, brushed up my resume, and patiently waited for the next round of applications to open.

The day they did I applied in a frenzy and nervously waited. Rejections began rolling in one by one until... nothing. By this time my inbox contained nearly 50 rejection emails.

I began feeling disheartened. I truly felt that I was the type of candidate they were looking for but I just couldn't seem to get past the first round of applications.

Another semester came and went. I was fortunate to land an internship in San Antonio and focused my efforts on work and school while frequently tweaking my resume.

The next round of applications opened and I applied again. I had nothing to lose and another semester's experience under my belt. This company meant so much to me, and I knew that perseverance and patience were key.

By this time it was my third round of applications. I had been applying for nearly a year and was wondering if I would ever get the chance to work for Southwest. The spring semester came and went with more rejections than I can count.

It was okay, I knew I'd have another few chances to apply. Besides, by this time it was early May and I was preparing to go to Spain with my school.

I took off for Spain for a few incredible weeks. On our last night in Barcelona as we were sitting seaside enjoying a farewell dinner my phone rang with a call from a number I didn't recognize.

I've always been taught not to answer calls from unknown numbers and given that international calls were very expensive, I didn't answer.

A message was left from Southwest Airlines and I immediately called back. What's $1 a minute when you've been waiting countless minutes for this moment? A friendly voice answered on the other end and informed me that they wanted to set up a phone interview.

I was ecstatic. I didn't even know that I was still in the running for any of the positions. My spirit refreshed, I enjoyed the rest of the evening and went to work researching once I returned to the states.

I found out that I was up for a Corporate Sales internship so I learned as much as I could about the role. It sounded like a lot of fun and I had the experience that the job description required.

A few weeks later my phone interview happened. I was so in the moment that I  truthfully don't remember too much about it, but I knew it went well and the recruiter told me they wanted to fly me up for an in person interview.

By this point I knew I was getting close. I spent many more hours gathering reference letters, doing more research, and preparing myself to interview.

That date came on a Friday in mid July. I flew to Dallas and interviewed at headquarters with a panel of four. I was nervous, but felt good overall. I knew that no matter what happened I'd apply again with a renewed zeal, knowing that I had grown and made progress in the interview process.

I waited all weekend until Monday came around, hoping for a call. Nothing. I knew I'd know soon and would have to be patient just a little bit longer, but each day felt longer than the last. Finally on Wednesday (while in an airport of all places) I received the call.

They wanted to offer me the position! I remember gripping my phone and happily saying yes over and over, as if the recruiter might think that only one yes actually meant no. I teared up for the first time in recent memory and the rest, as they say, is history.

The internship was a fantastic experience. I had high expectations and they were by far exceeded. I learned so much and was able to make a real contribution to the company. There's no company with a work culture quite like Southwest. 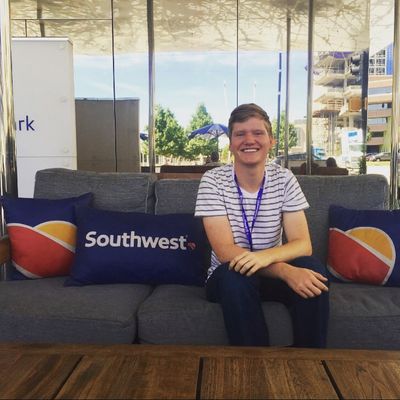 Relaxing on the Southwest Porch at Klyde Warren Park in Downtown Dallas.

I write this now, nearly several weeks after my last day, knowing that there are likely others out there who are in the situation that I previously faced.

Remember that a no is not a no forever, just for now. Take it in stride and use the extra time to grow and progress.

Looking back, I'm happy that I had to go through a few cycles of "no." It kept me humble, allowed me to gain additional skills, and showed how much I truly did want the internship.

May your Warrior Spirit stay strong, and may you find a semester full of peanuts and LUV real soon.

Thank you so much for sharing your story with us, to keep our expectations real, in case of a disappointing outcome. It shows great compassion for others. Your encouragement to keep moving forward also speaks volumes about you. You have a caring heart, in synch with the Spirit and work culture of the company.

I a very fullfilling career, and many great adventures to come!!

Your story is inspirational and ageless. As an entrepreneur and seasoned professional, my greatest joys and sense of pride came from my choices and lessons learned from a lifetime of hearing NO! I never thought of no as a rejection, only as a reflection of circumstances and an opportunity to grow.

Your story is the story of life with the ups and downs we all deal with. Some cope better than others, and that's okay. Each experience provides each of us a point of reference that we grow from, and this leads to wisdom and understanding.

I'm happy for you.

I'm pretty speechless after reading that, which would shock several people.  So inpsiring. Thank you for sharing your story.

So excited for you, 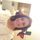 Colton what a wonderful story! Your perseverance truly paid off and most definitely is the PERFECT EXAMPLE of a TRUE Warrior Spirit. I as I'm sure many others are as well, am touched by your story. Let it serve as encouragement to ALL Southwest Airlines "hopefuls,"to never give up on their dreams of joining the number one airline in the industry. Thank you for sharing your story with us and let it serve as a reminder to all of us to "just keep swimming swimming swimming".

Wow! What a heart felt message, tears are rolling. I agree, the luv I've expereinced from SW as a loyal customer and job applicant is warmth, sincerity, encouragement and kindness...you can not buy what Southwest offers..(my saying on every post..lol) SW rocks! Thank-you so much  for your story