"We now have a new Passenger," announced a Flight Attendant on Southwest flight #441 heading from Chicago Midway to Salt Lake City today.

The flight was about 100 miles north of Denver when one of our Customers went into labor.  Thanks to the heroic actions of our Flight Crew as well as the doctors and nurses onboard...a new Customer entered the world while he was 30,000 feet in the air….yes, it was a boy.

The plane diverted and safely landed at Denver International Airport, where medical personnel met the plane.  We’ve heard that the mother and baby are doing well, and we wish them the best.

We'd also like to suggest "T.J. Luv" (Southwest’s lovable mascot) as a possible name for this new little peanut. 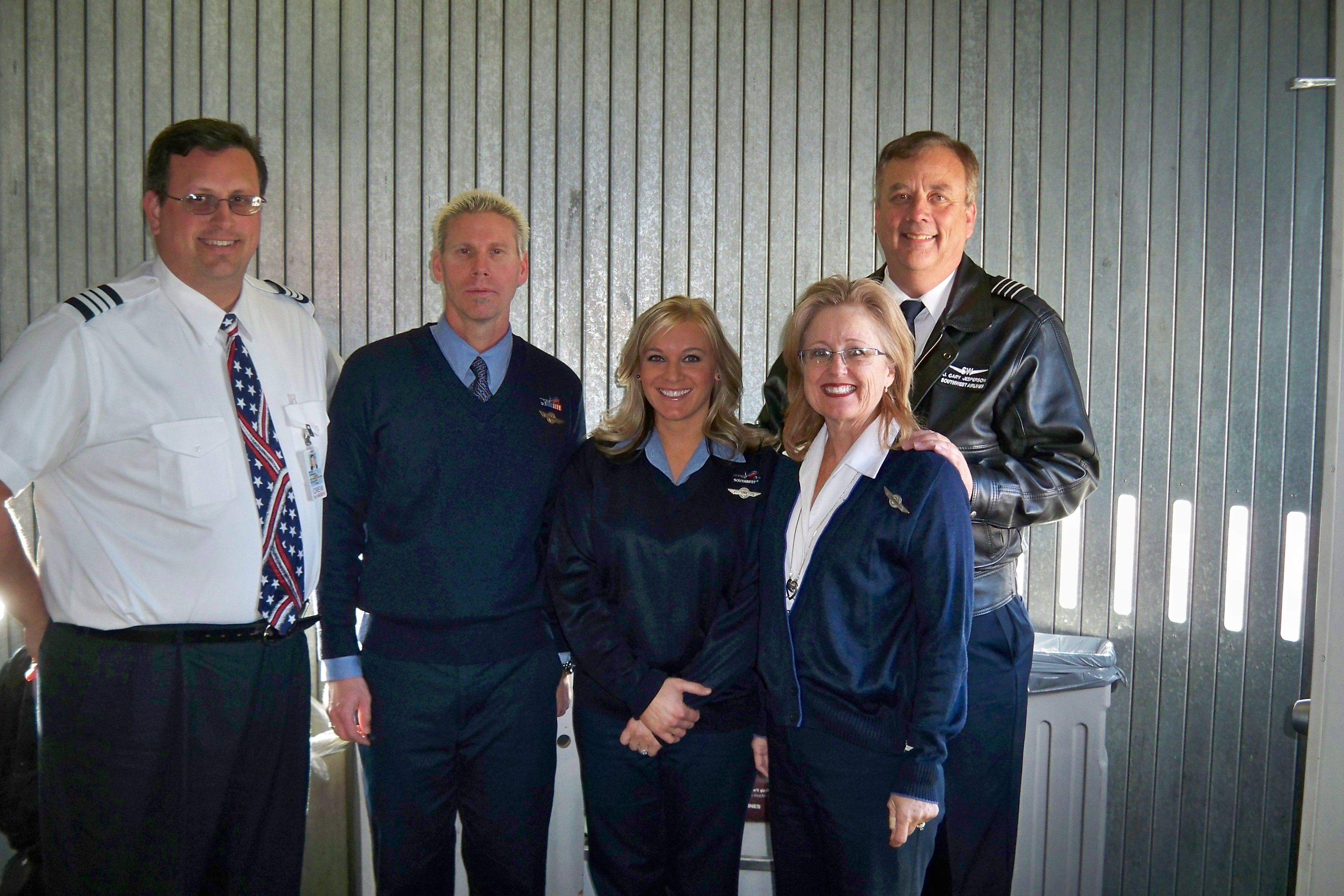 OAK Flight Attendants Lisa Hamm (L) and Sherry Osborne (R) share the story of their “Labor of LUV” with media in Boise this afternoon after delivering a baby onboard Southwest Airlines flight #441 today.

Anonymous1748
Not applicable
A tradition on the Washington State Ferries is if one is born on the boat (which happens from time to time) that you ride free for life. Might be a good PR move by SWA for this little one.....
3 Loves

Anonymous3237
Not applicable
Doesn't Southwest have policies against women that are about to give birth before they board the plane? A lot of airlines do say women more than 7-1/2 months pregnant can not fly. This person is really lucky a doctor was on the plane because it could have been horrible for both mom and baby if a doctor wasn't onboard. The mother isn't too bright being 8 months and 1 week pregnant and flying. The pilot and Southwest's control center did the proper thing by rerouting to Denver so she could get proper medical attention.
3 Loves

Anonymous4237
Not applicable
Will the child qualify for 1 Rapid Rewards Credit?
3 Loves

Bayard
Not applicable
Apparently God still has faith in the human race... AND Southwest Airlines! Congratulations to the family and kudos to the crew!
3 Loves

Anonymous2039
Not applicable
So, did the little tyke earn any SW Rewards points?
4 Loves

Anonymous3201
Not applicable
Precious! Only on Southwest.
3 Loves

MarkyProvoSMF
Not applicable
That is so amazing! What a neat story to be able to tell the little guy when he is old enough to understand. Luv was truly in the air today.
3 Loves

Next
Not applicable
God bless the new flyer! It's on!
4 Loves

Rich_D_
Not applicable
Very happy for the Mom and family and little baby. Congrats!!!! Can't say that for the rest of the passengers. I have to ask...why was she flying at 9 months?
3 Loves

Metallisteve
Not applicable
Wow! So it does happen outside the big screen? This is why I always carry my Fischer-Price doctor's stethoscope in my carry on bag!
4 Loves

Anonymous4193
Not applicable
Congratulations to Mom and Southwest.....it is so good to hear good news......Hope you give some lifetime free round trip tickets to the family !
323 Loves

JohnB8
Not applicable
I think Southwest should give this Special Customer free flights on Southwest for life.
323 Loves

Medical_Student
Not applicable
I really hope irresponsible behavior is not rewarded by offering free flights. They should send them a bill for the extra time and jet fuel required to make an additional stop.
323 Loves

Mother_of_3__in
Not applicable
Obviously this family received its own "Rapid Reward." The reward, the baby, was born rapidly! It was only a 3 and a half hour flight. BTW, Southwest Airlines' employees are not OB/GYN's! If someone tells them they are not due for 3 months, how are they to know otherwise?
323 Loves

Don10
Not applicable
The Chicago Tribune had a nice article about this. The doctor who delivered the baby is from Naperville, Ill., and had not delivered a baby since med school 30 years ago. Three nurses on board also assisted.
327 Loves

FlyingMuse
Not applicable
I wonder... if they clocked the time for this lucky baby... and what will be recorded as his birth location on his birth certificate? He'll want to know this if he ever wants to get an astrological reading. It's fun to think he'll enjoy a lifetime sharing how he was born in an airplane - and not just ANY airplane, but one from Southwest Airlines! 🙂
325 Loves

Dottie_Meyer
Not applicable
Congratulations to the mom, baby boy and the crew of Southwest flight #441. Way to go gang!
324 Loves

doc_s_patient_S
Not applicable
Give the doctor free flights for life (and to me for suggesting it! I have been a patient of the good man since moving to the western 'burbs in 1982.......... And did I mention, Southwest is my #1 airline!)
322 Loves

Normalee_Moreno
Not applicable
Congrats everyone!!! We love Southwest. I flew home to USA from the Dominican Republic in 1960 and was in my 9th month. Had to practically sign my life away! "Course that was not SouthWest. I wish the lucky mother all the happiness our daughter has given us.
324 Loves

Anonymous2667
Not applicable
I'm with the one person with the gumption to say what the heck was that woman thinking, honest to Pete what some people won't do for their 15 minutes of fame! Selfish ? Braindead? Both?
325 Loves