Here at Southwest Airline's Headquarters Campus in Dallas, my Department--Network Planning--is celebrating Earth Day 2010 in a new and exciting way.  You could say that something new is "coming up!" 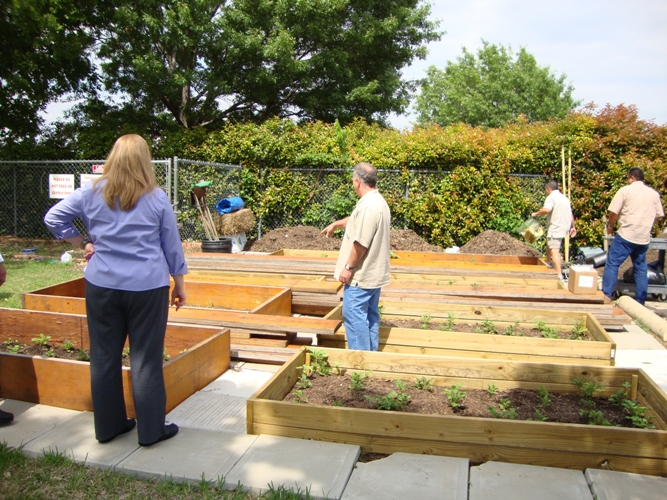 Like potatoes.  And onions.  And soon, tomatoes, peppers, and who knows what else.  Embracing the growing Urban Gardening movement, an ever-increasing number of SWA Employees have turned an otherwise-ignored grassy area between HDQ and Technical Services into the sweetest little garden plot this side of heaven.  Everything is being grown entirely organically, without chemicals or pesticides.  All of the vegetables harvested from this garden will be donated to local Dallas-area food banks.  And the coolest thing (and definitely the most important thing to Gary!) is that this entire project was done without one red cent of SWA's money.  It's a completely volunteer effort, from the labor, to the materials, to the time it took to help the Earth do what it does best--feed us, organically, healthily, and deliciously!

"Jaime's Garden" is the brainchild of my longtime colleague (and friend!) Network Architect Jaime Ibarra.  Jaime has long been an urban gardening pioneer, over the years inundating his Coworkers with the freshest eggs, most flavorful tomatoes, and other fresh produce grown right in his backyard.  However, for a couple of years now he’s wanted to start a garden here on our HDQ campus, and with the help of fellow gardener John Jamotta (Senior Director, Network Planning) they took the first steps in June 2009 by starting to compost in preparation for the first planting in early 2010.  At first, all of the compost was provided by the Network Planning group, using lunch leftovers as well as bringing compost material from home (I haven't stopped up my sink with onion skins or potato peels in over six months!!).

(John and Jaime with the first potatoes harvested)

But here's where the effort becomes collaboration.  Jaime and John thought to see if Eurest, the corporation that operates “The Landing” (our award-winning campus eatery) would donate their organic wastes to the compost pile.  They jumped at the opportunity!  Eurest employees Laura Gigl and Edward Ramirez co-opted their staff and within days were providing more compost material than John or Jaime could have hoped.  And in the few months since the effort started, Eurest has even begun to use cuttings from onions and bell peppers to grow seedlings which are then planted in the garden.

And the collaboration keeps expanding.  There are now over a dozen Employees digging, planting, and keeping Jaime’s Garden growing.  One afternoon after work while they were tending their crops, another Southwest Employee walked over from the Technical Support building and mentioned that his wife was a gardener, and asked if he could tell her about the garden?  “Of course!” they replied.  Little did they know at the time that the Employee’s wife, Lynn Oxendine, is a Master Gardener.  Lynn has put “Team Jaime” in touch with her associates at the Agri-LIFE Extension of the Texas A&M System, and they’re adding an energy that no one involved with this project ever expected.  They’re talking about helping them expand Jaime’s Garden and using it as a teaching opportunity, offering classes to Southwest Employees on how to make the most out of backyard gardens.  There’s even talk about having Jaime and John share their story on local radio!

So soon…Southwest Employees at HDQ will have the opportunity to learn more about urban gardening, the land on which our HDQ Campus sits will have new purpose, and local food banks will have the unusual luxury of fresh, organic vegetables--all thanks to an idea that one Southwest Employee had, and ran with.  Thanks, Jaime, for your Southwest Spirit, and for your “Garden-LUVing Attitude.”  And Happy Earth Day, everyone!

dottiem
Not applicable
Love the pavers. You guys are doing great work. Thanks for posting.
11 Loves

REGINA_LIVERSED
Not applicable
Will there be serivce to and from Kalispell Mt and Boise Id anytime soon?
10 Loves

Jenkins_Family
Not applicable
Thank you, Southwest Airlines Employee's, for all you do in every way to make our world a better place !!! Many thanks, Jenkins Family Virginia Beach
11 Loves