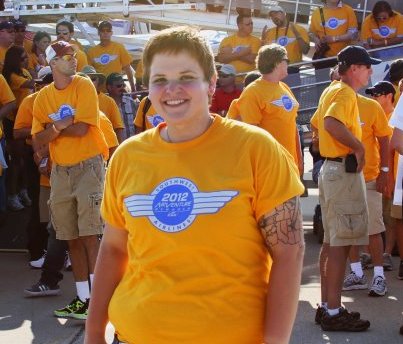 A little over a year ago, I hadn’t yet hired on with Southwest Airlines.  In fact, I wasn’t even an Intern.

My mom was working for Southwest Airlines, and because of her, I had flight benefits.  Since I was a college student with three-day weekends every weekend, I frequently visited friends in other cities.

One weekend, I found myself in the Reno Airport checking in for my flight when I noticed a woman and her young son standing next to the gate podium.  She was on the phone and clearly distressed.  After she got off the phone, I approached her and asked if I could help.  She was flying standby trying to get to San Diego and there was only one option for her—get on my flight to Phoenix and then hopefully catch a flight leaving to San Diego.

The three of us sat together on the plane, and when we landed in Phoenix I escorted them to their gate.  Unfortunately, when we arrived at the gate, the plane had just pushed back.  She wasn’t getting to San Diego that night.

I knew I couldn’t just leave her and her son at the airport. They had no food or blankets, and all of the stores were already closed.  I called my husband (boyfriend, at the time) and explained the situation to him.  He agreed that we couldn’t leave them at the airport and offered to drive them to a hotel so they would have a place to stay for the night.  Before we hung up he asked me, “She’s not an axe murderer, right?”  Surely she couldn’t have gotten an axe through airport security … “Nope,” I replied.

We drove around to every hotel near the airport, and every single hotel was full.  It was the week of Spring Training, and people had flocked from all over the country to Phoenix just to watch some baseball.  After spending over an hour looking for a hotel room, I suggested we give up and let them stay at our apartment.  After all, we had a blow-up mattress and some pillows—it’d sure be better than any of their other options.  After about a minute of talking, we decided they could stay with us.

When we got home, I pulled out the box of Legos from my childhood for her son to play with, and my husband inflated the blow-up mattress.  While I cooked up some dinner, my husband sat and played Legos with her little boy.  It was getting late, and their flight was at 6:00 a.m., so we decided to go to bed

My alarm went off at 5:00 a.m. the next morning, and I took them to the airport. Before they left, we exchanged contact information in case she had any problems with her flights. Later that day, I had a friend request from her on Facebook.  We didn’t speak much after that; she texted me to let me know they made it to San Diego; we exchanged a few “Likes” on Facebook, but nothing more

Jump to the third week of August:  I got a text from her, saying that she got hired on at Southwest and would be at HDQ for her first day of FLY class on the following Monday.  You can imagine my excitement for her!

Monday, August 20, we met up for lunch at The Landing.  After work, I was able to give her and a friend a tour of the engine shop and the hangar.  We finished out the day celebrating at The Deck party.  Cheers to friendships that materialize in unexpected places!  And congratulations, Kristen, on getting hired on with Southwest!

w5pda
Active Member
Bless you for opening your home to someone in need. You are a perfect example of the spirit of Matthew 25:40. Paul In CRP (Who also used to live in RNO)
21 Loves