With airport remodeling underway in Dallas and San Antonio, much of our original airport infrastructure from our origin in 1971 has now met the wrecking ball.  Our original gates/ticket counter/operations at Houston George Bush Intercontinental may still be intact, but I can’t verify that.  However, the original temporary ticketing and gate areas that served as our home when we moved to Houston Hobby are long gone.  Yet, tucked off in a far, almost inaccessible part of Love Field is our original Headquarters and Maintenance campus.  Before we flashback to some historical photos, let’s take a look at our original hangar and headquarters as they look today (above).  This scene is on the northern side of Love Field on Love Field Drive, across Runway 13 Right from our current Headquarters/Maintenance campus.  You are looking at the birthplace of the Southwest story, and it’s pretty amazing that these remnants of aviation’s past are still with us.  But they are, tucked behind a larger and newer hangar.  Southwest’s first hangar is the last building with a rounded roof to the right in the photo.  The exterior door has been modified so it really can’t serve as a hangar anymore, but there is no mistaking the building’s history.  The airport’s original passenger terminal from the 1920s is the building with bay windows just to the right of the fire truck. 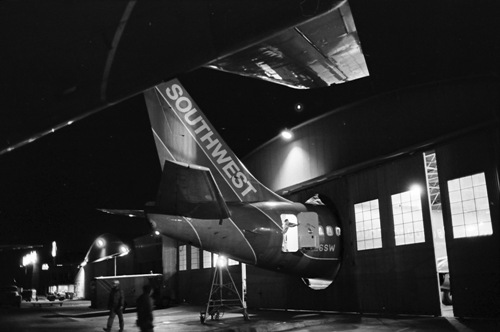 The photo above turns the clock back to Southwest’s early days.  It’s a night photo, and it’s facing all five of these buildings that are seen in the modern photo above from a different direction. Just above the closest walking figure and just beyond the maintenance van is a smaller square building almost hidden in the shadows and beyond that, another Quonset-shaped (semi-circular roof) hangar.  Just beyond that point, the building with all of the bright interior lights is the original 1920’s Love Field passenger terminal.  The former terminal at 3300 Love Field Drive served as our original Headquarters.  In this photo, it appears to have been converted to a FBO (fixed-base operator), which would mean that our Headquarters would have already moved off the airport to its next location on Regal Row.  The larger building all the way to the left of the photo is the one with white doors in the modern photo, and it sits next to the ARFF (Aircraft Rescue Fire Fighting station).  The aircraft in the scene above, Boeing 737-2H4, N26SW, helps us confirm the date of the photo.  Since that aircraft was delivered to Southwest in July 1975, we know the photo has to be from sometime after that, and it could easily be the winter of 1976/77.  Two factors let us know that these photos were taken during the winter.  First off, the hangar door is closed.  Even today, hangars aren’t air conditioned, so the doors come open at the first sign of any warmer weather. 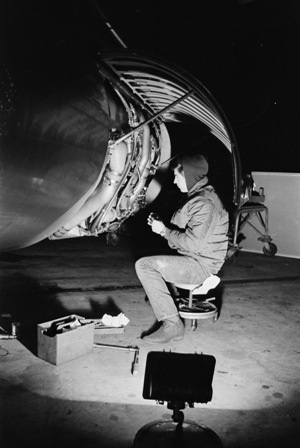 The second clue above is more obvious.  Take a look at how the Mechanic working outside on the engine in the photo above is bundled up.  By the way, you can see the tail of this aircraft at the upper left in the first black and white photo. 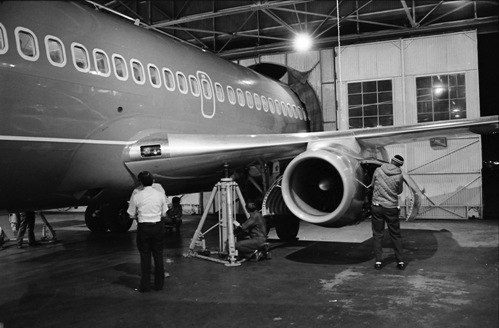 When we walk into the hangar (photo above), we see that N26SW is up on jacks.  This is normally done when Mechanics have to work on the landing gear.  One of the Mechanics is also going to take a look at the engine.  The space between the rubber baffling on the door's cutout and the fuselage gives some doubt about how effectively the baffling seals the door to keep the cold out.  On this night, it doesn’t help that the main hangar door is cracked open at the right edge of the photo.  Since these hangars date from the mid 1920s, it’s hard to imagine all of the different types of aircraft that have been serviced here.

I hope to revisit this area with some early Headquarters photos.  But in the meantime, these historic buildings sit unnoticed and forgotten.  The next time you are on a Southwest flight taxiing to the takeoff end of Runway 13 Right, take a glance over to your right and take a long gander at the spot where the operations of Southwest Airlines began.