Flashback Fridays: A Look at the Interchange Era

I think many folks, including a lot of our Employees, have no idea of what airline regulation used to be like.  The airline world into which Southwest Airlines was born in 1971 was very much different than the industry today.  Our success has been a result of deregulation, but it could be argued that our birth as an intrastate airline was because of the economic regulations enforced by the Civil Aeronautics Board (CAB).  Southwest is a bridge between the CAB legacy carriers and the post-deregulation airlines like AirTran, JetBlue, and America West (now part of US Airways).  Quite simply, if Southwest wanted to fly, it had to remain within Texas because the CAB didn’t authorize any new airlines between the late 1940s and deregulation’s onset in 1978.  What little new service that came about was awarded to airlines based on what the CAB perceived to be need (and politics), not competitive reasons.  The CAB also set price and service levels.  To get around the glacial speed of CAB decision making, airlines came up with a creative way to stretch their reach:  interchange service.

Take a look at this route map from American’s June 1958 timetable.  There is no single-airline service between San Antonio, Houston, Atlanta, New Orleans, or Florida and the West Coast.  Those thin double lines on the map stretching from El Paso to San Antonio and Houston, and from Dallas to New Orleans, Miami, and Atlanta represent interchange service, the answer to the gaps on airline maps. 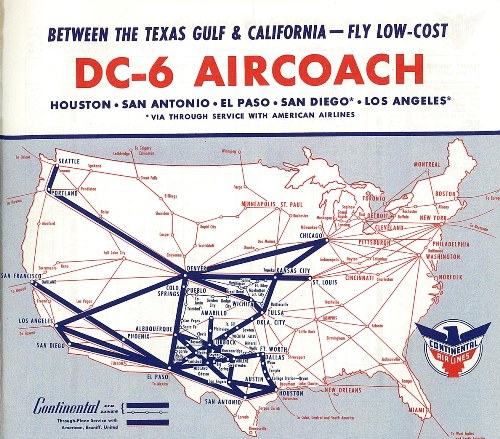 Interchanges are relatives of today’s code shares, but they were different in many ways.  Interchanges were connecting service over a common city—not one flight operating under multiple airline codes like most code shares.  The airlines sold interchange service using interline through fares with flight coupons for both airlines, as if the passenger was changing airplanes and airlines.  However, interchanges used one aircraft to fly the length of the route, so at the connecting (or interchange) point, passengers didn’t have to change airplanes, even though they were changing airlines.  On their individual legs of the route, the member airlines operated flights under their own names with their own flight crews.  (It seems to have been universal practice to assign flight numbers in the 900s to interchanges.)  Passengers got the convenience of not having to change airplanes, and the airlines got a market presence in offline cities where they hoped the CAB would eventually let them serve.  The Continental route map above from a 1956 timetable shows their interchange service with American between Houston and San Antonio over El Paso to San Diego, Phoenix, Los Angeles, and San Francisco by using a thick route line underscored with a thinner line.  (We will talk about the Seattle route on the map in a minute.) 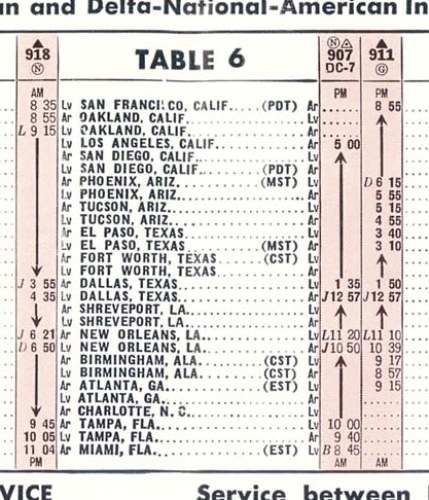 Above, we also see that Delta interchanged from Atlanta and Birmingham to California, via Dallas and American.  Based in large part on the success of these interchanges, the CAB awarded Continental, Delta, and National their own service to California along these routes in the late 1950s.  Interchange partner American was left without any of the new routes.

Another area lacking direct service was the Pacific Northwest.  To fill this void, Braniff and Continental interchanged with United over Denver.  Continental flew the Tulsa to Denver leg via Wichita, and Braniff the Dallas to Denver leg.  There, United took over the airplanes for the continuation to Portland and Seattle (with stops at Salt Lake City or Boise added in or removed over the years).  As the “world’s biggest” airline at the time, the Interchanges with Braniff and Continental were relatively small potatoes, and United pushed them onto the cargo page of their April 1959 timetable.  The CAB awarded direct service on these routes at the dawn of the 70s, with Braniff and Continental shutting out United.

The interesting part of interchanges for airline geeks is that the airlines shared each other’s aircraft.  You might see a Delta DC-7 in Los Angeles or an American DC-7 in Atlanta.  Continental used three DC-6Bs on their interchange with American, and they had their aircraft built to American’s specifications so there were no crew issues with operating another airline’s airplane.  A single Continental DC-6B built to United specs operated the Seattle interchange, and it shared duties with a United DC-6B. 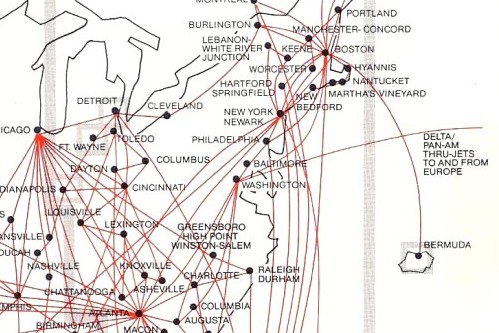 TWA and Eastern (see top image) also participated in interchanges to a lesser extent.  Still other interchange services involved international routes.  From the early 1960s through the mid 1970s, Braniff operated an interchange with Pan American from Dallas to London via Chicago using a Pan Am 707.  During the same period, Delta and Pan American interchanged from Atlanta to London over Washington Dulles, first with Pan Am DC-8-33s, and then later, alternating 747s.  Braniff and Delta eventually got nonstop authority to London.  The last round of interchanges came about thanks to the North Shore oil find in the 1970s; this time Alaska was the destination and Seattle the interchange point for flights from Denver, Houston, and Dallas.  Braniff interchanged with Alaska and Continental with Western.  These interchanges lasted past deregulation, with American taking over and operating the interchange with Alaska into the early 1990s. 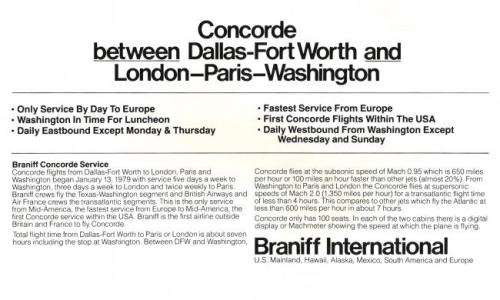 There is one more unique interchange of note:  In 1979, Braniff and British Airways began a Concorde interchange from Dallas/Fort Worth to London Heathrow via Washington Dulles.  At the same time, Braniff and Air France began a Concorde interchange.  The domestic portion operated with Braniff crews at Mach.95, just under the speed of sound.  Three flights a week operated to London and two a week to Paris.  The service lasted a little over a year.

The interchange era illustrates the convoluted means by which airlines operated under the CAB.  Fortunately, Texas and California with were big enough to have attractive intrastate routes, and Southwest, along with PSA and Air California, served as laboratories for a new way to operate.

stove
Not applicable
My favorite part of Nuts About Southwest - Flashback Fridays!
10 Loves