Flashback Fridays: A New Beginning at Love Field on January 13, 1974

In last week’s installment, we looked at the areas of Love Field that were abandoned by the other airlines when they moved to the DFW Airport on Sunday, January 13, 1974.  This week, we look at how, on that Sunday, Southwest began remaking the terminal to suit its needs. 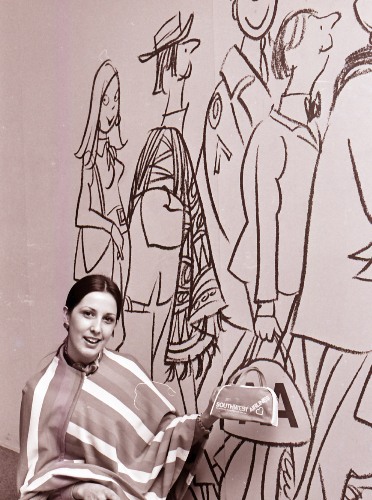 We begin with this photo that symbolizes the transition between the old and the new.  Back when American Airlines was headquartered in New York City, they used drawings like this, similar to those in New Yorker magazine in some of their ads.  This drawing was in the upper level passageway from the West Concourse to the baggage claim.  Mary Cuca, one of our Flight Attendants, wears the original uniform with the poncho to add some sophistication to the scene.  We see her holding a Southwest travel bag in front of the “AA” travel bag in the drawing. 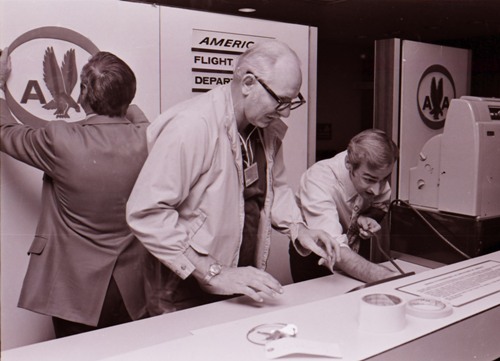 At the gate areas, other reminders of the previous occupant had to be erased in a more permanent fashion.  Behind the gate podium, we see the American logo displayed in two places on the backdrop, and “American” above the flight number.  Moving day was an “all hands on deck” event for the two and a half-year old airline.  Dallas Station Manager Carl Warrell (with his back to the camera) is working on the signs, and Bill Franklin, Vice President in charge of Customer Service at the airports and Reservations Centers (light colored jacket) is helping Dallas Assistant Station Manager Jack Mercer string the wires for the Love Ticket Dispenser (otherwise known as an NCR cash register).Carl recently passed away, and our thoughts are with his family. 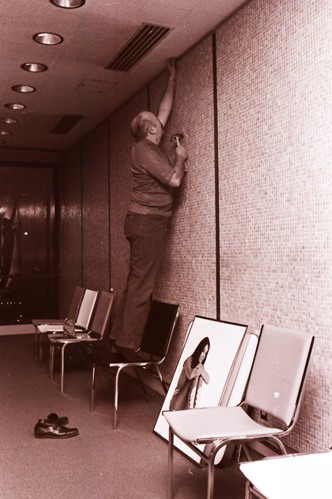 Meanwhile, Bud Herring, our Vice President Inflight back then, is helping to put the Southwest touch on the walls of the gate area.  On the floor next to the chairs are some of the framed posters that would go on the wall.  American was the first airline to modernize their concourse at Love Field.  My family moved to Dallas in 1967 and the construction was under way then.  (During the construction, I was meeting a family friend with my parents, and I saw a very young Glen Campbell in the temporary gate area near where Gate #1 is now.)  Consequently, American’s efforts were designed to be more permanent than those on later concourse renovations like the North Concourse.  One example of this “permanence” is the tile on the gate area wall. 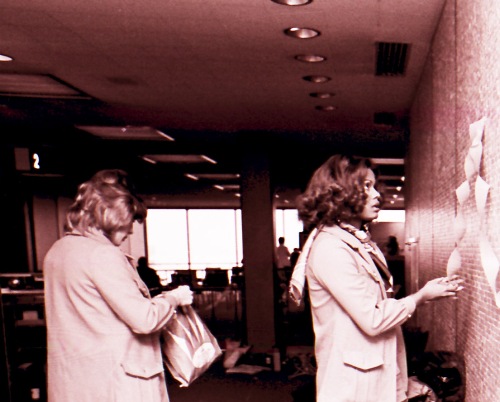 The photo above appears to be the area across from Gate #2, which is currently occupied by Chili’s Too restaurant.  Notice the Gate #2 sign above and behind the Employee on the left.  These Flight Attendants are decorating the wall with paper ribbon.  Interesting side note:  Our Flight Attendants would only wear these original uniforms a few more months until September 1974, when a new hot pant design with a polka dot blouse is introduced. 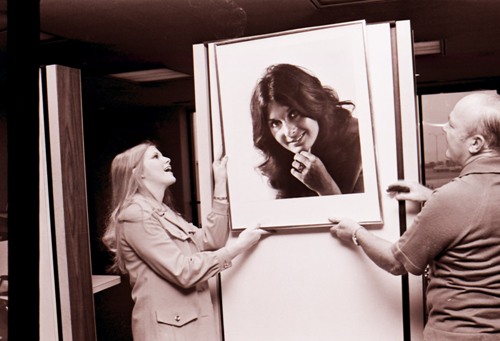 Bud gets some help from Lovie Wallace in hanging one of our iconic posters over the old American logo behind the gate podium.  During the mid-1970s, these posters featuring our Hostesses (the title back then for Flight Attendant) were located behind our ticket counters and gate podiums, and this poster is a picture of Cathy Rabon. 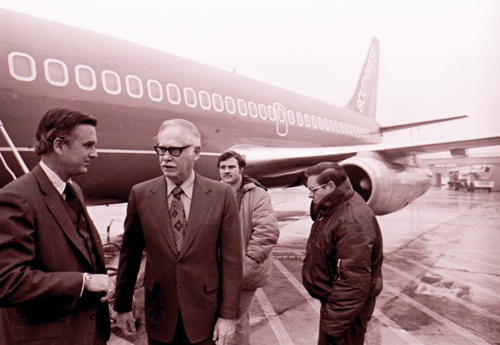 If you will think back to last week’s Flashback Fridays, we had a picture of the ramp area around Gate #1 blocked by American ramp equipment.  There was no way to get an airplane up to the jetbridge.  The photo above shows the solution.  The airplane was parked on the “back side” of the concourse, and air stairs were used for deplaning and boarding.  Overseeing the process are Cofounder Rollin King and Southwest’s first President, Lamar Muse.  To the right of the picture with his collar turned up to block the wind is original Mechanic Jim Hutchins who was hired a month before Southwest began service.  The North Concourse is visible behind the aircraft, and this helps locate the scene.  This is either N21SW or N22SW (since it is a non-advanced -200 without a cargo door), and the photo shows that the word “Airlines” has finally been removed from the tail.  Again, its obvious that this is a raw, wet day. 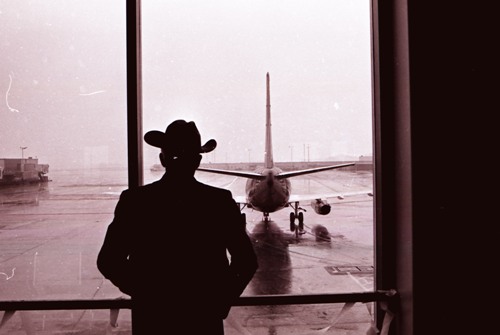 We close this look at moving day with this very “Texas” shot, as the man in the cowboy hat watches our flight taxi away from the terminal.  The gates on the left at the very end of the concourse will remain empty for a while until Southwest builds up its Love Field schedule.  The outer end of the North Concourse is in front of the aircraft.  Inflight Training will eventually occupy that part of the North Concourse.  However, on this day after the airlines moved to the DFW Airport, the Love Field terminal has fallen silent (except for the two Southwest gates and new ticket counter) for the first time since it opened 16 years ago almost to the day on January 20, 1958.  I want to mention special thanks to Original Flight Attendants Deborah Stembridge and Sandra Bogan, and Original Employees Dan Johnson and Willie Wilson for helping me with the Employee identifications.

Next week, we have a guest blogger, Jack Wild, a Boston Operations Agent, who will salute Independence Day by sharing some vintage views of the airport that serves the birthplace of the American Revolution, Boston Logan.