Flashback Fridays: Is That a Southwest Airlines Airplane?

A while back before "Flashback Fridays" began appearing on our SWALife Employee blog, I took a look at some Southwest airplanes that wore Southwest titles but kept the basic livery of their previous operator.  Thanks to Phoenix Flight Attendant Les Isaacowitz, I can both share some additional photos of one of those aircraft for both audiences.

Keep in mind that, back in the early 1980s, Southwest needed aircraft faster than Boeing could produce them, and we did some short-term leases of 737s from other carriers like Continental and Frontier.  One aircraft from that period had an especially unusual Southwest career, and it was a 737-2Q8 that wore the Belgian registration OO-TEM.  It was originally delivered to Trans European Airways (TEA) a Belgium-based charter airline in 1979.  It was subleased to Southwest from 1981 to 1983, and then went on to serve a variety of carriers from Vanguard and America West in the U.S. to British Midland and the Hungarian airline, Malev.  On February 12, 2010, I did a Flashback Fridays about this aircraft serving as both Cupid One with a Cupid drawing on the nose and as Rudolph One with the red-nosed reindeer on the nose. 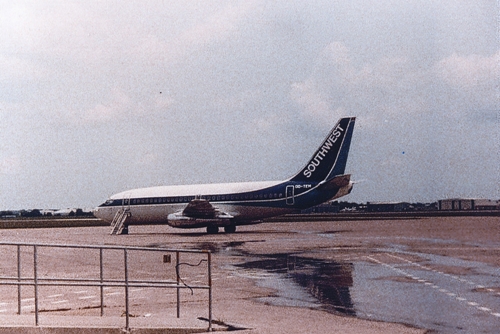 As an Operations Agent back then, Les was able to get these shots of OO-TEM both at his airport, Houston Hobby, and during his travels.  The above photo is of OO-TEM at Gate 4 in Houston, and it dates from July 1981.  We can see that the large “TEA” markings have been removed from the fuselage and painted over on the tail. 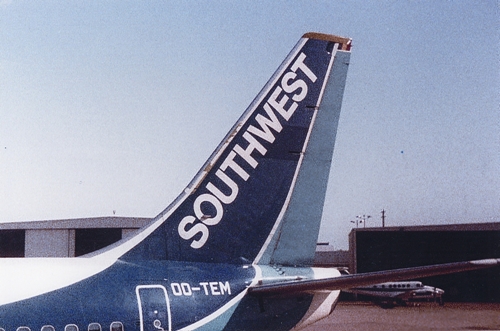 Les and his camera caught up with OO-TEM again in February 1983 in a couple of cities.  The photo above shows the aircraft parked at Dallas.  Contrast the tail markings in this photo with the photo at the bottom of the page. 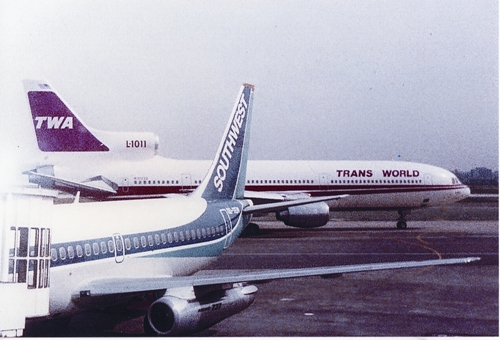 That same month, Les shot the well-traveled 737 at San Francisco International as a TWA Lockheed TriStar passes behind.  (Just as an aside, the L-1011 was my favorite wide-body aircraft of all time.)  Shortly after these two photos were taken, OO-TEM was being prepared for return to TEA. 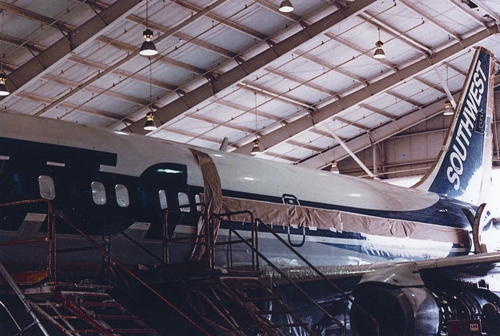 Les’s notes show that this photo (and the one at bottom) was made in 1984; all the references I checked state that the sublease from TEA ended on April 30, 1983.  In fact, OO-TEM was flying with America West in October of 1983.  Before returning to TEA, we had to replace their fuselage logo, and this was done at our Dallas Maintenance Base. 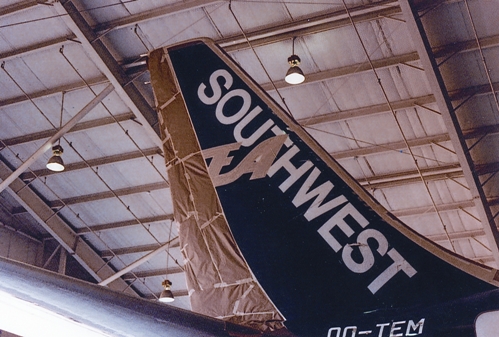 The tail logo also had to be restored, and we see the TEA masking on the vertical stabilizer.  The TEA logo on the tail is in white, so I am guessing that the blue will be sprayed on first to cover the Southwest title, and then the TEA will be filled in with white. Thanks again to Les for sharing the photos, and in the future we will look at some of his other subjects.

Scott_Johnson
Not applicable
I think this aircraft had an unusual, for us, seating/galley/lav configuration. It was decided to leave it as is since replumbing would have been a nightmare. It had full hot galleys fore and aft and an odd lav configuration. Amazing what pops into your head when you see this stuff...almost spilled my rum.
11 Loves