Flashback Fridays: More Odds and Ends From the Picture Files

In my recent “file diving,” I’ve uncovered some interesting photos that, by themselves, couldn’t support an entire post.  However, they are interesting enough to be shared, so I put this “hodgepodge” post together in the spirit of the old variety shows that once were a network television staple—a little Topo Gigio, bit of Señor Wences, and close with The Beatles. 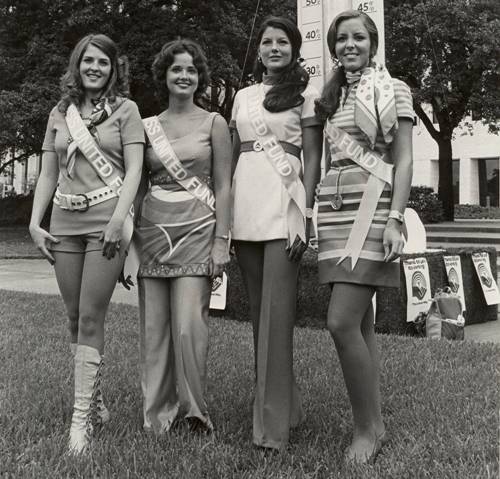 We open with the bevy of beauties above.  It dates from the early 1970s (probably 1973), even before the DFW Airport opened.  We have Flight Attendants from four of the airlines serving Dallas wearing United Fund sashes in support of the annual United Way drive.  Southwest Hostess Janice Kingsley on the left is joined next by a Braniff Hostess, then a Delta Stewardess, and a Continental Hostess, and I think the uniforms reflect the personalities of the various airlines back then.  A key point of the photo is that it shows our concern for our communities stretches back to the very beginning of our history.  On a personal note, three of these four airlines have played an important role in my life. The four airlines also had deep roots with Dallas.  Besides Southwest of course, Braniff was headquartered in the city.  Delta's very first flight originated at Love Field (Atlanta would join their system a few years later), and Continental had merged in 1955 with Pioneer Air Lines, which was headquartered at Love Field. 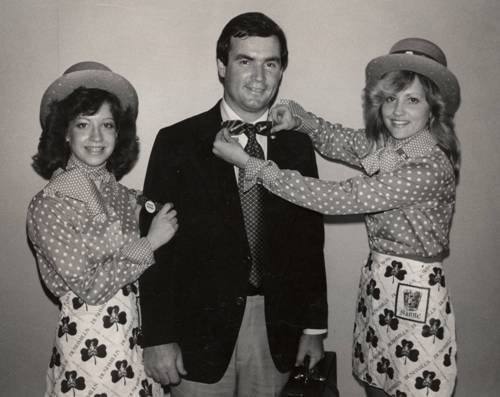 Next from 1977, we have a valuable fashion lesson—never mix patterns.  If you haven’t gone cross-eyed from those polka dots and shamrocks, here is the caption that ran in our inflight magazine, the Southwest Airlines Magazine:

From about the same period, we have the following photo from our Lubbock Station: 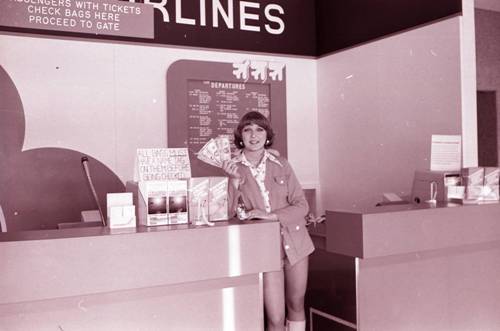 The Ticket Agent in the photo is a friend of mine, Cynthia Penley, who is currently the Executive Assistant for Bob Montgomery, our Vice President Airport Affairs.  Cynthia had won cash in a program to come up with money-saving solutions, and this photo, which was shot at the Lubbock Ticket Counter, was for our Employee magazine LUVLines.  It’s one of the few early photos I have found of our Lubbock operation. 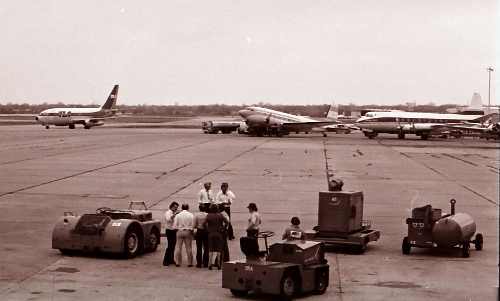 The photo above offers three aeronautical oddities sure to please any “avgeek.”  The 737 wears the Belgium registration, OO-TEM, and it was leased from Belgium’s Trans European Airways from 1981 to 1983.  I’m guessing this was taken early in the lease before Southwest titles could be applied to it.  The middle airplane is a Super DC-3.  It was an attempt by the Douglas Company to update the basic DC-3 after World War II with a longer fuselage, a square tail, and more powerful engines.  With three examples, Capital was the only commercial operator, but the US Navy used about 100 of them as the C-117.  Later, they became executive transports.  The other rarity, at least for a US airport at this date is the Vickers Viscount 700 on the far right.  The British-made Viscount was the world’s first successful jet-powered aircraft (it was a turboprop), and the 700 was widely used by foreign airlines like British European (BEA), Air France, and Air Canada.  Ironically, given the Super DC-3’s association with them, Capital had a large fleet of Viscount 700s here in America.  After service with United (who merged with Capital), many of the 700s were, like the Super DC-3, used as executive transports.  Even the late singer, Ray Charles, owned one. 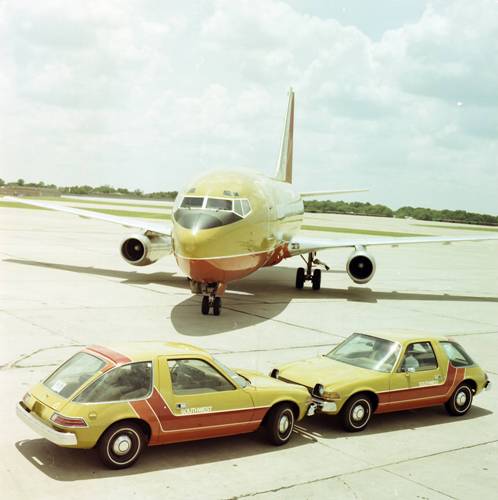 From machines with long lives like the Super DC-3 and the Viscount 700, we close with “less-than-classic” Gremlins and Pacers.  Back in 1976, our Marketing Employees acquired these American Motors cars for sales calls, and they were painted in Southwest colors.  I’ve always wondered what kind of confidence they instilled in a potential new Customer as they rolled up to the door on sales calls.  I guess that’s one of the fascinating contradictions with history, sometimes you drive a Gremlin, and other times you are carried by a thoroughbred like the 737.

Anonymous1738
Not applicable
I'd like to see Southwest recreate this scene by welcoming the next 737-800 with a couple of Pontiac Azteks painted in canyon blue.
13 Loves