Teresa3
Explorer C
That's such a great story! My husband and I had a long distance relationship and we traveled between Chicago and Birmingham to see eachother. We relied on Southwest because it IS cheaper than the rest. The distance between our homes to the airports was a pain but it was worth it. Southwest is such a great airline and the staff is always so friendly. I wouldn't fly any other way!
6 Loves

Heidi6
Explorer C
My husband I are in a long distance relationship right now. He is in Saint Louis and I'm in San Diego. We go back and forth every month to see each other and I LOVE Southwest. Southwest Airlines is quick and easy, I've never had a bad experience and its my ride to my honey! Love you, Southwest!!!!!
5 Loves

pberg
Frequent Flyer B
A long distance relationship is what actually led me to my job with Southwest! I was dating someone who lived in another state, and we were spending so much money on airline tickets that we used to joke that one of us needed to get a job with an airline! I was living in Austin at the time, and it turned out that Southwest Airlines was headquartered just up the street in Dallas. I applied and got the job. I thought I would only stay for a couple years, enjoy the flight benefits, and then move on. Turns out I had it backwards. The relationship, unfortunately, only lasted another year or so, but my relationship with Southwest is nearing a decade! Paula Berg Southwest Airlines
5 Loves

liza
Explorer C
You guys have definitely kept me and my boyfriend's LA- Houston relationship alive! We fly just about once every 3 weeks, and the rates are unbeatable! The Southwest Rewards points program is also the best that the two of us have experienced. It's unfortunate that the college rewards program is now discontinued, but we both saved so much because of it while we were in school! Luv you guys
5 Loves

kristi
Explorer C
Such a great story! Thanks for sharing.
208 Loves

Andrea_Almost-B
Explorer C
hey me too! this past weekend my fiance moved to phoenix from pasadena, finally ending the long-distance element of our relationship, which we've had for the last 13 months. southwest was the ONLY airline we flew to visit each other. my fiance would often joke in the SWA commercial voice "this relationship is made possible by southwest airlines. you are now free to fall in love across the country. ding!" we earned and used rapid rewards points, put everything on our southwest credit card, and always flew SWA. thank you for being not only the best priced airline, but also for being the friendliest and most reliable, not to mention the best at customer service, with awesome credit/exchange/cancellation policies to help us out when we needed to switch out plans around. you've ruined us for any other airline. we LUV southwest!
209 Loves 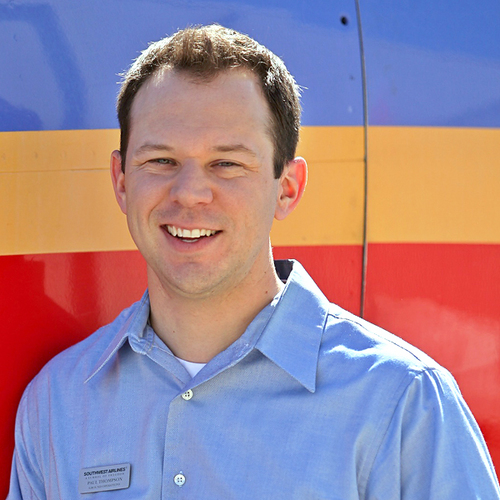 pthompson
Explorer A
My wife and I were engaged when I was hired to work for Southwest in 2001. I came to Dallas to work while she finished school in Houston. My flight privileges as an Employee allowed me to see my sweetie almost every weekend. A few weeks before the wedding on a Friday afternoon, my co-workers threw a surprise wedding shower for me - and my fiance was in on it! They had secretly flown her up for the party! Over the 8 years I've been at Southwest I've heard dozens of tales of passengers meeting their future spouse in the boarding area or while sitting together on the aircraft. It's a very good reason why our open seating policy is so well-LUV'ed.
207 Loves

Anonymous207
Explorer C
I was in a log distance relationship as well and Southwest was always there. I had to commute between Berkeley and Providence! We had to do that for two years. But now we live together and are planning children already.
209 Loves

Lauren6
Explorer C
I recently got married to my long distance boyfriend who was attending law school in St. Louis. If not for Southwest, my trips from Baltimore to St. Louis would not have been easier. The flights were consistently on time. The flight attendants were extremely hospitable and personable. I have truly appreciated my experience with Southwest. Now, we are relocating to Jacksonville, so I look forward to flying home to Baltimore on tour airline quite frequently. Thank you!!
210 Loves

Jackie3
Explorer C
What a great story! My boyfriend and I have been together for three years, and I'm currently in college 3,000 miles away -- the college rewards program let him visit me for free twice already (he's coming for his third trip at the end of August) and I am been so grateful. Plus, we both love Southwest -- I can't imagine flying any other airline. By the way.. can we get bulk packages of peanuts too? We love those honey-roasted nuts so much we have to ration them every time we fly. It's always worst in the winter when we only get regular salted peanuts (still good, but they can't hold a candle to honey-roasted!).
211 Loves

Artie
Explorer B
SHUT UP SHUT UP SHUT UP!!!!!!!!!!!!!!!!!!! Those are my friends!!!!!!!!!!!! I have been there since the BEGINNING (almost ELEVEN years ago!) lol. I read the Southwest blog regularly, but must admit that the last couple months I have been super busy with third year med school hospital rotations and studying for board exams so I hadn't been on the site in a while. Imagine my surprise to see a big amazing picture of my friends on the site! lol. I was at the wedding, too!!! (Couldn't fly SWA because you weren't flying out of LGA yet in May :) Listen - I need you guys to stop doing amazing things like this for your customers because they make me regret turning down your Flight Attendant training offer to go to med school instead. My friends know the story of why...my mom, God bless her, asked me very nicely (well, kind of told me) that she preferred me to go to med school...but to this day I wish I could be a flight attendant, just for a month! lol. Thank you guys for awesome employees like the ones who gave my friend the peanuts on her flight and for always putting your customers on top. You rock!
209 Loves

Mike_Briney
Explorer C
I was wondering if there is a way to get Southwest peanuts? My Fiancé and I met on a Southwest flight back in 2008, and thought it would be fun if we could get the peanuts for the wedding.
209 Loves

Michaela
Explorer C
Southwest should consider releasing a book of all the "happy unions" it's been a part of! The Southwest cabin crews always make me smile and laugh with their positive attitude and sense of humor, it would be great if Southwest decided to publish a book (or even do a documentary!!) of stories from the clouds-it would certainly provide some much needed cheer these days 🙂 LUV you SWA!
209 Loves