At Southwest Airlines we do things differently, and we have an absolute blast OWNing the art of Legendary Customer Service.  Employees know this, and it’s spreading faster than T.J. LUV, through the hearts of the public.  With our extraordinarily vast network of People working and volunteering for heartfelt causes every day, there’s no quelling the SWA crusade.

Customer Russell Tucker of Vermont, familiar with our Servant’s Hearts, reached out to Customer Relations in early December on behalf of his dear friends (and our Customers) Karen and Darcy, two sisters with a painful bond.  Karen would be flying SWA from Albany to Tampa to support Darcy in the fight for her life, a double mastectomy.  In 2004 their mother and Darcy’s twin sister Debbie both lost their battles—two weeks apart—to the same formidable strain of cancer.

Darcy’s cancer was detected in May and put her life to an abrupt halt.  As a single mother, one of the toughest demons she’d have to face was her own strong work ethic—for the first time, an unwise ally.  Truly, not everyone is blessed with health insurance, and this is the case for Darcy.  In an attempt to offset the high cost of being unable to work during cancer treatment, Karen opened a Give Forward fundraiser for Darcy online.

Russell hoped we could offer Karen some support and encouragement for the trip down.  Well we did that and then some!  The Albany Station was honored to be involved.  John Ryckman and his Team summoned their fierce Warrior Spirits and seriously got to work.  Karen arrived at Albany International on the morning of December 17 to an astonishing welcome. 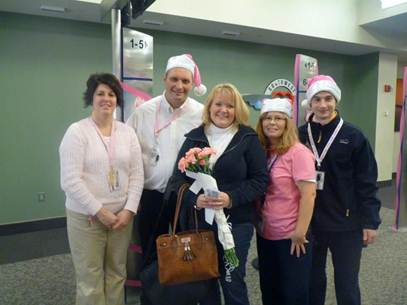 Not only had our Agents decorated the gate area pink, but also themselves with pink clothes, Santa hats and breast cancer lanyards!  To her surprise and delight, even the Ramp Agents tie-dyed their shirts pink (pictured at top)!  Karen was presented with a bouquet of pink flowers, and every passenger was given a pink carnation with a tag to follow Darcy's progress on Team Darcy Facebook page. 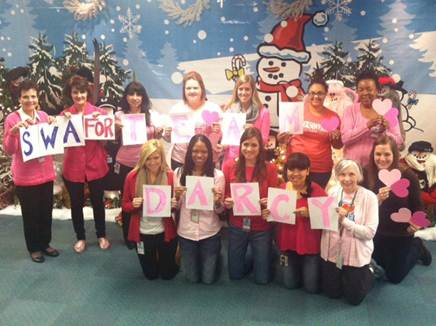 People started talking (and e-mailing!), and soon Team Darcy’s stagnant 89 Facebook “likes” soared over 100, 200 then 300 “likes”!  The story spread from Albany Co-Hearts to Dallas Headquarters to our Reservations and Call Centers.  Employees at Headquarters wore pink and made signs to support Darcy on the big day.  There were even a few LUV donations from Employees to Darcy’s Give Forward fundraiser!  What began as a simple request for perhaps an onboard acknowledgement turned into a spectacular reception and a viral social media phenomenon!  Of SWA’s support for her family, Karen posted on Facebook, “Can I just say wow! I do not think I have ever seen any organization of employees who just send such encouragement to a total stranger! God certainly works in amazing ways.” 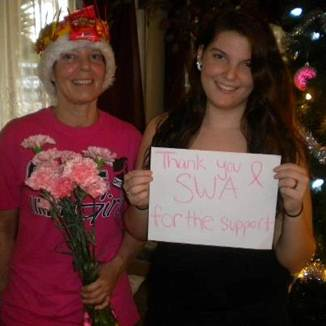 With loving prayers from friends, family and SWA Employees, Darcy underwent surgery on December 18.  She was declared cancer free by Christmas.

Though she has months of therapy ahead to ensure this disease is truly gone, she has found that the love and support of those around her have motivated her and given her courage to beat this.  Darcy has completed chemotherapy but is struggling in her return to work as a waitress due to neuropathy that chemotherapy has caused in her hands and feet.  She was so eager to go back to her job but found on her first day back that this numbness became debilitating.  The weakness in her wrist made it impossible to carry the load she was accustomed to.  Though she is pushing herself, it will be a long healing process.  The bilateral mastectomy has been easier to heal from!   Darcy is one of the most positive and spiritual women you could meet.  She will push through this and loves to hear from folks as it motivates her through the day to day.

More on Darcy’s progress is being tracked via the Team Darcy Facebook page.