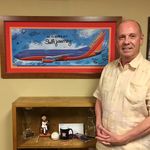 View all badges
Topics RLTrevino has Participated In

by RLTrevino |
New Arrival
in Blog
2 Loves
2 Loves
In the early 80s, I was flying Southwest Airlines to Las Vegas as I had done many times before. I was reading their inflight magazine when I came across the Southwest route map. As I looked at the map, I thought, wouldn’t it be nice to visit every city that Southwest visits? At the time, Southwest was providing service to an extensive network of cities, but I decided then and there that I would visit every city pair that Southwest flies and as an added bonus I would try to do it over a weekend, any weekend.     Well … more than 30 years of weekends later, Southwest has become the envy of the airline industry and has created a business model that is second to none. They have more than doubled their network and I am sad to say that my original goal is now impossible to achieve. So, my original plan has changed. It will take a little longer, but I will fly to every city Southwest Airlines flies to. What has not changed though, is my love for flying, my love for Southwest Airlines and the Boeing 737. In fact, I have grown more passionate about all three with each passing day. I cannot think of a better way to spend my time.   So if I may say, let’s kick the tires and light the fires, push back from the gate, and lineup and wait. Ding … I am now free to move about the country. Why do I Luv Southwest Airlines? Let me explain it with this analogy:   Southwest Airlines and Baseball The game of baseball has not changed much since its inception and neither has Southwest Airlines. Technology has affected both, but they have adapted and both have grown more popular because of it. When I step into a baseball stadium and take my seat, I’m taken back in time. Outside, it might be the 21st century with technology and social media beating at your door. Anxiousness and responsibilities are commonplace. But here, here in the bowl that time forgot, most everything remains the same. There are still eighteen players, three bases and a home plate on the field, a bat, a ball, and an umpire who everyone hates. The meal of the day is still a dog and a beer, and it’s chased with peanuts and popcorn. It’s common to see four generations of one family sitting together. I am safe here. I find comfort in the beauty of the game. It’s perfect. There is no need for change.   Southwest Airlines began with three aircraft, serving three cities. Its mission, to provide safe, reliable, and affordable service for its Customers, was simple. They did this by buying one aircraft, the 737, the perfect equipment for its point to point service. They hired Pilots, Crew and support staff with one goal in mind: Find people with honor, integrity, and a willingness to work together. People that will acknowledge and support each other. Over the decades, this has proven to be the perfect mix. Their dedication to service has grown the airline to more than 700 aircraft, more than 54,000 Employees, and 101 cities. This growth has not changed anyone or anything within the Company. It still flies point to point, ontime, with the same, but updated variants of the 737. Southwest still has the same Fun-LUVing, dedicated Crew and support staff. I find comfort in that, in the air. It’s perfect. There is no need for change.     WHY? I've been struggling to come up with a name for this effort. Why am I doing this? Is it a journey, a quest, an adventure? Is it an attempt to keep a promise to myself? To prove to myself that it can be done. I've called it my Everest. Everyone who made it to the summit can claim that record. Is it an attempt to sail around the world in search of a record? How many people have walked, jogged, hiked, or hitchhiked from the Atlantic to the Pacific? Does anyone remember anyone who has attempted these challenges?   For me, the answer is simple. I'm doing this because I want to. I want to prove to myself that I am up to the challenge ... and I LOVE TO FLY!!!   As of November 30, 2017, I only have 18 domestic cities left to cross off my list! I’ll update this blog as I continue to visit more destinations.   Birmingham, AL Little Rock, AR Tucson, AZ Long Beach, CA San Francisco, CA Fort Myers, FL Jacksonville, FL Panama City, FL Pensacola, FL West Palm Beach, FL Des Moines, IA Wichita, KS Louisville, KY Charlotte, NC Portland, OR Charleston, SC Memphis, TN Spokane, WA   ... View more
Categories: