A Marine Marriage Proposal in the Air

Working in Customer Relations at Southwest is a unique experience, and, each and every day, I have the opportunity to speak with Customers from across our system and learn how Southwest connects them to some of the most important moments in their lives.

Recently, I received a phone call from a man who started off the conversation saying he had an unusual question.  The man’s name was Weylon, and he explained he was currently a U.S. Marine in need of my help to propose to his girlfriend, Shannon.  As excited as I was for this young man, I was curious to learn why he wanted to propose to his sweetheart 35,000 feet in the air.

Weylon explained that he had met the love of his life on a previous Southwest flight a year ago, and he knew the only place to pop the question was in the place where he’d met her.  With tears in my eyes, I agreed that there was no better place than on one of our LUV jets!

Weylon had planned out the entire scheme.  He would break the news to his girlfriend, Shannon, that he would have to work on their anniversary and send her on a “girls’ trip” with a friend to San Francisco that weekend.  He would sneak onto their aircraft in disguise and, once in the air, Weylon would change into his Dress Blues while a Flight Attendant read his spiel.

"On our flight today, we have a couple that met on this exact flight a year ago.  Because of Military duty, one of them is on this plane alone,” the Flight Attendant announced.  ”Her boyfriend has asked that his girlfriend not be allowed to sit next to any cute guys—can I have Shannon Jones come to the front?"

Shannon began to blush and slowly walked up the aisle, Weylon appeared behind her from the rear of the plane holding a ring and asking for her hand in marriage.  Utterly shocked, Shannon burst into tears and said the word Weylon had longed to hear.  “Yes!”  Once the flight landed in San Francisco, Weylon and Shannon deplaned to a celebration in the gate area to celebrate their new engagement. 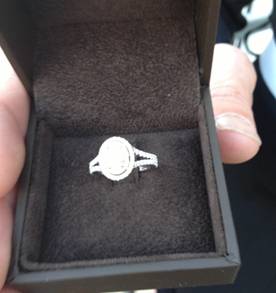 Because I was not working on the day of their flight, I asked Weylon to leave me a message about how his special proposal went.  I was excited and pleased to receive a voicemail from both Weylon and Shannon saying it went without a hitch and how thankful they both were to Southwest. 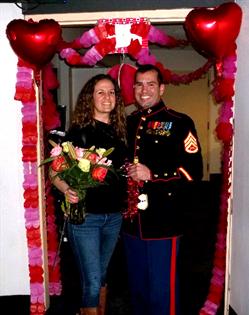 I was honored to be able to play a part in their magical moment, and I thank the other Southwest Employees who also helped to make it happen.  To know that this happy couple will forever remember their special day with Southwest Airlines—truly the LUV airline—is a proud feeling!