Fly to be Free

For the last 40 years, Southwest Airlines has been known as the airline that has allowed everyday people in this country to be “Free to Move About the Country.”  But, over a quarter of a century before the LUV airline took to the skies with a philosophy of being “Free to Fly,” there was a group of people who took to the skies over Europe with the philosophy of “Fly to be Free.”

Members of the Army Air Forces, the predecessor to today’s U.S. Air Force, bravely climbed into transports, bombers, and fighters during World War II to preserve the freedoms we have enjoyed in this country.  For almost five years, ordinary citizens found themselves in harm’s way on a daily basis in the air, where opportunities to become "heroes," although rarely sought, were far too frequent.

Recently, I was privileged to receive a letter from the daughter of such a hero.  Vickie Clark wrote to Southwest Airlines on behalf of her father, Lieutenant James Decker.  Although Lt. Decker is 88 years old, his memories of World War II are vivid, and he had a desire to once again be able to sit in the cockpit of a P-47D Thunderbolt as he did during the war.  Although he downplays the title of “hero,” he fits the role perfectly.  This modest gentleman spent four years with the 27th Fighter Bomber Group in the 523rd Fighter Squadron, piloting his P-47D through 69 missions over Germany, Spain, France, Italy, and Yugoslavia.  He also helped provide escort protection for General George Patton.

Being the son of a World War II Veteran myself, I am all too-aware that the advancing calendar is robbing us of the national treasure of our heroes faster than any enemy ever did.  Part of me has always felt the urge to stand and salute our Veterans, and this was an opportunity to salute Lt. Decker through some of that Legendary Customer Service for which Southwest Airlines is known.  We located one of the few remaining flyable P-47Ds at the Lone Star Flight Museum in Galveston, Texas, and began communicating with the Museum Director, Mr. Larry Gregory.  Due to concerns for Lt. Decker’s physical dexterity and museum insurance liability issues, Larry was unable to accommodate the request to climb into the cockpit, but he agreed to help us create a special time for the extended Decker family. 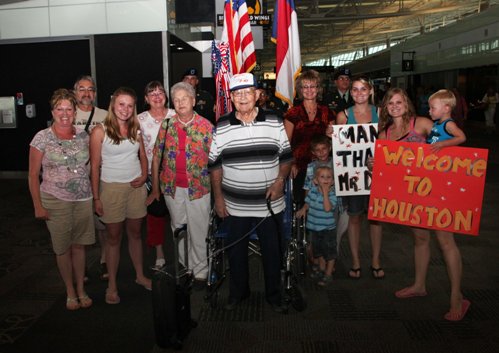 We were honored to provide two flight passes to allow Lt. and Mrs. Decker roundtrip travel to Houston for a well-planned event.  Many family members flew in and drove in to meet for the occasion, where they received a huge surprise at Houston’s Hobby Airport.  Our Assistant Station Leader at Hobby, Ms. Lisa Weigold, demonstrated an amazing amount of Positively Outrageous Service in organizing a very memorable reception in the terminal.  As the Decker’s SWA flight approached the gate, they passed under a traditional water cannon salute provided by the Hobby Airport Fire Department.  Our Flight Attendants escorted him off of the aircraft through a jetbridge lined with uniformed members of the Houston Police and Fire Departments into a gate area filled with cheering SWA Employees and Customers!  The U.S. Army Color Guard presented the “colors” (flags) and saluted a fellow soldier and Officer.  Our Employees and Customers passing through Hobby lined up for the chance to meet Lt. Decker. 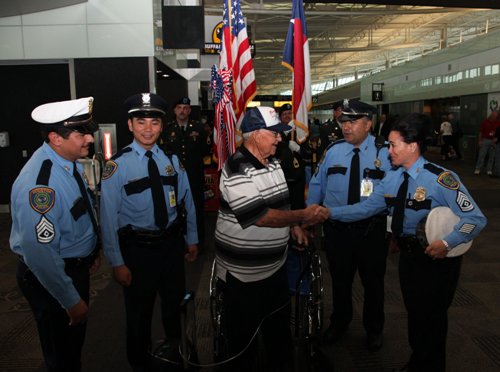 The next day, I was privileged to help welcome the Decker family to the Lone Star Flight Museum for a personal tour led by Mr. Gregory.  Of course, the main focus of the trip was the first stop on the tour.  Their beautifully maintained P-47D was the center of attention for the family, and for some, it was their first time to see in person the type of airplane that Lt. Decker had flown.  Employees of the Museum and unrelated visitors gathered around as Lt. Decker began telling stories of his time in a P-47D.  He gave unending praise for the design and workmanship that created a plane that, in his words, brought him safely back home from many missions.  After several hours in the Museum, one final tribute was ready. 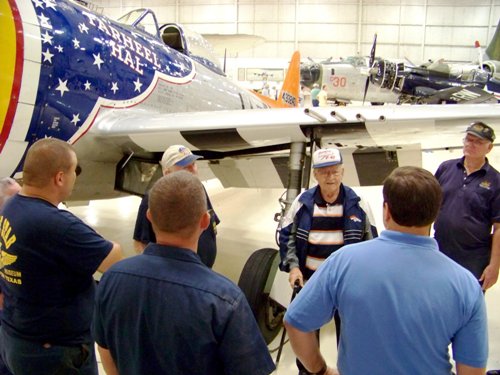 A rainstorm that had begun that morning finally cleared, and one of the Museum volunteers, Mr. Charlie Hainline, an Air Force war Veteran himself and current First Officer for Southwest Airlines, took advantage of the break in the storm.  The P-47D was towed outside and he started the engine.  For the first time in 66 years, Lt. Decker heard the distinctive sound of the Thunderbolt engine, and a wave of nostalgia washed over his face.  Mr. Hainline took off in the P-47D and for 20 minutes, made passes over the airport, giving Lt. Decker and his family a chance to see this famous plane in flight.  As the day came to a close, each of us took another chance to personally thank Lt. Decker for his service to our country. 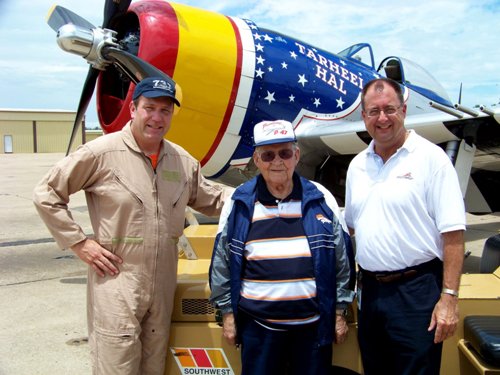 At a Company where our days are often focused on just getting travelers from “point A” to “point B,” it was a treat to step outside the box for a true hero.  One of the joys of organizing this event for the Decker family was seeing the fantastic way that so many Southwest Airlines Employees and Lone Star Flight Museum employees eagerly and willingly came together.  In their own way, everyone was able to express their patriotism and gratitude to Lt. Decker and other members of “The Greatest Generation” who faced such danger as they fought for our country and our freedoms.  A huge thank you to each of you for helping to give us the privilege of spending some time with a true hero!  We salute you, Lt. Decker!