It’s not often that one gets to meet a true American hero, let alone four of them! Just before Veterans Day, I had the privilege of meeting four Navajo Code Talkers at an event in New York City honoring them for their amazing work during World War II.

The Navajo Code Talkers were an elite group of Marine communicators. They were founded in 1942, following the Japanese attack on Pearl Harbor in late 1941. In the early days of the war with Japan, our codes were being broken by Japanese intelligence due to their knowledge of the English language.  And, since the Japanese had many communicators who were fluent in English, they were able to issue false commands to our troops, further undermining our efforts and costing many American lives.

Enter Philip Johnston. A civilian and a veteran of World War I, Mr. Johnston was the son of a missionary and had grown up on a Navajo reservation. He was one of about only 30 people outside of the Navajo nation that could speak their language. Navajo is an extremely difficult language to learn due to the fact that it has no alphabet. Mr. Johnston knew that the Navajo language could produce a code that would be difficult for the Japanese to decipher. He began to enlist young Navajo men to aid in the effort. Initially, 29 Navajo young men, some as young as 15 and most who had never seen the world beyond their reservation, enlisted in the Marines and formed the Navajo Code Talkers. Eventually, nearly 400 Navajo men enlisted and became Code Talkers.

The Japanese were never able to decipher the Navajo Code. Many military experts credit the excellent work of the Navajo Code Talkers with saving thousands of American lives, helping win the Battle of Iwo Jima, and helping to bring the war in the Pacific to a swifter end.

Since the Navajo Code Talkers’ mission was so highly secretive, their work went unrecognized for more than 20 years. Their mission was declassified in 1968, but it took until 2001 for true recognition to come when they were awarded the Congressional Medal of Honor. 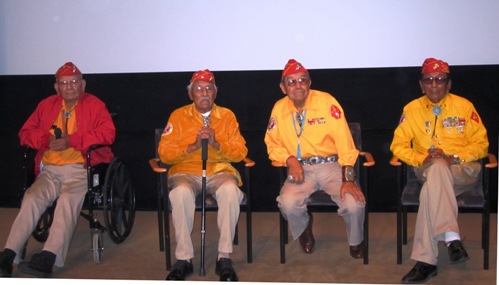 Southwest Airlines had the privilege of flying four of these heroes from New Mexico and Arizona to New York City. They were honored at a reception at HBO Headquarters in conjunction with Veterans Across America, and they were honored in New York’s Veterans Day Parade.

There are plans to construct a Navajo Code Talkers Museum and Veterans Center in Arizona. To learn how you can help and to learn more about these unique American War Heroes, please visit www.navajocodetalkers.org .

blusk
Not applicable
Patty thanks for telling the amazing story of these heroes! What an honor it must have been to get to attend this event and listen to their stories. Brian
13 Loves

Edie_Kelley
Not applicable
How do you adequately say "Thank You" to heroes such as these? May they be honored forever.
10 Loves

flight cancellation and re scheduling

Flying with a baby