On May 19, 2017 my 96 year old grandmother and her two senior citizen age daughters were set to depart Manchester, NH for a weekend trip to Orlando, FL for a family wedding the following day. The original departure time out of NH was delayed 2 hours and that flight had one stop in NJ to connect to final destination of Orlando, FL.

My Aunt specifically asked the customer agent, not once, but twice, if the connection would wait to depart NJ as the timing of take-off would not make sense to even take off as they would never make the connection. The agents assured them they would make their connection. This was important as I must reiterate that my grandmother is 96 years old and she had already been delayed two hours. In the event that she would be dealing with any further delays her daughters would have just cancelled the flight/trip and driven her home. After being assured by the agents that there would be no issue, they boarded the flight and were so happy as they would actually make it to the family wedding the next day.

Upon arrival in NJ they were told that the connection to Orlando had already departed. Keep in mind, as stated previously, had they known that this was going to be the case they would have never taken off on the first leg of the flight. The agents were so unfriendly and would not even get my poor grandmother a wheelchair or even a bottle of water. It was now after 11pm and all the food service vendors were closed. They couldn’t even assist them with services so that she could get something to drink or access to a facility to get toiletries as she is incontinent. They were told they could be rebooked on a flight at 4:45pm the next day however SWA would not be providing lodging or transportation for the evening so they were on their own. The family wedding was at 1pm the next day so this would have not even worked as the whole purpose of the trip was for the wedding. There were 5 flights out that morning with multiple seats so it makes zero sense why they couldn't accomodate and provide lodging. The first flight out the next morning was at 6:30am with a final destination to Orlando. On a side note, they met a couple that was re-booked on that flight without issue, no lodging provided but at least they rebooked without cost!

My grandmother is 96 years and in a w/c! I was so disgusted that they expected my mother, aunt, and 96-year-old grandmother to drive around a city they knew nothing about at midnight to find lodging and would offer zero assistance.

I called SWA and asked what my options were and she said my only option was to rebook them on the first flight out the next morning to Orlando. As mentioned earlier, another couple was rebooked for free so why is it that that same service wasn’t granted to them? There were over 50 seats available on that flight according the CSA.

It cost me a total of $1447.00 plus the additional $70.00 that was icurred to get early-bird to ensure they would be able to have one of them sit with my grandmother.

I have copied the below paragraph from the “SWA Customer agreement:”

“B. Disrupted Itineraries We will do our best to get you to your destination safely and ontime. Rare and unforeseen circumstances sometimes prevent us from reaching that goal. If that happens, your itinerary may be disrupted. Your itinerary is “disrupted” when you have departed from your “city of origin,” and, through no fault of your own, Southwest is unable to transport you to your destination as scheduled. In that case, you will be accommodated on the next Southwest flight(s) with seats available to your destination. You will not be charged any more money or required to purchase another Ticket.”

I am disgusted by the deplorable treatment of my grandmother and most likely other elderly passengers. The missed flight was not due to any fault of any of my family members and yet SWA did nothing to accomodate. It cost me over $1500 and when I spoke to customer service they offered me a $40 travel voucher. Tell me that's not a slap in the face?!!!!!

I have always loved the "flexibility" and friendliness of the SWA staff up until this point. I will never fly SWA again for the mere fact that my 96 year old grandmother had to be walked through the airport due to not having a wheelchair available, she was exhausted and had to sleep in a chair all night. SWA did nothing, I had to pay a large fee to ensure she would not have to endure any more travel delay! She traveled for nearly 18 hours and was told there was absolutely nothing SWA could do for her.

I'm rather curious if any info can be found regarding the reason for the delay which might help your case with Southwest.  Do you happen to have any of the flight numbers from the original reservation?  Most important would be the flight # for the first flight taken (the one you said was delayed).  As Southwest doesn't appear to go to NJ from MHT and there's a non-stop from MHT to MCO I'm struggling to find the info for your flights. 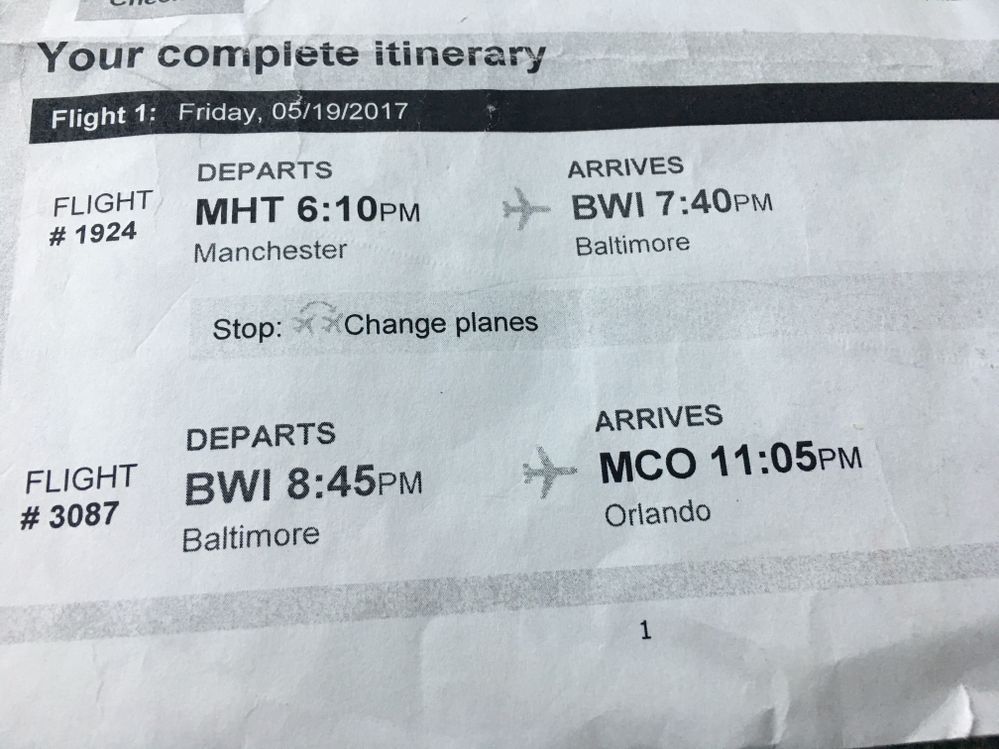 I apologize it was Maryland. BWI. This is flight. Thanks

I believe it was a weather related delay in BWI however my issue is, if SWA knew my grandmother would have no chance of making connection why would they even allow them to take off? It seems crazy to me to have her fly to BWI only to have to sleep at airport or make other accommodations on her own. Very sad.