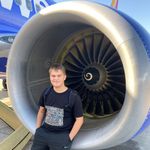 by Jacob_Waldroop |
Active Member
in Routes & Destinations
10 Loves
10 Loves
My name is Jacob Waldroop. You may remember me from last year. In October of 2017, I spent my birthday with Southwest Airlines and flew over 2,000 miles. This year, for my sixteenth birthday, I decided to return. We start off in Cincinnati just like last time, (which is where I'm from) The first flight was from CVG-BWI. The crew of this flight announced my name on the PA and mentioned Gary Kelly recognizing me for doing it last year. When I landed in Baltimore, someting unexpected happened. Multiple Southwest employees met me at the gate as soon as I walked out. They gave me a gift bag and told me about themselves. Then Patrick from SWA at BWI showed me around the airport and I got a behind the scenes tour of BWI. I met multiple Southwest employees and went back to the rooms behind the ticket counters for SWA. Patrick and I then met my friend Eden who flew in from RSW to celebrate his birthday with me too. Eden's was on the 10th and mine was on the 11th of October. Patrick handed us food vouchers so we didn't have to pay for food. Eden and I then boarded our plane to PIT. The flight attendant gave me a doggy bag full of snacks. It was so cool and creative. We then continued on the same plane to MDW. We were greeted by SWA people in the jetway. We walked over to an empty plane and sat in it for awhile. Eden and I were in the cockpit talking to a pilot brought in just to talk to us. His name was Nick Caulfield. We then went to the ramp and did the walk around for the plane. After the walk around we headed to the pilot lounge and met some cool guys there. Then we went to the parking garage to check out the city. Eden then flew home after that. I boarded my plane to BUF continuing to BWI. On this leg, the crew sang Happy Birthday to me and I got a crown made of pretzels and a toilet paper cake. It was so cool! After arriving at BWI I was down to my last leg, BWI-CVG. I talked to one of the flight attendants for a little bit and she gave me a safety card. Sadly, the end of the day had came. I landed back in Cincinnati. I flew on six flights that day adding up to 2,222 miles. It was the best day I've ever had. I just want to thank every employee involved in making my day so amazing. Most of them weren't even working but came in especially for me. SWA, you made mine and Eden's year. I LUV SWA! I'll be back next year for my third year of Southwest Birthday Trips. ... View more

Flying Southwest on my Birthday

by Jacob_Waldroop |
Active Member
in Blog
13 Loves
13 Loves
I’m a huge aviation geek, and Southwest is my favorite airline. I was even lucky enough to fly on the first Southwest flight to depart Cincinnati—I LUV SWA that much! So when my parents asked me what I wanted for my birthday in October, I could have said anything. But what did I choose? That’s right—flying Southwest! We booked flights across the country to several different airports. On my birthday morning, we started in Cincinnati. I boarded the flight and told the Flight Attendants how I love Southwest and aviation and why this is how I wanted to spend my birthday. After this, one of the Flight Attendants took me to the cockpit to meet the Pilots! I put on their headset and took a photo. They also let me turn on the APU, and the Flight Attendant gave me a brand new B737-700/800/MAX8 safety card, birthday card, stickers, and some Southwest gear. The Captain even wished me a Happy Birthday over the PA mid-flight!   After this flight, we took off on Flight 647, which was MDW to DTW to BWI. The Crew took a photo of me in front of the plane and told other Passengers about my birthday adventure. At DTW, I went into the cockpit again and met the Pilots. When we were taxiing out from DTW, there were two 747s on the ramp. The Pilot was quick to point them out to me over the PA—it was an awesome feeling, and I got a video of the aircraft.   The day wrapped up with a flight to ATL to MDW and finally, back home to CVG. At CVG, I talked to the Pilots and found out that one was a Cincinnati native (like me!) and took flight lessons at LUK, which is also in Cincinnati. Over the day, we traveled over 2,000 miles. I had the best birthday I could have imagined.   Again, I want to thank the Passengers, Pilots, Crew, Ground Crew, Customer Service Agents, and everyone who helped make my birthday so great. I also want to give a huge thanks to Southwest Airlines for making my day so memorable. ... View more
Categories: