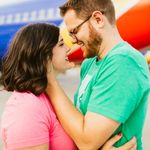 by jterlick |
New Arrival
in Blog
11 Loves
11 Loves
You've probably heard the Southwest tagline, “Behind Every Seat is a Story." It is a reminder that each seat is filled with real people having real experiences. My story takes place in seats 17a and 17b.     On April 8, 2017, I was enjoying my Southwest Employee flight privileges and taking a trip to Salt Lake City for the weekend. I ran into a few friends at the airport, and we started to discuss seating strategies for getting a drink sooner and taking pictures out the window. I had an “A” boarding pass, which is rare for me, so I wanted to make sure I sat myself in the perfect spot. When I boarded the plane, I initially sat in seat 17f, but I received a text from my friend telling me that the lighting would be better out the other side, prompting me to move across the aisle to seat 17a. I settled into my seat with my normal preflight routine of getting my camera out and my headphones ready. It was going to be another routine flight, but then it all changed.   Maggie was headed to Salt Lake City to visit Utah State University where she was contemplating attending grad school. She had spent the morning looking for her hiking boots and talking to her Dad, which caused her to arrive at the airport exceptionally late. She arrived to the gate as she was getting the final announcement to board the plane or lose her seat. I had just texted my friend that I had a window seat with nobody in the middle when a beautiful, frazzled, young lady plopped down next to me as directed by the Flight Attendant. We spent the whole flight talking nonstop. We both found it easy to be open and honest and had a wonderful conversation. We both admit we only remember bits and pieces of the conversation now, but we still very much remember how it felt. Maggie voiced concern during the flight that she was worried her bag wouldn’t make it since she checked it late. I reassured her as an Employee that I would go to baggage services with her and help her look for her bag. I, of course, knew Southwest would get it there, but I just wanted an excuse to spend more time with her. After we retrieved her bag, this is where I thought we would part ways. However, we had both rented from the same car company and walked there together, spending more time with each other in line. At this point, I knew this was something special. I was absolutely intoxicated by her. When we got our cars, we awkwardly parted ways. I hadn’t dated for a while and was rusty. I had given her my card with my number, so when she offered hers I said, “No, it’s okay. You have mine.” She still gives me a hard time for that one. She spent the whole week in Utah, Wyoming, and Idaho, and I went home. We texted every day and eventually agreed I would come back to Salt Lake City for the last day of her trip and take her on a proper date. It was an absolute blast and further affirmation that there was something real here. We both agree there were many things that fell perfectly in place to ensure we met. We later discovered we lived 10 minutes apart, and she had even worked at a store I frequented, but it took a Southwest LUV-jet to finally bring us together. Since that fateful flight, we have been inseparable and have continued our love for travel. We have visited Arkansas, Arizona, California, Colorado, Montana, New Mexico, Utah, Wyoming, and Argentina.      When it came to proposal time, I knew I wanted it to be aviation themed to honor how we met. I didn’t want to do a commercial flight because I wanted it to be more private. I convinced Maggie I purchased a Groupon deal for a charter flight around North Dallas. Since I am a huge aviation nerd, it didn’t faze her. On July 1, 2017, we departed from ADS (Addison) and flew around North Dallas where I had “Marry Me,” spelled out in lights. She was absolutely caught off guard, and it went flawlessly. She, of course, said yes, and the rest is history.     ... View more
Categories: