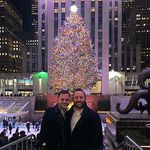 by devinandkevin |
New Arrival
in Blog
4 Loves
4 Loves
The following blog post was co-written by Southwest Customers Devin Cates and Kevin Livingston.   In December of 2011, Devin had landed a lead role to appear in Steel Magnolia’s new music video for the song “Last Night Again” During this same time, Kevin was working as the group’s personal assistant. Devin and Kevin connected from that video shoot. Our mutual love of country music was what really helped us grow this initial connection into a life-long friendship. A couple of years later, we became roommates and were enjoying life in Nashville.   In 2014, life interrupted our friendship as Devin moved to New York City. Though distance kept us apart, our friendship remained strong. We went almost four years without seeing one another. That is, until Southwest Airlines and Chase unknowingly reunited us in one of the most random, unbelievable, and perfect ways.   One of our favorite country artists is Brett Eldredge. One day, Kevin commented on an Instagram post of Brett’s that was promoting the new Southwest Rapid Rewards Priority Credit Card with Chase. Devin had also commented on the same post. Both comments shared how we both love our Southwest Rapid Rewards Credit Cards–no big deal, right.   Well, several months later, Kevin received a direct message from Chase via Instagram informing him that their team had seen his comment on Brett's page and selected him as one of the lucky contest winners. The Chase team proceeded to offer him a trip to New York City with Southwest to see Brett Eldredge's Christmas show at the Beacon Theater.    Kevin immediately texted Devin with the exciting news. No way was this really happening! Then, Devin checked his Instagram, and realized he had also received a message from Chase sharing that he had won tickets to Brett's show! How is this even possible? Two best friends who both love Brett Eldredge and both wind up winning tickets from Chase and Southwest! The next thing we knew, Kevin hopped on a Southwest plane from Nashville the next day headed straight to New York City.   So there we were with tickets to the show, a flight, and a hotel right next to the concert venue. This epic reunion was so unexpected! How did this even happen? It was a phenomenal Christmas surprise, all for simply being a Southwest Rapid Rewards credit card holder.    We have never been prouder to be Southwest Priority Credit Card holders! Thank you so much Southwest and Chase—this was an experience for the record books!  ... View more
Categories: