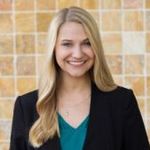 by cdaniel |
Not applicable
in Blog
3 Loves
3 Loves
LUV is definitely in their air as wedding season hits full swing! This is especially true for two of our Customers who found LUV at first sight at 35,000 feet three years ago.   On April 11, 2013, Brianna Rizzo caught a last-minute flight from New York to Nashville for business. Running late, she took a middle seat next to, then stranger, Daniel Brown, who was flying into the city for a wedding. As soon as the pilot gave the green light to use electronic devices, Brianna spent the next two hours focused working on her computer. It wasn’t until the plane’s descent that she and Dan exchanged their first words, and from there Southwest did what it does best—connected people. Over the next 10 minutes of conversation, the two discovered they shared several interests; but the most exciting, they found, was their shared fondness for all things Disney. Brianna says, “It was such an amazing connection, or should I say a ‘magical’ one!” The two exchanged business cards and went on their ways.   In between business meetings that day, Brianna received a text message from Dan asking if she would be his date to the wedding. Brianna gladly accepted and spent the night dress-shopping for the occasion. “Every time someone asked what we were shopping for, they would say, ‘This is crazy, like a fairytale!’” At the wedding, Brianna notes how welcoming Dan’s friends and parents were, and how they were elated that she shared the family’s love for Disney. The two danced all night and rounded out the evening downtown singing along with a crowd at a piano bar.   As fate would have it, Brianna and Dan shared the same Southwest flight home to LaGuardia on which they continued their fun by watching Disney Pixar’s Wreck It Ralph. However, the fairytale did not end there. In less than two years, the couple was engaged, and on May 7, 2016, the two got married in Las Vegas.   In addition to the Disney theme, Brianna and Dan were sure to give a nod to their special meeting on a Southwest flight by using Southwest Airlines cocktail napkins and heart stirrers during their reception!   Thank you, Brianna and Dan for sharing the details of your special day with us, and we wish you the best of luck in your future together!   Photo: J. Anne Photography     ... View more
Categories: