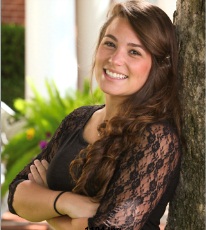 by bstrickland |
Explorer B
in Blog
2 Loves
2 Loves
“Seek out organizations where your skills are celebrated.” It takes a lot of spirit to pitch Mark Cuban, but tenacity is a quality Sherisse Hawkins has in spades. The loyal A-List Preferred Customer appeared on Shark Tank last year to show off her digital publishing concept of embedding dynamic content into text. Running her Denver-based company, Sherisse flies coast to coast, and she trusts Southwest to deliver her to her destination whether it’s for business or pleasure. Low fares might have brought her to Southwest, but it’s the ease of travel (and the honey-roasted peanuts!) that keep her coming back.    Why Southwest “The snacks, obviously! Southwest is the most genuinely service-oriented company I engage with regularly. The fact that they still feed you in this cost-cutting market proves that.” Memorable Moment “My husband left his new iPhone at the gate. It was returned a few weeks later with a hilarious poem from the Southwest crew.” Career Advice “Everyone has unique talents and strengths. Seek out organizations where your skills are celebrated, not just tolerated.” Travel Tip “Take one less thing than you think you need. I promise you won’t miss it.”   ... View more

by bstrickland |
Explorer B
in Blog
“You must be very patient, very persistent. The world isn’t going to shower gold coins on you just because you have a good idea. You’re going to have to work like crazy to bring that idea to the attention of people.” ­–Herb Kelleher   National Small Business Week reminds Southwest of its humble beginnings when we served only three cities and sold a plane just to cover costs. Southwest understands it sometimes takes a while to get off the ground, so we support the Warrior Spirit of local entrepreneurs the best way we can – by maintaining low-fares and expanding our route map to the places Customers, and their businesses, need and want to fly. In fact, Southwest Airlines was recognized as the 2013 American Brand Excellence award winner for best serving the travel needs of emerging businesses. We applaud our Loyal Customers who use Southwest to make their business dream a reality. Throughout the years, Spirit Magazine has highlighted such innovative small business owners and how Southwest connects them to customers, investors and even their families after long trips away.  Some may tell you the sky’s the limit, but we believe that for the entrepreneurs, small business owners and artisans, it’s just the beginning! Our Favorite Freedom Stories: Darren Hill, WebLinc Mark Bergman, The Bergman Companies David Nevins, Nevins & Associates ... View more

Top Ten Ways that We Have FUN at Southwest!

by bstrickland |
Explorer B
in Blog
8 Loves
8 Loves
Though we all come from different backgrounds and corners of the world, we all seem to share one thing – a LUV of Fun!  Whether we’re working behind the scenes at Headquarters or serving Customers in the terminals and in the sky, a Fun-LUVing personality is part of our job description. In honor of January 28th being “National Have Fun at Work Day”, here are some of the top ways we try not to take ourselves too seriously in the workplace. 1. Lots of companies urge their employees to stay healthy and exercise regularly—we get our workouts with our version of tug-o-wars in honor of Texas-Oklahoma Red River Rivalry weekend. Wonder who ended up pulling through? 2. Hanging out with mom or dad out on “Take Your Kid to Work Day” doesn’t always mean paperwork and meetings.      3. There are a lot of ways we could spread the word about no baggage fees, but we just can’t contain our excitement. Don’t be surprised if you see any of these Fun-LUVing guys loading luggage on your next Southwest flight. 4. We pride ourselves in not taking life too seriously, and holidays seem to be the perfect excuse to show off our silly sides. 5. Forget elevator music – we prefer live music at 35,000 feet. We bring back stage to center sta…-er-…aisle with artists like Plain White T’s, Gavin DeGraw, A Great Big World and more. 6. We’ll admit that we are children at heart who like to play just as much. We were all lining up for pictures and video games when Mario paid a visit to airports across the nation. 7. CEO Gary Kelly might take top prize for Fun-LUVing when it comes to his unparalleled dedication to Halloween festivities. 8. We’ve always thought of our Employees as Pros, and in the case of our Trading Places events, the Pros become our Employees!  From having the Orlando Magic mascot marshal airplanes to allowing the Phoenix Suns to scan boarding passes, we give professional athletes a taste of life as a Southwest Employee, and everyone gets to feel the LUV.   9. While these professional athletes are holding down the terminals, we have time for things like this ... And this ... 10. Most importantly, we LUV giving back to our communities. Whether it’s participating in environmental initiatives, granting wishes,  or honoring our veterans, our Servant Hearts find Fun in everything we do.      ... View more